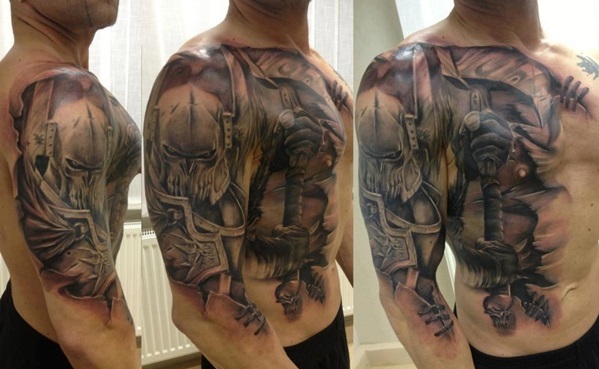 In 1095 AD, Pope Urban II called in the Council of Clermont at the beginning of the Crusades. In the spring of 1096, the crusaders set out in four armies under the leadership of French princes. The religion of Islam, founded by the Arab Mohammed in Mecca in 630, became a threat to Byzantium. Since the holy places of Christianity in Jerusalem were in the hands of the Arabs, the Pope called for the First Crusade.

In 1099, the Crusaders managed to conquer Jerusalem. The siege lasted five weeks. During this time, the crusaders set up a terrible bloodbath among the Islamic and Jewish populations. The goal of the Crusade has been reached and more than a million people are said to have lost their lives in this war.

The Seventh Crusade was also called Children Crusade. A crusade undertaken by French and German children, in which, seized by religious zeal, thousands of them marched to Genoa and Marseille, and died miserably on the way, or were sold as slaves.

With his appeal, the Pope gave new luster to the Christian knights. So the knights got a “task” that was universally recognized. Armed with an appeal, aristocrats like princes, counts, dukes and even kings and emperors suddenly became knights. Now they made war together with their subjects. The Pope had made Christ himself the supreme lord, and so suddenly it was no shame for the high nobility to fight side by side with lower-ranking men for Christ. Crusaders, therefore, felt like champions of Christ.

There was also the Christian or spiritual knight. He pledged to keep a vow. He accepted the monastic virtues: poverty, chastity and obedience. Spiritual knights were like fighting monks. Actually, these medals were created because it was necessary to nurse the sick and wounded of the Crusades. Over time, however, the medals switched more and more into the fighting.

In the Holy Land, three great religious orders of knights were created during the Crusades: the Knights of St. John, the Templars and the Teutonic Order. In them united the elite of the European nobility. Distinguish the orders of knights on their different colored crosses on coat of arms and chest: The Templars had a red cross on a white tunic, a kind of overhang. The German Order wore a black cross on a white background and the Knights of St. John a white cross on a black background.

With the death of the French King Louis IX. This ended the time of the Crusades. From then on there was no united desire to defeat Muslims in the Orient and drive them away from the holy places of Christians.

Thus, the last crusader casualties were attacked by the enemy, without their defenders received any significant support from Europe. After storming the city of Akkon in 1291, the remaining towns and fortresses were cleared without a fight.

Medieval thing of the past, replaced by courage, bravery and honor comes hypocrisy, laziness and cowardice. In memory of these brave young men aged and stuffed tattoos depict knights. Sketch of the tattoo with the image of a knight, usually done in realism, so it will look for a good specialist in their field.

Tattoo with the knight, like every fighter has never been meaningless. Knight is strong in body and mind, true to his ideals. For many centuries the knights of legends and ballads, stories and novels, poets devote their own songs and filmmakers to shoot historical films.

Meanings of tattoo of knights in the modern sense are courage, the ability to overcome all obstacles, morals and honor. Tattoo Knight Points out that the owner faces the blows of fate, able to endure significant physical pain, inclined to participate in the fighting, and often leave her in a winner.

The representatives of the underworld and former prisoners with respect for such a tattoo. The knight image on the tattoo is a symbol of true knightly qualities. Performed on the chest with a great tattoo of a knight is called “Strength and Loyalty”. The battle depicted on the blade knights represent remarkable leadership ambition tattoo bearers in relation to the criminal world and the desire to participate regularly in the various clashes.

Sketches of tattoos with knights, there is great variety. Knight portrays standing with a drawn sword and galloping on horseback, wearing banner and shield. There are pictures of whole battles of a knighted knight involved. Often created behind the knight fortress with towers, as a symbol of the family home or a city that protects the warriors. Some sting under the image label in the form of knightly mottos.

Tattoo often stuffed shoulder, chest, arm, back, shoulder blade or can be a fairly large scale covering the entire back or chest and miniature. Tattoo done in different colors: black and white, colored or reddish brown tones.

Tattoo Knight shows very good qualities of a real man, and he can become a reliable talisman to achieve happiness and success.

Hardly an epoch provides us with so many myths and legends as the Middle Ages. Whether dragons, magicians or noble knights, they all find their place here. And although this time may long ago have passed, yet find the deep meanings of the different motives of these days their way to our present.

The reasons for choosing a medieval tattoo are just as different as the variety of motifs itself. The Middle Ages Very often, character characteristics intrinsic to the motif are the initiator of such tattoos. Like, for example, Thomas, a banker and enthusiastic tattoo fan from Koblenz: »I let the knight stab me to always remember the good.

Especially in our time, I do not find it wrong to remind myself more often of people whose constant endeavor was to do good for others. The knight stands for strength, courage, helpfulness, honor and many more positive qualities. Of course, I am aware that the classic knight, as I have come to know him from the films of my childhood, never really existed. But in this respect, I’m hopelessly romantic and stick to the image of the noble, faithful knight.

On the one hand, medieval motifs on the one hand are shaped by our present ideas of those times that have nothing to do with reality (such as the wise old wizard, who in truth would probably have ended up as a heretic at the stake), on the other hand, some meanings are still based always on the original fears of the people, be it the fire-breathing dragon, who was the perfect beast of the brave knight as a beast, or demons, which celebrated a veritable boom in the “dark” Middle Ages, because with the power of the church grew both the fear the wrath of God, as well as the fear of evil demons, who could haunt the body of every man so pious.

But why are they actually “dark” middleman? Well, as a Middle Ages, historians call the dark section of European history between antiquity and modern times. Of course, the transitions between these epochs are fluent. In most of the texts dealing with the subject scientifically, the early Middle Ages begin with the fall of the Roman Empire, which was sealed by the Middle Ages.

However, the extreme structural changes of that time are also reflected in a massive loss of knowledge and culture throughout Europe. The tremendous architectural achievements of the Romans were reduced to rubble and ashes; the successive multitudes built on the rubble a new, much more primitive civilization, in which the scientific achievements made since the early civilizations in Egypt and Mesopotamia, the Greeks and Romans, were so perfect had been brought, almost completely forgotten and partly rediscovered much later.

Above all, the efforts of the early Christian monastery orders, it is due to not all knowledge was lost, because they collected and copied the ancient texts of the Greeks and Romans, translated them into Latin and preserved them as a precious treasure.