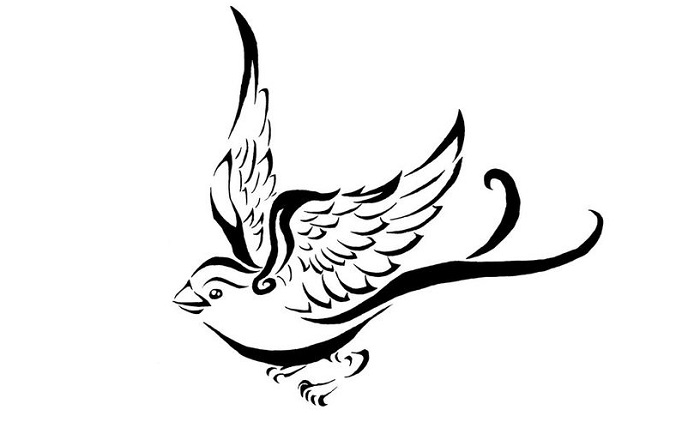 The first thing I have to warn you about is the fact that there is a big difference between a sparrow and a swallow, though many find it almost the same birds.

These are really different kinds of birds whose tattoos have quite a different meaning. You have to know them to choose the right one for yourself.

Swallows represent a traditional tattoo that symbolizes lasting love and the first time they have appeared as a tattoo and a sign of respect and loyalty was many times ago – during World War II.

Every year, with no exception, swallows returned to their homes, and it was considered that sailors, who were on the distant battlefields, away from their home, would surely come safely to their homes too, only if they tattooed a swallow somewhere on the body.

Swallows never go away far from their home,  because they do not like to leave home and their families, so they were a symbol of hope for all the sailors: they knew they were close to the firm ground and to their home if they noticed this faithful birds on their boat.

When a sailor had a tattoo of a swallow on his arm or chest, it was a sign that he had crossed more than 5,000 miles on his voyage, and a sailor who had two such tattoos had an experience of more than 10,000 nautical miles and was considered as a very experienced sailor.

For the sailor who died in the cavern, the legend said that the swallow would convey his spirit to heaven. Swallows were symbolling the true spirit.

The sailor who was so unfortunate to lose his friend on the sea tattooed a swallow with the dagger on his chest.

Swallows are known as the eternal symbol of love and constant devotion. Swallows had that title because they were always monogamous creatures. They spend their whole life with the same partner.

Many swallow tattoos are made with the nest. They are extremely blue with long, curved tail.

Sparrow, unlike a swallow, has a shorter tail and a smaller body. Colors that prevail on his body are brown and gray.

Although their tattoos do not mean love or affiliation to the navy, they still have some symbolism.

Their symbolism is especially emphasized in the Bible, that is, the New Testament when Jesus mentioned sparrows in the parable of the love of God. Speaking about how sparrows are considered less important, he explained how God sees every animal equally important to him. The same thing is with people.

Even the famous thriller writer, Stephen King, has not ignored the sparrows, and in his huge work “The Dark Half,” he refers to the sparrows as the bearers of dead souls in the afterlife.

Regardless of these great differences, both birds have the same meaning: they are symbols of the beauty of flying and everything that it brings, from freedom to going home.

These beautiful creatures embellish the world with their various melodies.

Do you know what the symbol behind the sparrow is?

Once upon a time, the notion of the lonely sparrow was a symbol of great solitude.

As the years passed, and man grew more and more across all continents, sparrows were recognized as symbols of new freedom.

You may not have known, but the position of this birds tattoos has a meaning. Two sparrows are the symbol of the end of a journey, but at the same time, they can be a sign of new love found.

A tattoo in the shape of two sparrows is a symbol of the sailor’s great knowledge and experience in navigation, and two sparrows on the wrist were a sign to other sailors that the tattoo carrier is a really lucky man.

The sparrow tattoo on the back of your arm is there to help you not get off the road and to remind you to stay true to your character.

Every prisoner who came out of prison would first get a tattoo of a sparrow as a sign of being a “prison bird.” More than one tattoo tells you that this person was often in jail.

As for these birds, tattoo designs can be divided into four categories: realistic, traditional, traditional with modern twist and abstract.

Realistic tattoos mean that a person had the intent to show the beauty of a bird and show how much faith and love matter to him/her.

Traditional tattoos with a modern twist look a bit animated and have a nice and somewhat unusual color. They look special and aren’t that common.

The abstract version is interesting because of the possibility offered by aquarelle technique that resembles the art of aquarelle in painting. This kind of tattoo looks gentle and soft on the skin.

A traditional tattoo is very difficult to make. Such a tattoo is also called the tattoo of Sailor Jerry, which is related to the fact that the sailors tattooed the body with this style during and after the Second World War.

There are three most common colors of these tattoos, and they are the most important ones. Blue is the most valued color of them all. The following are yellow and red.

The edges of traditional tattoos are made in a special way, thicker than the rest of the tattoo, to make the tattoo look better.

The eyes on the bird’s face were very often made just as two dotted lines and not as right realistic eyes.

To create such tattoos, it is necessary to visit an artist who has experience with them because you want the tattoo to look authentic but not false.

The symbolism of these small birds is numerous. Their most important feature is freedom, something that people appreciate and love. Birds have the option of free flying, moving and traveling around the world.

A tattoo can, therefore, be your symbol that says you are not a slave and that you are in the heart a traveler just like the birds. You can show how you appreciate your freedom.

Small and fast, these birds have a deep symbolic meaning and are associated with humility, freedom and true love.

Sparrow tattoos are less common. They usually have a religious connotation connected to them.

The swallow tattoos were also received by highly experienced sailors, who have passed more than 5,000 nautical miles, which was their first tattoo, the other after another 5000, followed by the tattoo of the stars for even more miles.

Every tattoo you place on your body does not have to be of particular importance, but it would be good if it had some meaning.

The specialty of the colors that can be used in this tattoo is fantastic. The shades traditional red, blue and white make this tattoo exceptional.

This tattoo can fit into any part of the body, even on the abdomen.

If you tattoo a swallow, do it on the forearms because the long tail of this bird fits great to this narrow part of the body and gives the tail enough room.

This tiny tattoo is a good choice for people who value subtlety and style.

Made mostly in black-and-white technology, it is ideally suited to the area of ​​the woman’s neck and chest to emphasize it’s delicacy.

A tattoo of the swallow with ornaments

This beautifully-exported tattoo is made in a very elegant shape that shows a swallow as a bird,  with a multitude of detailed ornaments and a delightful design.

Wings full of decorative details are a special addition.

This tattoo is a true work of art and must be fully appreciated.

This tattoo contains not one but two birds and thus became a symbol of lasting love and permanence.

Tattooing this work of art can be a great inspiration for the tattoo bearer, for your partner and for people around you, who see the strength of your relationship and how much you value loyalty.

This tattoo can also be a reminder of dear friends or even loved ones you’ve lost.

Shaded tattoo of swallows behind the ear

This type of tattoo looks somewhat photographic because it is made in several shades.

Except behind the ear, this tattoo is beautiful on both the joints and the chest.

Orange is an extremely lively and attractive color that leaves no one indifferent to it. It is warm and gives smoothness.

The point of this tattoo is to attract attention and to create an impression on other people.

A special effect is highlighted in contrast to the bright orange and extremely black colors that give this tattoo a dramatic look.

This tattoo must be done by a tattoo expert because the colors are very demanding to make and it has to be done perfectly.

Miniature tattoo of  many swallow flying

This tattoo is most commonly placed on the joints, chests, and neck. They present a few tiny swans swirling in black without much detail.

Although this tattoo is small, it is effective and has a lot of styles.

It gives a touch of secrecy about the bearer’s character.

The black tattoo of swallows with ornaments

This tattoo is often made in the form of a sleeve, though it doesn’t have to.

It has a brilliant conceptual effect and is beautiful because of its many fine details and beautifully shaded edges that make the impression that the bird is in real motion.

This tattoos often include clouds and nests and similar motifs associated with these birds.

This tattoo represents the special timeless beauty and has only one word that can describe it: wonderful.

In addition to the coral blue that makes it appealing to women and is often a tattoo choice, there is also a beautiful floral pattern in the background, and it is particularly beautiful when the bird is found next to a charming branch with flowers.

This tattoo has meaning concerning the longevity of life and beauty that accompanies it.

Shadow of swallows in flight

This tattoo is simple and complicated at the same time. It is a tattoo that shows the shaded body of a swallow, but inside the body, there are huge flowers (mostly roses), which can be an interesting and appealing detail for women.

Sparrow on the fly

This tattoo is surprisingly effective and beautiful due to its size, and this may be thanks to the tattoo of a flying sparrow who looks very realistic.

Particularly beautifully crafted wings are becoming brighter at the edges.

It is particularly effective when it is tattooed on the arm.

Sparrow as a silhouette

Although the sparrow is often mentioned in a less attractive context than a swallow, this tattoo proves the opposite.

Regardless of size, the sparrow looks majestic, especially because of the reddish brown shaded background that puts it in the front and looks almost three-dimensional.

Common tattoo sites are forearms, neck or chest, and size is not so important, though smaller specimens are usually more beautiful.

All bird tattoos have something in common: they make the person feel freer and to feel more loyal to home at the same time. This double meaning is a little awkward because it represents the bearers wish to travel and be free and his happiness to return home, to a known place.