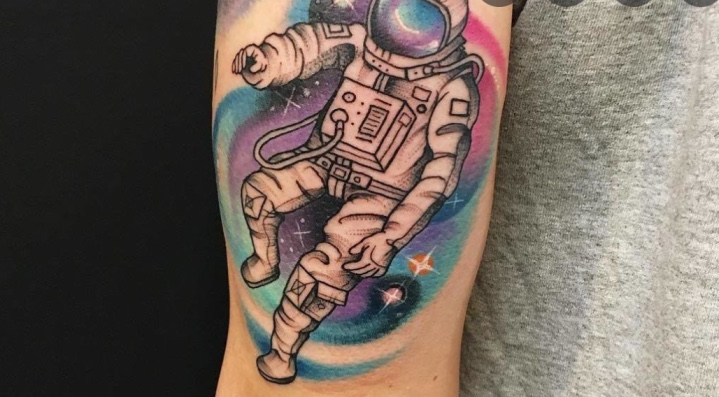 Space has always been a source of fascination for humans, and what could be more exciting than being an astronaut – someone who gets to explore it? While a few people actually make their childhood dream come true by becoming an astronaut, many choose to get it tattooed. But what is the astronaut tattoo meaning?

Some consider it a symbol of patriotism, while others associate this tattoo with achievements. Whether you’re looking for a tattoo that represents your dreams of becoming an astronaut or you simply want a cool design, an astronaut tattoo is a great choice.

Plus, there are many different designs to choose from, so you’re sure to find one that fits your personality perfectly.

Here’s everything you need to know about the meaning and symbolism behind this popular tattoo.

Astronauts are symbols of the space race and the exploration of outer space. The word “astronaut” comes from ancient Greek, and it means a sailor of the universe. So it only makes sense that people who have been to space would want an astronaut tattoo.

This could be something as simple as a tattoo of themselves in their spacesuit or a unique design related to their training or the process of getting to space.

In addition to actual astronauts, you might also see NASA tattoos on people. Regardless of the design, an astronaut tattoo is a symbol of someone who has ventured into the unknown and come back with tales of their experience.

It could also be a way of paying tribute to those who have dedicated their lives to exploring space. For some people, getting an astronaut tattoo is simply a way of showing their support for the space program.

Astronauts are a symbol of human achievement and exploration. However, knowing astronaut tattoo meaning is as important as the tattoo itself. These tattoos can have a variety of different meanings, depending on the wearer’s connection to the concept of space.

For some, it may be a reminder to pursue their dreams. For others, it may symbolize patriotism and a love of adventure. Whatever the meaning, an astronaut tattoo is sure to be an eye-catching design.

Let’s take a closer look at the deeper meaning of astronaut tattoos.

Astronaut tattoos are more popular among those who are fascinated by space than stars, planets, and galaxies. Whether you choose a small astronaut tattoo or one that is part of a larger design, you can represent your love for astronauts in any way you like.

Anyhow, the tattoo conveys a love of space to the wearer.

Patriotism can also be symbolized by an astronaut tattoo. American astronaut Alan Shepard was the first to go into space as part of the Mercury program. Afterward, Neil Armstrong and Edwin “Buzz” Aldrin became the first men to walk on the moon.

Aiming For The Stars

To encourage people to pursue their dreams, the phrase “shoot for the stars” is often used. Astronaut tattoos can serve as a reminder that no dream is too big or impossible. You can keep this tattoo on your body as a daily reminder to keep reaching for the stars if you have your heart set on becoming an astronaut.

A Sense Of Adventure

Astronaut tattoos may appeal to people who enjoy thrills. It’s no secret that astronauts are adventurous. To explore new territory, they are constantly pushing the boundaries of what’s possible. It’s the perfect way to show how much you love adventures if you have an astronaut tattoo.

Science fiction is a passion for many people, so astronaut tattoos are simply a way to express it. A movie, TV show, or book featuring astronauts as the main character might inspire them. Whatever the case may be, these tattoos demonstrate the wearer’s interest in space.

A Reminder Of A Loved One

A loved one who was an astronaut or aspired to be one may inspire some people to get an astronaut tattoo. In addition to serving as a reminder that you are always with them, this tattoo can keep them close to your heart.

A Symbol Of Exploration

A Connection To The Cosmos

There is a strong belief that humans and the cosmos are connected. In addition to symbolizing this belief, an astronaut tattoo can serve as a reminder of our connection to the universe.

Overall, an astronaut tattoo is a design that is very cool and unique. It can also quite difficult to remove due to the often complex design, so if you choose this tattoo, be sure that you are committed to it.

If you are thinking about getting an astronaut tattoo, then we have got you covered. Below, we have compiled a list of some of the most popular astronaut tattoo ideas and their meanings.

This tattoo design is a popular type of astronaut tattoo. It usually features an astronaut helmet with stars or other space-related elements. The meaning of this tattoo varies depending on the individual, but it often symbolizes exploration, courage, and ambition.

This design is a more creative take on the astronaut helmet tattoo. It features an astronaut floating in space, often surrounded by stars or other space-related elements.

This astronaut tattoo can represent many things, such as freedom, dreams, and limitless potential.

This tattoo is a unique design that combines two seemingly disparate elements: an astronaut and a diver. The meaning of this tattoo can vary depending on the individual, but it often symbolizes the courage to explore new frontiers and push boundaries.

Astronauts are a popular subject for watercolor tattoos. They are often seen as a symbol of hope, exploration, and adventure.

An astronaut tattoo with the universe in the background can be a reminder of how small we are in comparison to the vastness of space. It is said that people are just a speck of sand compared to the universe.

This tattoo might help someone remember that their problems are not as big as they seem. It can be a reminder that we are all just a tiny part of something much bigger.

Something is intriguing about black and white tattoos. They have a classic look that never goes out of style. What’s more, the contrast and aging make them last longer – especially if you’re into realism or surrealism.

In these cases, you need those sharp edges to keep the tattoo together. Black and white astronaut tattoos fit this bill. They look amazing and are sure to turn heads.

Astronaut On The Moon Tattoo

There you have it. Whatever the astronaut tattoo meaning is for you, we hope that you found some inspiration from our list of Astronaut Tattoo designs and ideas.

Overall, astronaut tattoos are a popular choice for those who want to show their love of space and adventure. They can represent many things, such as exploration, courage, and ambition.

There are many different designs to choose from, so you can find one that perfectly suits your personality. Whether you want a simple design or something more intricate, there is an astronaut tattoo out there for you.