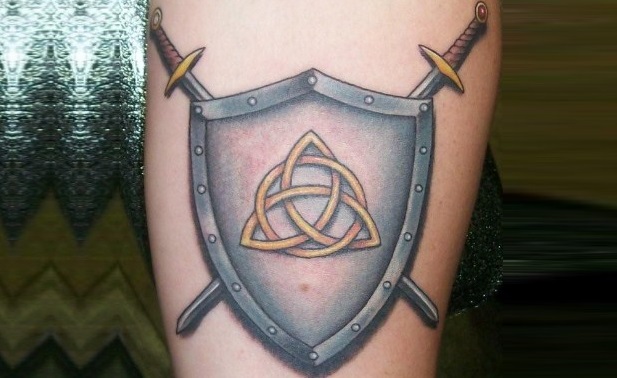 The symbol drawing is closely related to the symbolism of the shield as the main bearer of the princely or knightly coat of arms. Therefore, the shield gained the broadest significance in the whole knightly culture and especially in the heraldry.

Even the large square frame shields, as the oldest Germanic shields were painted with bright colors and decorated as with the Greeks with bizarre figures. Thus the use of personal coats of arms originated. Several remains of such shields can be found under the shields of the Iron Age, as well as in the Franconian round shields.

Probably there were already tribal colors in which the shields were painted; At least Tacitus (Germ 6.) mentions that although the Germanic peoples do not wear outward splendor, they draw the shields with the most chosen colors. Of the tribe of the Harier, he expressly mentions (Germ. 43) that these were recognizable by their black shields.

The Old Frisian laws of the Migration Period speak of brown shields as their own and of red Saxon. The Franconian shields are described by Apollinarius in the 5th century as golden yellow in the middle and painted white towards the edge. In the north, the red shield was a sign of war, the white one a sign of peace.

Also in the 6th century we find evidence that the shields were a popular object of decoration by goldsmithing. Gregory of Tours (6th c.) Mentions a gold-studded and stone-covered shield, which Brunhaut sends to the King of Spain.

Also in the Middle Ages, wooden shields were covered with parchment or canvas and painted with vivacious colors.

In the 11th century we meet Harald III. from Norway on traces of a painting of the shields with adventurous and deterrent figures. However, such colorful, purely ornamental aligned shield painting must not be confused with the later heraldry.

During the 13th century The sign painting developed into a specialized sign painting and heraldry, with the purely ornamental gradually becoming heraldic and symbolic. Together with painted shields were doing well brightly painted pot helmets against the spread of the crests and helmet covers to those things which were the beginning of heraldry.

That not only the front of the shields was painted, show u.a. the preserved remains on the back of the blazon of the landgrave Konrad of Thuringia († 1240). This was originally covered with parchment and completely gilded. On this gold background was painted in strong outlines in glaze colors painted a cycle of several figures. In the course of time, however, this painting of the reverse side was almost completely ruined, as the gilding and painting fell away from the chalk foundation.

Heraldry is the doctrine of the crests and their proper use. The word “heraldry” for “heraldry” has only existed for about three hundred years. It derives from the term “herald.

Over time, a three-level hierarchy developed: the king of the heralds (“Heraldic King”) stood over the heralds and this again on the Perseverant (by French poursuivant, candidate). Later, the heralds also took over the organization of the tournaments. They checked the equality of the participants (by the so-called “helmet test”, the assessment of the helmet, the necessary number of noble ancestors was determined) and made the draw of each opponent.

The heralds had the task during the countless feuds and battles of the middle Ages to distinguish friend and foe by coat of arms and flag, to watch the course of armed conflicts and to witness the outcome of a battle together with the heralds of the other side. The winner was usually the one Party that had the fewer number of fallen ones. The heralds were able to cross the battle lines for this purpose as invulnerable messengers and parliamentarians.

As an unmistakable feature of their nonpartisan function they wore a widely visible tabard, the “Tappert”, over their ringmail. They were unarmed and always stayed in the immediate vicinity of their prince or army commander. Should an order of the general be made known, the herald put on the Tappert and read the text after three horn signals of his trumpeter.

The Herald was also sent to the opponent to offer combat, surrender, surrender, ceasefire, or duels between individuals. The activity of the herald required good language skills, an infallible memory and great discretion, since he was not allowed to communicate his perceptions in the opposing camp to his own master. The heralds also had important functions as witnesses to the knighthood and identification in the battle of fallen knights. Some heralds kept accurate indexes of the blazon – until today important sources for the development of the coat of arms system. In states with strong ties to tradition – such as the UK – the heraldry still exists today. In most countries, however, it was lost by the 19th century at the latest; his functions as trustee of the coat of arms and representatives of heraldry have been transferred to protocol and archive officials, to private associations and scientific societies.

The coat of arms itself has developed under Arab influence from the weapons technology of the knight’s armies. During the Crusades, the European armies encountered such fierce resistance that they needed to reinforce their protective armament. With the introduction of a knight’s helmet with a visor, the warriors became unrecognizable and had to identify themselves with easily identifiable signs: through painted shields, decorated helmets and horse blankets as well as rider flags. Simple coloring and shield division made these marks widely visible and recognizable. Another element of the gradually emerging heraldry was the labeling by nations. Before the Third Crusade, crusaders of the same language joined together under a similar cross. Viking shields and Celtic shields are popular symbols and are especially beloved as tattoo symbols for their colorful scheme and forms.

Finally, the coat of arms was promoted by the medieval feudal order. Between feudal lord and servant a legal relationship based on mutual loyalty and support was justified, which existed above all in the transfer of rights of use to land. In return, the fief had to pay in kind and war services. Over time, the inheritance of the fief was enforced, which also hereditary coat of arms. It has survived in many forms up to the present time: as state, state, community and family crests, as the coat of arms of church dignitaries, as religious, university and club crests.

Characteristic of heraldry is her artistic and complex terminology, not only in German, but also in other European languages. Similar to the sailor language, many things in heraldry have their very special names. For the individual parts of the coat of arms and for the shapes of his pictures many traditional terms are used.

Thinking about tattooing? It’s not very smart to go straight to the tattoo salon by random selection pick a tattoo and get out of the salon with your new masterpiece. Stand for a moment and consider these 5 important things before tattooing.

Tattoo is a lifelong decision, so you must be absolutely 100% sure you want to make it. You may now think that you all understand that your world viewers will not change, but will you think about it for 10, 20 or even 50 years? Of course, today there are tattoo removal techniques that are a lot of improvement, but it’s still very expensive and painful. So it is best to assume that the tattoo is lifelike because no one tattooed to later remove that tattoo.

You have decided that you definitely want to tattoo. The next step is to choose a tattoo. There are hundreds of categories you can choose, and on the millions of tattoos that you might like, the choice is endless. Most tattoos are made from existing tattoos. The thing is a personal choice. You can choose something that you like or you can draw something. We definitely advise you to visit a variety of websites, study various books, and consider the choice.

If you are not happy with what you find, you can always tell the person who will tattoo you to improvise with some of your sketch or some idea, so you may get the results you want. Probably your tattoo will be more expensive, but remember, a good tattoo is not cheap. This option is great because it will have you a tattoo that you like and it will also be unique. It is also important to choose a tattoo that will mean something to you in the future. Especially if you tattoo names. Many people tattoo their children’s names. This is a safe option, as it will always be your children. But think carefully before putting the spouse’s name on your body. What will happen if you break in the future? Will a new partner be happy with your body decoration?

Black or white tattoo is a choice that is closely related to your choice of tattoos is whether it will only be black or will it be in color? This depends largely on the choice of the tattoo itself, about how you like it more. Black tattoos have more definitions and may be more noticeable on the skin itself, while on the other hand color tattoos are much richer and can express more signs. They should be the same.

Before you decide which part of the body you will cover with a tattoo, ask these questions:

Tattoo size? If you want a big tattoo, you probably will not have enough space on your hands or feet. Back, shoulders, chest or belly are better positions for big tattoos.

How much do you want the tattoo to be visible? Do you want your tattoo to be visible most of the time or more you want a discrete, hidden tattoo. Think about your dress style, how it will look tattooed, and whether it will bother you. Also consider the work you are dealing with. Some professions allow tattoos, while some do not. It all depends on the business you are dealing with.

Tattoos of some parts of the body are more painful than some others. The areas of your body that could hurt you all are where the skin is thinner and where you are bonier that’s the joints, the head. A lot of back also knows more hurt. Less painful areas include shoulders, breasts and chest, upper arm. Given the number of nerve endings involved, intimate areas can be extremely sensitive and painful.

The size of the tattoos as we have said before is largely determined by part of your body that appears on it. Big tattoos require more time to make and of course they are more expensive. Tattooing your body is a great decision, so do not rush. Consider these things above and then just move on to the part.