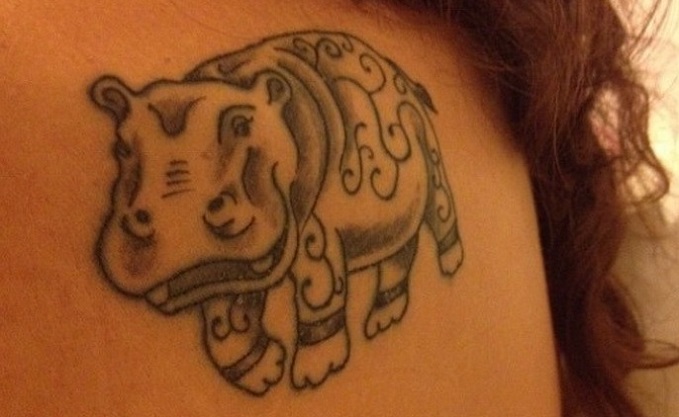 People have always loved animal tattoos. They decorated their bodies with tattoos that represented different animals and each of these tattoos had its own meaning. People were identifying themselves with animals that they had on their tattoos.

Today animal tattoos are also very popular and they have strong meanings.

In order to understand a certain animal tattoo, it is important to know the meaning of an animal that is represented on this tattoo. Some of the most popular animal tattoos have always been lion tattoos, tiger tattoos, snake tattoos and many others. But, you may not have known the meaning of hippo tattoos.

First of all we have to say that hippo or hippopotamus is a large mammal that comes from Africa. This animal is recognisable by its wide mouth and large body. A hippo has short legs and it has about 1300 kg, but it can run fast in short distances. This animal usually lives in lakes and rivers, but it can also survive out of water. These animals are very agressive and they can be unpredictable. That’s why they are considered one of the most dangerous animals on the planet.

In this article you will have the opportunity to read about hippo tattoos and their symbolism. These tattoos have been popular throughout the history, but they are also becoming more and more popular nowadays. If you would like to find out something about hippo tattoos, then you should read carefully this article. We will tell you what these tattoos mean and what they can symbolize.

Also, you will see some of the most popular designs related to hippo tattoos. We are sure that you will find some interesting ideas for your own tattoo.

It is known that a hippo female is ready to do anything to protect her youngs. That’s why we can say that one of the most common meanings of hippo tattoos is protection of family and loved ones. These animals are very devoted to their families. A hippo is usually considered as a symbol of Childbirth and Motherhood.

In African folklor there were many stories and legends about this amazing animal. It is interesting that in Africa a hippo is appreciated even more than a lion. A hippo is usually represented as a symbol of bravery and strength. Also, it is considered that a hippo has a strong connection with medicine and healing, because this animal spends the most of her life in water.

We can say that hippos are symbols of motherhood, protection and fertility. Also, we have said that they are appreciated for their bravery and they have healing powers as well. Sometimes these animals are considered to be a symbol of obesity.

Even though the meaning of hippo tattoos is usually positive, we can also say that sometimes these animals are connected with darkness. It is known that ancient Greeks and Romans brought hippos from Africa to participate in different gladiator games.

The history also says that Pablo Escobar, a famous Columbian drug dealer, had his own private collection of these animals. It is believed that hippos were killing the enemies of Pablo Escobar. That’s why hippos had also negative reputation in history, especially in the Western culture.

However, we can say that in the recent times, a hippo has become a popular character in cartoons and also a part of pop culture. There are also many interesting games for children where hippos are playing main roles.

Now when you know possible meanings of hippo tattoos, we will tell you something about their designs. Also, we will give you a couple of interesting ideas that could help you choose a hippo tattoo for your own body.

Even though hippo tattoos may look very powerful, there are not too many people who would like to wear these tattoos. We have already mentioned a negative reputation of these animals.

On the other side, there are also people who are fascinated by hippo tattoos and their symbolism.

Another option is to have a tattoo that will represent the natural look of this animal. In this case it is very important to find a tattoo artist who will make your tattoo look realistic.

Also, there are many other designs of hippo tattoos. If you would like to have a tattoo without any details, you can choose a tattoo done in black and white color. It can represent only a head of a hippo or the whole body of this animal. It depends on what you want to represent with your hippo tattoo.

Another interesting design for a hippo tattoo is a hippo with opened mouth where you can see clearly its teeth and its ferocious nature. If you would like to express the aggressive part of your own personality, then this tattoo may be the right one.

Before you decide to have a hippo tattoo, it is important to choose where you will place this tattoo. Most people wear a hippo tattoo on their arm or chest, but you can also have it on your belly. If you want a big hippo tattoo that will attract a special attention, you can do it on your back.

Also, it is important to decide whether you would like to have a figure of a hippo only or a hippo combined with some other elements. Of course, most important is that a design fits your own personality. If you have a hippo tattoo, you can be sure that many people will probably talk about your tattoo. But, most important is not to pay attention to what other people talk, but to know what this tattoo means for you.