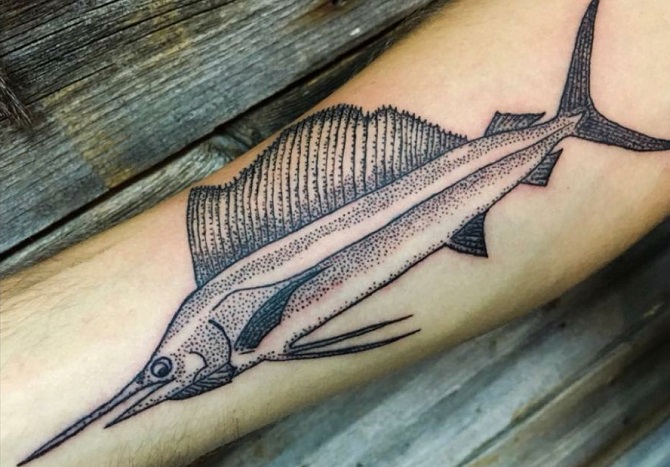 Tattoos of fish and other sea creatures are very popular all over the world. In this article we will talk about the blue marlin tattoo, which could be a great choice if you want to decorate your body. In order to understand the meaning of this tattoo, we have to tell you something about the blue marlin fish and its characteristics. If you love hunting in a deep sea, then you have certainly heard of this type of a fish.

This fish has a fearsome look and a terrible temperament, so it is very hard for fishermen to catch it. A blue marlin fish usually lives in the parts of the world with a tropical climate and it is a very popular game and sporting fish. This fish contains a lot of fat in its body, so it usually has a great value in markets.

Not only sharks are the symbols of strength and power in the sea, but also a blue marlin fish. This fish has a lot of other characteristics, so many people have decided to have this fish as their tattoo. A tattoo of a blue marlin fish is very meaningful and now you will have the opportunity to find out what this tattoo means and why its symbolism is considered to be so powerful.

It is also important to say that many writers have written about this fish.

If you would like to have a tattoo, then you should read this article. It could give you great ideas for your tattoo. If you didn’t know what a blue marlin tattoo may represent, in this article you will have the opportunity to find it out.

There are many different meanings when it comes to the symbolism of blue marlin tattoos. As we have already said, this fish is rare and it is also one of the fastest fish in the sea, so if you manage to catch it, you must be very proud of yourself. Because of that a blue marlin tattoo is usually considered to be a symbol of your honor and pride. You may be proud of yourself because you have conquered your great enemy. If you had in your life an experience like that, then a tattoo of a blue marlin could be a great choice for you.

Also, it is important to say that a blue marlin tattoo is a symbol of strength and power, which means that you may be able to overcome many difficult struggles and get out of a difficult situation in your life.

Now when you know the meaning of this amazing tattoo, we will tell you something about its designs. We will give you a couple of interesting ideas related to this tattoo, so we hope that you will find something that you like.

You may have heard that fish symbolism is usually related to the psychic aspects of someone’s personality and it is also associated with the intuition. If you decide to have a blue marlin tattoo, it could tell a lot about your own nature and abilities.

A blue marline tattoo is not a very common tattoo, so if you choose to have it, you can be sure that it will have a special symbolism and it will attract a lot of attention. One of the most popular designs for this tattoo is a blue marlin fish that is jumping out of the water. This tattoo will symbolize strength, power and beauty of this fish.

Another interesting tattoo is a blue marlin fish that is silhouetted against the sun. If you don’t like tattoos with too many details, then we can recommend you this tattoo. A detail on your tattoo that will attract a lot of attention is certainly the elongated jaw of this fish. A blue marlin tattoo is recognizable for its jaw, so you have to choose a good tattoo artist who will be able to make it look real. A popular design for your tattoo could be also a tattoo of two blue marlins that have a duel with each other.

Of course, your tattoo of a blue marlin fish could be done in black color, but it could also be very colorful. It all depends on how creative and imaginative you are. Of course, the most common color on this tattoo is blue.

Also, there are many symbols that you can add to your tattoo to make it even more attractive and unique.

However, it is best to ask your tattoo artist for an advice. You should have in mind that each symbol on your body should have a specific meaning.

It is also important to choose the place on your body where you want to have this tattoo. This tattoo will look great on your shoulder and your arm. If you love tattoos with too many details and in different colors, you can have a blue marlin tattoo all along your back.

Not only can you have a blue marlin fish on your tattoo, but also a deep sea in the background. Its beautiful blue color will make your tattoo even more realistic and powerful.

These are some of the most common designs for a blue marlin tattoo, so we hope that you like some of them. We hope that you have found interesting ideas in this article, so you can imagine what type of a tattoo you want to have for yourself.

As you have seen in this article, a blue marlin is not only a creature that lives in the sea, but it has also a very strong symbolism. Many fishermen opt to have this type of a tattoo, but it can be very powerful for other people as well. Of course, this tattoo is typical for men, while women usually don’t choose this type of a tattoo.

However, a blue marlin tattoo is unique and timeless, so we hope that it will have a special symbolism for you.