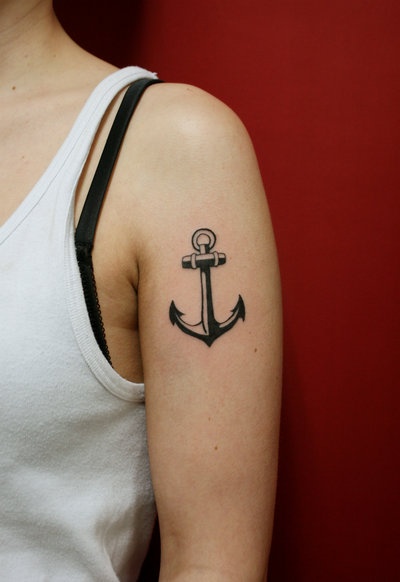 Choosing a tattoo can be simple or hard. For some, it’s all about the beauty of the image; for others, there should be meaning behind the tattoo.

If you’ve ever wondered about the anchor tattoo meaning and symbolism, this ultimate guide will share with you all you need to know.

Traditionally, anchor tattoos were reserved for sailors. It was used as a way to reference the brotherhood between these men, as well as a way to identify each other. Some sailors also believed it would keep them safe if they happened to fall overboard.

In the 19th century, almost all US Navy had maritime tattoos as a symbol of good luck. They also got an anchor tattooed on them to remind themselves of crossing the Atlantic Ocean. An anchor tattoo was a right of passage.

Outside of service, anchor tattoos have various meanings that make getting such a tattoo worthwhile. At its core, it represents keeping you grounded. Just as sailors at sea, people who get an anchor tattoo believe that it would keep them safe during the metaphorical storms of life.

Whether you consider getting your tattoo done in a traditional, old-school manner, or opt for a more up-to-date version of one of the most time-honored and symbolic images, you can’t go wrong. There are also many professional tattoo artists who love melding traditional and contemporary ideas to come up with a unique design that pays homage to neo-traditional style tattoo artists, as well as more modern masters.

The meaning of anchor tattoos has evolved to include:

There can also be a religious meaning behind getting an anchor tattoo as it represents being strong in your faith. In fact, many tombs in the Roman catacombs have an anchor symbol on them. If we go back in history, early Christians wore an anchor instead of a cross to prevent persecution.

There’s no limit to the possible designs you can do that include an anchor. You can keep it simple or add other imagery to expand on the symbolism behind the tattoo for you.

An anchor paired with a rose is a popular choice among female victims of violence as it represents strength and perseverance. The rose not only gives it a feminine touch but alludes to the softness of being a woman. This is a great contrast with the hard edges of the anchor.

When you combine a heart with an anchor, your tattoo may symbolize that your loved one keeps you stable during rocky times—or can represent the stability of your relationship and love in general. People often add the name of their loved ones somewhere in the tattoo design. Couples like anchor tattoos (with or without a heart) to show the world that they’re dedicated to each other for life—no matter the storms they may face.

An anchor surrounded by rope is probably the most well-known anchor tattoos as it is used by members of the Navy to signify a brotherhood and represent their strength as an individual and as a group.

Of course, there’s nothing stopping you from having a tattoo of an anchor and rope if you weren’t part of the Navy! It’s possible to find other meanings in the same image. For example, if you love the sea and going sailing, you may want a rope and anchor tattoo to celebrate this love.

The thing is, tattoos are art, and just like any art form, you can take liberties and create meaning or change meaning where you see fit. So, whether you design your own anchor tattoo or choose a pre-selected image, it still means something to you.

On which part of your body you decide to get it, the anchor tattoo meaning and symbolism can change.

Sailors usually get their anchor tattoos on their upper arms. You definitely have seen an anchor with the word “mom” or another name through it. Those are one of the most popular anchor tattoos you’ll see on the upper arm.

Anchor tattoos are often done on feet to remind you to stay grounded as you go through life.

If you decide to get an anchor tattoo on your neck, it can represent that you’re away from your loved ones for long periods at a time. The anchor tattoo in your neck is a constant reminder of who is waiting for you back at home.

Of course, there aren’t any hard and fast rules when it comes to getting a tattoo and you can adapt the anchor tattoo meaning and symbolism to your own personal story or beliefs—and place it wherever you like.

It’s easy to see why anchor tattoos are so common—there is a lot of power in this image as it signifies strength, perseverance, grounding, family, and many other special connotations. What’s more, there may be many meanings we don’t even know about since getting a tattoo is such a personal choice that can mean one thing to one person, and something totally unique and different to another.

Anchor tattoo meanings and symbolism can also be religious or spiritual. It can serve as a reminder of Christian persecution or help ground you in the world which will remind you that you have a purpose.

Whatever your reason for getting an anchor tattoo may be, be sure to go to a professional tattoo artist who is willing to work with you on a design that incorporates all the elements you want it to. Tattoos are permanent and a tattoo as special as an anchor tattoo should be properly done so that you’ll be proud to share it with the world.