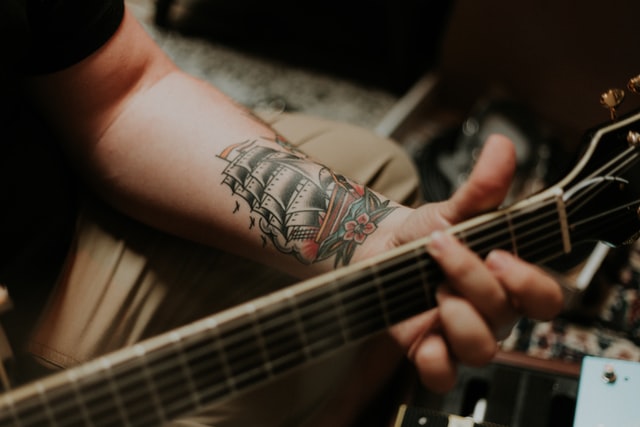 There’s something about ship tattoos that just seems to capture our hearts. Maybe it’s the symbolism of adventure and travel or maybe it’s the beauty of these vessels that have been a part of human history for centuries. No matter what the reason, ship tattoos are definitely popular among tattoo enthusiasts.

If you’re thinking about getting a ship tattoo, there are a few things you should know. First of all, different ships have different meanings and symbolism. For example, a pirate ship might represent adventure and freedom, while a luxury cruise liner might represent luxury and wealth.

There are literally thousands of different ship tattoo meanings and designs to choose from, so you’re sure to find one that suits your personality and style.

First, let’s look at the most common meanings associated with ship tattoos.

The number one thing that comes to mind when we think of a ship tattoo is adventure. These ships have been traveling the world’s oceans for centuries and the prospect of discovery and exploration is a romantic ideal.

Ships have been an important part of human travel for centuries. They’ve allowed us to explore new lands, discover new cultures, and expand our horizons. A ship tattoo can represent your own personal journey through life.

Being on the sea, a ship can represent freedom. There’s something about the waves lapping against the sides of these ships that just makes us think of being free. Whether you’re trying to escape your current situation or simply dreaming of setting sail for new lands, a ship tattoo can be a reminder to always seek out adventure.

A ship needs to be strong to withstand the harsh ocean conditions. It takes a brave and courageous person to set out on a sea voyage, and this is what a ship tattoo can represent – strength in the face of adversity.

Ships have been an important part of human transportation for centuries, but that doesn’t mean it’s been an easy journey. Sailors have faced many hardships over the years, from storms to pirates to diseases. A ship in a storm tattoo can represent the struggles that you’ve faced in life and the strength you’ve needed to overcome them.

A ship is only as good as its crew. Sailors have to rely on each other for their safety and well-being, and this is what a ship tattoo can represent – loyalty and brotherhood.

Ships have been around for centuries and they’ve played a role in many of the world’s most important historical events. If you have a proud maritime heritage, a ship tattoo is a great way to show it off.

A ship tattoo can also be a representation of patriotism. The United States Navy has a long and proud history, and sailor tattoos are popular among service members.

Now that we’ve looked at the most common meanings associated with ship tattoos, let’s take a look at some of the different designs you can choose from.

There are literally thousands of different ship tattoo designs to choose from, but here are a few of our favorites.

This design is great if you’re looking for tattoo ideas that represent luxury and wealth. In addition to being expensive, these ships have been very well maintained over the years and feature some of the most beautiful designs possible.

If you think about it, a warship really does resemble a floating castle from a bygone era where great heroes would launch epic quests across vast seas. A battleship represents strength and bravery in the face of adversity.

A submarine looks like a boat on top, but it’s hidden away below the surface. It goes without saying that this tattoo design represents discretion and privacy – not to mention adventure.

Ships have been used to transport goods from port to port for centuries, and container ships are responsible for moving a large percentage of cargo all over the world today. This is a great choice if you’re tired of the traditional ship tattoo designs and want something unique and modern instead.

The sail ship tattoo’s meaning is all about simplicity and relaxation, so it’s the perfect choice if you just want a small design that represents these ideas. These tattoos are usually very colorful to increase visibility. This design would also make for a wonderful small ship tattoo.

You can also try a clipper ship tattoo – these are very exciting, or even a viking ship tattoo.

Are you ready for your next tattoo?

Ship tattoos are one of the oldest types of designs in human history, so you can’t go wrong with this timeless classic. Just make sure you choose the right design and meaning that fits your personality – as well as the right artist.