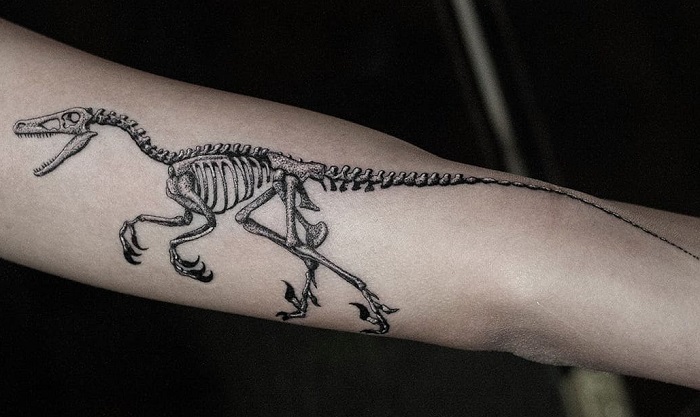 Most people love dinosaurs and when they think about them, they first see their magnificence and their enormous size. You cannot tell us that they do not remind you of the movie “Jurassic Park”.

This huge movie hit made a lot of people interested in the past of these creatures, they simply became dinosaur fans. Although frightening, you couldn’t move your eyes from the screen. Also, the word “awe” comes to your mind when you think of such an abstract thing.

The word dinosaur comes from the Greek word “deinos”, which means fearfully great and “sauros” which means the lizard. They are not lizards really, but the Greeks saw them that way. The name became pretty known and that’s the reason it never got changed after the biological realisation.

It is still not decided how did the dinosaurs go extinct, but a lot of scientists believe it had to do something with a fall of a meteor. Each tribe and nation has their own belief, some of them related to the science, some of them being more of a religious explanation.

The dinosaur tattoo isn’t one of the extremely popular kinds of tattoo but is mostly liked by both genres. The majority of women have more feminine dinosaurs tattoos, but men prefer them to look more vicious and their tattoos are much bigger. Men want them to look menace so they choose more dangerous types of dinosaurs.

Dinosaur tattoos are wrongly considered not to have any meaning at all. Although we cannot really relate to them and didn’t have any true connection with those creatures, getting a dinosaur tattoo is a great way to show the strength and power of these inspiring animals. It is normal to think of them as majestic because they were in their time.

Dinosaur tattoos have fans amongst a particular kind of people. People who love archeology like these kinds of tattoos, especially footprint tattoos and skeletons. Some archeologists study dinosaurs all their lives and make a tattoo to give it a meaning and show their appreciation for this stunning animals.

A lot of people who like Jurassic Park franchise also love dino tattoos. They get them in order to mark their interest and sometimes they even go further and tattoo the actors along.

The most often answer of people who chose dinosaur tattoos is that they admire their strength and that is the reason they chose them. Dinosaurs are symbols of strength and tattooing them sends the same message. They didn’t make it through time in history, but they were the most dangerous animals during the time.

They can also symbolize power, which is different from strength. Dinosaur  power represents the emotional strength of the person wearing the tattoo. Wearing a dino tattoo often says that its owner is very proud and has an inner power to fight against any obstacle in life. Power and strength are very good symbols to wear, aren’t they?

If you love dino tattoos and don’t find any special meaning in it, that is also okay. There are individuals who just like to see the tattoo on their body, and don’t try to find what it symbolizes. 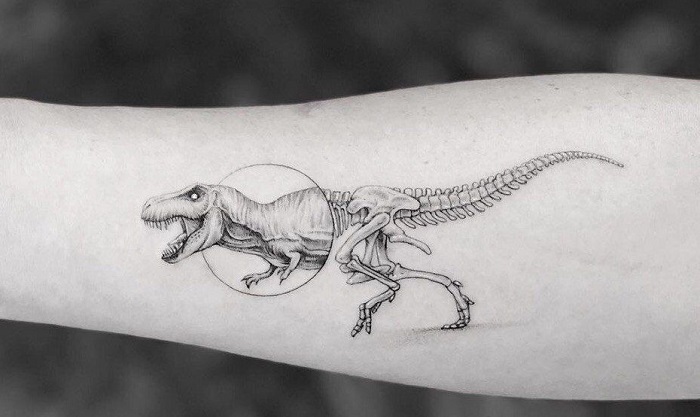 But, it wouldn’t be unusual that your subconscious found a meaning in some dinosaur tattoo and you actually have a connection to your tattoo. Everyone is different.

If you were always interested in dinosaurs and have thought about them with respect, then you will always like to see it on your body, and with years it will get even more meaningful for you.

A lot of people choose dinosaur tattoos because they remind them on their childhood, when they admired dinosaurs, dragons and other fantastic creatures.

These are the most impressive ones:

This is one of the most common tattoos of dinosaurs because Tyrannosaurus rex is also called the King of the Dinosaurs and is considered to be the most majestic of them all. They used to be the predators amongst dinosaurs and even other species feared them.

The scenes that are popular are mostly those with their jaw wide open and their sharp teeth showing. This defines the T-Rex’s true nature and the form that they usually have.

People who tend to get a T-Rex tattoo want to show their strength and power and sometimes even make them to warn people about their impulsive nature and character. You don’t have to be this way to have a T-Rex tattoo, though, this is just an inner drive that some people have.

T-Rex is a very recognizable dinosaur and a lot of its popularity can be linked to the famous movie “Jurassic Park”. T-Rex was a symbol placed on the posters and the films covers so it became recognized amongst children and grownups. That’s how most people found out about the looks and the character of this creature.

This tattoo is connected to a beautiful classic movie “The Land Before Time“, which was released in 1988, by Disney Pictures. The cartoon was so popular that a lot of people made their tattoos back then, and they are still wanted today. Those who have been marked by the movie and those who find it a cute memory get it up to this day.

They are very colorful and vivid so they are best suited on people who know how to wear this kind of tattoo. It must be the centerpiece of the body, in order to get the attention it deserves. It is usually on a part of the body that can be easily visible by wearing shorter pants or short-sleeved shirts.

This tattoo is very well liked by women who think that the little fellas are cute and warm. It is a good choice if you want to show your non-aggressive nature and your cuteness.

Sometimes the baby dinosaur tattoo is made alongside mama dinosaur tattoo to show the motherly nature of the bearer. For some women it is related to their kids and some people just put it because they work with other people, perhaps children.

Baby dinosaur tattoo is also cool to put on the neck, ankle and wrist because being tiny is one of the things it makes it so cute.

The dinosaur footprint tattoo is a really cool tattoo because it looks great on fingers and ankles. It is a symbol of time passing by, but remembers you to watch out what print you will leave yourself for the next generations.

It is mainly made in grayscale because it gives the sign of aging to it. It is a very well-liked girl tattoo, and is often settled on their ankles or behind ear. It doesn’t require a lot of sessions and therefore those who cannot bear much pain usually get one of these.

Dinosaurs have great-looking skulls so people often tattoo only that and not the entire body because the skull always looks majestic. The skulls look great both in small versions and in big.

Especially effective can be a tattoo of the whole dinosaurs but only its skeleton, like it can be seen in museums. People who are interested in biology and similar sciences usually get this one.

Skulls mostly represent death and the end, but a human with a dinosaur skull tattoo wears a different meaning. It expresses his acceptance of death and a wish to stay remembered, in his majestic form.

Dino skull tattoo doesn’t have to represent death if you don’t want to. It can just be a sign of respect to those magnificent creatures.

Since the dinosaurs don’t have any stronger meaning and you are probably not familiar with any of the extinct species, you can simply choose the design you like best and put it where it seems best.

People sometimes combine a lot of different types together, especially if they cannot decide which one to pick out. You can go as far as having many of them in a row, maybe marching together.

This tattoo is great as a centerpiece on the back and it includes a masterpiece of two dinosaurus in struggle, detailed to the tiniest thing. It looks extremely powerful and the tattoo makes the dinosaurs almost alive.

It is best made in black and white color since it gives it an authentic older look. Many people that used to go through something very tough love this tattoo because it helps them to remember the fight and to be proud of themselves.

This is an animal which cannot be forgotten.  Made famous by the same named movie called “Godzilla”, the beauty of this fictional dinosaur is hard to forget.

Godzilla was a movie which broke records and it fits that the Godzilla tattoo is as great as the movie.

Colorful dinosaur tattoos must be done with care because too much different colors can make a dinosaur look too funny and not scary at all. However, if this is the look you are going for, don’t be afraid to make a rainbow dinosaur.

This is a tattoo that is usually popular amongst young people and those who are into art. If you want to connect the dinosaur with your country, you can paint the skin with the colours of your flag, but this will take multiple sessions and is usually better for those who can tolerate more pain.

Dinosaur egg tattoo is a tattoo which shows the birth of a dinosaur from a giant egg. It is mostly made with the head and the paws out of the egg and the shell almost completely broken.

This is a tattoo which often has a deeper meaning to its bearer. It shows his ability to overcome a big life trauma and be born again stronger and meaner. This tattoo is bigger and the dino looks dangerous.

It is a also a good choice for women who want to show their passion about bringing life and to show their love for children. In this case, the tattoo is colorful, smaller and more cute.