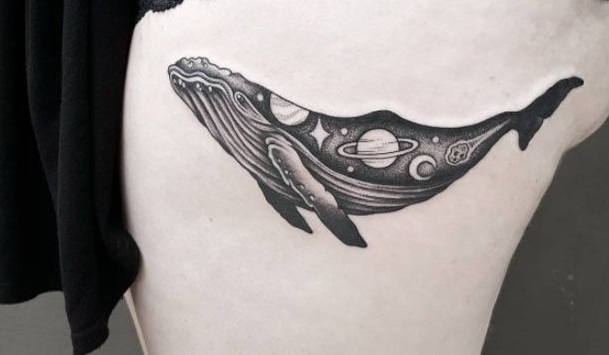 The best known members of the whale family are probably the humpback whale, the killer whale, the orca whale, the blue whale and the small whale. Some species of whales have beards and feed on plankton by filtering them, or seven – other whales feed on small fish, crustaceans or squid. This is why biology differentiates between baleen whales and toothed whales.

The whale has always taken a special and, above all, central role in people living on the coast or on islands. In many places he is considered a “world fish” and a “pillar of the Unviersum“, which is directly involved in the creation of the world – either because he symbolized by his size an island or because out of his mouth, the continents came out. It is even said that there actually were sailors who kept a resting whale on the surface for a piece of land and tried to dock there. Whale songs are according to mythology of the sirens (mythical creatures from Greek mythology) come, which is why later came the assumption that in the whale to live a beautiful woman who produces these sounds and protects the ancient knowledge.

Legend has it that this woman is the soul of the whale. Many stories of sailors and Indians tell of how people are spit out and swallowed again (even the biblical story of Jonah and the whale). Those who have gone to or into the sea on the basis of a vision search are also said to have been devoured by a whale and come to the knowledge within the whale. Supposedly, the interior of the whale, the silence and its songs were a great help for retreat and reflection.

Perhaps that’s why they tell him a connection to sunken continents and cities like Atlantis and Lemuria. His memory and experience are said to transcend some of the mythologies that follow all beings, which is why the spiritual world should have chosen him to preserve ancient wisdom and ancient ways. It is said that the whale knows the seemingly vanished paths to the sunken continents and strictly guarded them. Due to the fact that whales are the oldest animals in the world (up to 50 million years), they should possess the knowledge of the entire world history and be incredibly wise.

In the fantastic wildlife film “The Mystery of the Whales” (Veronica Ferres, Universum Film, 2009) it says in the end: “Whales are the memory of the world and the guardians of time.” And there is nothing that could be added to that.

If the whale comes up to you from the depths of your ocean, or if you perceive its singing, it will be time to dive into the depths of the ocean and trust in the experience and strength of the whale. So if the whale reaches your life as a power animal, it’s time to indulge in the healing and purifying power of the water and get to the bottom of things instead of just looking at their surface.

The power animal whale takes you into the depths of being, on a journey through world history and your own life. It guides you on the direct path to the old knowledge that lies dormant in you and is urgently needed for your current life’s work. With his help, you will get back the old knowledge and at the same time come to new wisdom. Follow the whale, explore the vastness of the ocean with it, and see the source of all life to help you understand and appreciate life. So if the whale comes into your life as a power animal, it will provide spiritual and emotional development by releasing the old knowledge and showing secret ways. With its help, you can regain basic trust and heal internal injuries. Maybe your inner child or soul part of you has been waiting for a long time to become healthy and reintegrated. The whale is a powerful and at the same time gentle soul guide, who leads you through the vastness of the sea at the end back to yourself.

In addition, he examines your intuition and to what extent you trust it. What about your sense of community, your teamwork and helpfulness? Are you ready to give if you get something? All these are questions that you would like to confront the power animal whale. Take the time to retreat and listen to the whale songs. Turn to the music and the sound healing, because there you will find further impulses or even keys to solve the current life task and opening previously locked doors.

The thawing or blowing of a whale in the dream points to an examination of one’s own emotional world. Seeing you in a dream come down a whale, this one wants you to follow him, so that he can give you in depth the answers to your questions.

At the same time, it also means that the whale wants to share its ancient knowledge with you and share its wisdom with you. If you follow the whale in the dream, you may get to secret places and gain hidden knowledge – so do not miss this chance if you are invited by the whale. 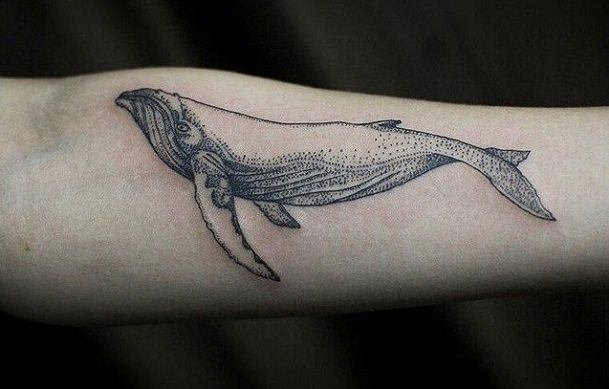 Tattoo “Whale” is a motif that does not happen very often. Many butterflies, lions, eagles, ornaments, inscriptions, etc. are much more popular. However, some people use this motif. Well, in it, as in any other, the meaning is hidden. And it’s worth telling.

Tattoo “Whale” – work is special. These animals are considered one of the most dimensional and impressive in the size of mammals. In humans, they are causing admiration, surprise, awe, and a slight feeling of awe. It should be noted that the tattoo “Whale” has a value that reflects all the attributes that humans have given to these creatures for more than a decade. It is the depth, the power, the freedom, the size, the nobility, the meaning. If you believe that a worldview, which distinguishes ancient nations, whales are creatures that control the element of the ocean. God has endowed them with divine qualities that no one else has. Many thought that.

And there was also a special cult in Greece, a faith in a goddess called Keto. She was a patron of the ocean. That name was taken as the basis for the name of the whale. People have long understood these creatures as messengers from above. Too uncomfortable seemed to be due to size and mystery – because there was no information about them.

In ancient times, as it was already possible to understand, this animal symbolizes only that good. However, in Christianity, the tattoo “Whale” has a completely different meaning. According to the Orthodox worldview, this will be connected with hell, with hell. However, if we take into consideration the literal interpretation of this approach, then the image of this personification of death and subsequent re-birth is then. Finally, as it was said, it was a biblical Whale of whales that threw it on land.

For example, for sailors, the tattoo “Whale” on hand was associated with a danger that is, in principle, logical. After all, the element of water is filled with something incredible. And we do not know the limits of her power. So the sailors were sure that whales could easily drown a large ship and a small ship, pulling the ocean to the ocean.

But according to some other beliefs, the whale is even the type of totems. And these beliefs are based on the famous version of the origins of the world. Apparently, the three whales hold the ground together with elephants and turtles. It characterizes these animals as something cosmic, unreal, and colossal.

Many people choose to fill up such a tattoo just as a sign of something serious, heavy. Everyone puts his meaning on the picture. Someone is connected to a whale, finds common features, knowing how calm, calm, but confident. Others are like images. Third – own reasons. But in any case you need to find a good drawing and choose a consistent version of the performance. Only in this way will it be possible to become the owner of a really high quality tattoo. Well, this usually helps a tattoo, which in this case has enough experience.

Living in the depths of the ocean, this gigantic mammal has always been a kind of symbol of male charm, positive and negative. For a long time the sailors were afraid of whales, fearing their impressive sizes, strengths and mysterious undiscovered underwater movement. The most famous of these “ocean monsters”, of course, is Moby Dick, the famous white Whale from the American novel Herman Melville. Now whales are still hunting, putting them at risk of total extinction.

However, many people are trying to protect them. For example, joining the Sea Shepherd, often cooperates with international tattoo conventions and collects money to preserve and protect marine life.

And yes, the Whale has its deserved place in the art of tattooing. Of course, thanks to the sea wolves under the influence. Now this peaceful and beautiful animal with its harmonious shapes can take its place on your skin once and for all. This deep diva often appears in fantastic literature (for example, in the book “A Guide to the Gravity Autostopers”) and – flying in the sky, as if floating in the water. If you want to fill a merciless whale, showing your strength, then you can pay attention to or, because. In these styles, the whale often descends with ships or fights with an equally cruel octopus.

Perhaps you want to capture the religious meaning of the prophet Jona and how he was swallowed by a “great whale” (do not think whales do not eat people!). But if you want more poetic, quiet part of this mammal, you can find inspiration, and. Also, do not forget where the image of whales is also significant for the peoples of the Pacific Ocean, which shows great respect for its quiet neighbors.

I think you’re completely ready to dive into the underwater tattoo world! Look at these beautiful and varied tattoos of whales. And remember: saving not only whales, but all animals, is extremely important for the future of the Earth and our own.