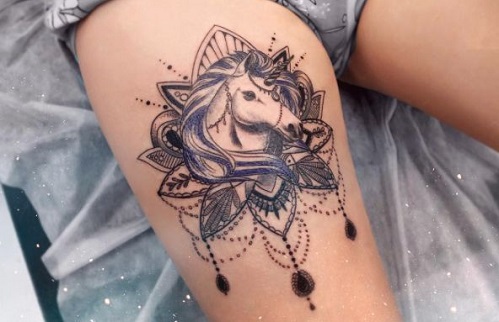 It is interesting that in the 4th century, before the new era, the first doubts were raised that the Earth was not a plate, but that it was a ball-shaped form (Aristotle), which was scientifically proven only a thousand years later, and that tattoos were more famous for centuries. It is interesting that the shape of our planet can not be changed or that something new is discovered about that fact, and tattooing becomes more advanced every moment.

From that, I would first introduce you to Otzie, the Ice Man who lived in the Copper Age (about three thousand years before the new era). Although it is not the oldest proof that tattoos were used long ago, it is still the first one discovered in modern society. It was found in 1991 in the Alps, and with the help of x-rays, it was found that it had (still has?) Bone degeneration.

Scientists believe that in the Copper Age tattooing was used for medical purposes, in order to reduce pain, on the Ice Man, tattoos were found in areas where the bone problems were most common – on the lower part of the back, knee, feet and joints.

Certainly, tattooing looked different from that which we have today; the color was absorbed into the skin by rubbing coal dust at the desired location.

This culture was popular in Egypt, especially among women who were dancers. Although you probably think first of all that they were prostitutes, it’s not true. On the contrary, the tattoos found on them represented the symbols of the deity, fertility and joy at that time.

Although at first the Old Romans refused to decorate the body, later, seeing the tattoos highlighting the masculinity and cruelty of Celtic warriors, they accepted this practice and marked their soldiers with their own symbols. As they never fled from progress, the Romans perfected the application, but also the removal of these white ones.

Unicorn is one of the most mysterious mythological creatures. Since ancient times, it has been idealized in countless stories, songs, legends and myths. According to mythology, the unicorn is a white horse with a horn on its forehead, whose body runs silver blood. He is a symbol of the purity, chastity, and virginity of the soul. But, despite the widespread belief in its existence, for centuries there is no evidence of the sight of these creatures. Today, unicorns with pearl bodies and long, spirally cut horns dominate the imagination of the public, and the heroes have cartoons and video games.

It is believed that once upon a time unicorns lived on earth. They are often described as strong and fierce mythical beings. It is believed that a man was not born who could seduce him and that only the virgin of the pure soul can be associated with him.

Horns of the unicorn were on the price and they were paid in gold. They were thought to possess healing properties. The dust made of his horn was considered a miracle drug for all diseases. It was also believed that a man who drinks water from the horn of a unicorn will be protected from every poison.

There is a belief that one who kills and drinks the blood of a unicorn will be forever damned. Also, it is believed that his blood can save a man at death, but then he is condemned to the curse of half-life.

In popular belief, the spirally wound horn is considered a symbol of the heavenly primal force, the development, the transformation and the ascent. 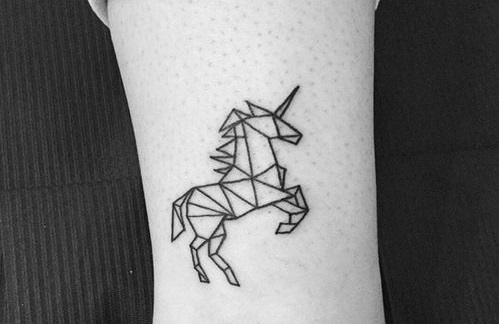 In Celtic mythology, the unicorn guards the feminine mysteries and embodies the virginal aspect of the Triune Goddess. In addition, he is said to have a connection to the mysterious and legendary island of Avalon, the apple tree and also the love fruit (the apple) itself.

In many Germanic and Celtic legends unicorn and dragon stand for the good and the bad, which are equally strong and deliver an eternal fight. According to the Christian idea, the unicorn is said to have jumped in the lap of the Virgin Mary. Thus, it is a symbol of Christ and thus the unicorn also corresponds to the Christ consciousness known today in the esoteric.

Depending on culture and religion, the unicorn appears in various forms. For example, the unicorn is similar in some pictures to a horse (Europe), an antelope (Egypt) and even a cow (China), in other pictures it also has a lion’s tail and goatee. The most common and well-known representation of the unicorn is based on the Celtic conceptions and refers to a white horse with a twisted horn.

If the unicorn turns up as a power animal, it tests the purity of the heart and the ability to serve in humility. Like the power animal Pegasus, the unicorn is also closely related to the upper worlds and their inhabitants. Anyone who makes contact with the unicorn will find it mostly in the forest, where it is well hidden and only rarely appears. When you see it in shamanic journeys, dreams or meditations, you see it mostly in clear waters like small lakes or ponds drink and disappear immediately in the thick cloud. Not infrequently, Elves in his vicinity, who take care that nothing happens to the unicorn and that it remains hidden – just as the unicorn does the same for the Elves.

The power animal unicorn does not come to everyone and carefully selects his protégé. Only people with good intentions and a pure soul can see it and understand its language, for all others the unicorn remains invisible and mute. Because, according to legend, it can only be captured by a virgin girl. This means that the basic essence of the unicorn being (and of your own being as well) can not be captured by physical-material means, but only by innocent receptivity.

The unicorn as a power animal usually comes into its own life when an initiation is imminent. Not infrequently, the power animal unicorn challenges his protege to follow him and unconditionally trust him – even if the path may seem eerie, threatening or dangerous. The unicorn often leads us through a dark, dense forest or through a barren mountain to test our confidence and our courage. Who has passed is more than rewarded, because the goal has mostly been worth the effort: It is said that unicorns only lead people with a pure heart to the gods and their temples, which only a few people get to see anyway. In addition, the unicorn as a power animal shows you hidden treasures – be it in yourself, in the spiritual or material world.

Although the unicorn is a gentle and loving creature, its power animal medicine and its magic are especially strong. When it comes down to it, the unicorn knows how to defend himself and his protégé from demons and evil dragons – just as mythology has taught. The unicorn is the purest of beings, showing you how to spiritually and emotionally purify and protect yourself in order to awaken the divine in you and connect with the upper beings. If the unicorn is allowed to touch his horn, he should accept this offer humbly and gratefully, because there is no better proof of confidence – besides, the horn of the unicorn possesses magical powers that heal wounds immediately and without scarring and immediately from occupations or negative energies should be able to liberate.

If a unicorn appears to you in the dream, it draws attention to innocence, virginity and childish naivety. But it also announces the contact with beings of light and forthcoming messages from the beings of light. Whoever is allowed to touch or ride a unicorn in a dream becomes part of healing and purification on the highest level.

Presentation unicorn in today – a mystical animals divorce feature is the spiral horn. Tattoo shows unicorn often chosen as a symbol of the femininity. Sketching such a tattoo should perform professional master because of its complexity. Scientists believe that in the Copper Age tattooing was used for medical purposes, in order to reduce pain, on the Ice Man, tattoos were found in areas where the bone problems were most common – on the lower part of the back, knee, feet and joints.

Unicorn tattoo is more common among the females, because according to ancient mythology, making friends with him was only possible by girls. Therefore, the basic value of such tattoo – chastity, purity and beauty is ideal. However, the unicorn is not without splendor – he submits to no one.

But to put this tattoo and be human, as a symbol of the unicorn, everyone can set their own personal sense, and then it will play the role of a mascot. There is another meaning of tattoo unicorn – power and courage. That is why the image of a winged horse is considered one of the strongest symbols.

This meaning evidently came from Chinese folklore and the Old Testament. These sources tell how these magnificent animals help people in need. In addition, unicorn tears for the physical and mental torment described as a remedy, and endowed with an antidote. In Chinese culture, this creature represents wisdom, happiness, longevity, justice, and sincerity.

There are values ​​that are no longer relevant and rare. It is an association of such tattoo with Paganism and Christianity. It’s interesting to see people’s trust in the fact that the man who met a live unicorn is learning all the languages ​​of the world.

The peak of popularity of the tattoo unicorn happened in 60-70s of the last century, but today the image on the body of the mythical creation has lost popularity. This is due to the interest in this species, as well as clearly positive sense, since nothing else than good, bright and clear when looking at a tattoo does not occur.

Tattoo unicorn meaning can also be complicated with a task of representation. Drawing can be done in any color and style – everyone has their vision specialists. Apply the Unicorn tattoo in a  most prominent place. Unicorn tattoos can be very colorful and interesting, especially if you find a talented artist who is going to do a great design.

Unicorn tattoo often have the characteristics of bright colors, usually pink, light purple and white. Many of for example single-breasted tattoos show a well-defined portrait of unicorns in an equally magical forest, sometimes in a gallop while sometimes standing perfectly and always staring straight at those who look at the tattoo. A lot of people like to use a portrait that allows a lot of details on the rogue, the gray and the expression of the unicorn.

Unicorn tattoo can display a realistic creature, or something quite unnatural. One example of this is the Victorian cherry blossom with horses. With the unusually elongated body, the head with over-sized features, and horns can have very little color and detail. Their shrubs can be long and slightly wavy, they can have intricate, spiral pattern or sleek and silky.

Sometimes people love to have unicorn tattoo designs that include more fantasy figures. The idea for a great design would be a one-legged race with Pegasus, a broom with Centau, or a fight with a dragon.

Mythology also mentions that the unicorn also fought with the lion. One-off presents spring and lion summer, every year they struggled to dominate the season. In this design can be created a living image, unicorn in the spring environment, with blooming flowers around it and a lion in the summer scene, with a glowing sun behind her back.

Tattoo of a unicorn can be an adult version of a child’s ideal. Unicorn often represents the beauty and innocence of most fantasies, and these tattoos can be new ideas and new designs for the external expression of the same characteristics. Tattoos and one-of-a-kind designs that, because of their mystic and beauty, are most often seen on a woman or girl. It is also not surprising to see these beautiful designs on a man.