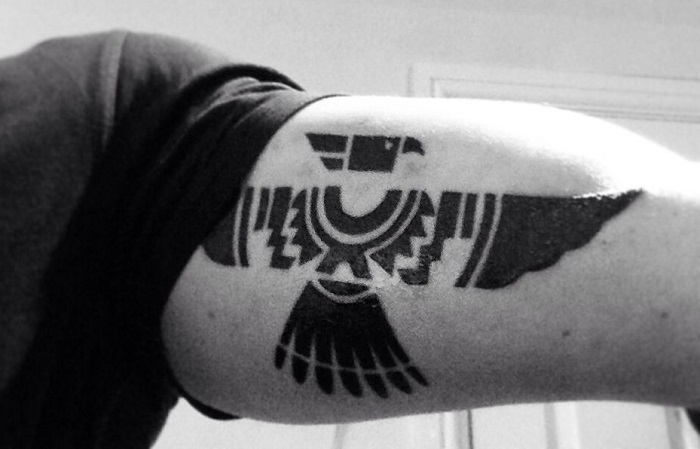 The oldest evidence comes from the Italian-Austrian border where in 1991, on the Otzalet Alps, the frozen and well-preserved body of a man that scientists believe lived about 5300 years ago is found.

Otzi, as has been dubbed, presents in various parts of the body real tattoos, obtained by rubbing coal pulverized on vertical incisions of the skin. X-rays have revealed bone degenerations at these cuts, it is therefore thought that, at the time, the inhabitants of the area practiced this form of tattoo for therapeutic purposes, to alleviate pain. With the passage of time, the tattoo takes on other values. The funerary paintings of ancient Egypt show tattoos on the bodies of the dancers, tattoos found also on some female mummies (2000 BC).

The Celts worshiped animal deities such as the bull, the wild boar, the cat, the birds and the fish and as a sign of devotion they traced the symbols on the skin.

Among the ancient Romans, who firmly believed in the purity of the human body, the tattoo was forbidden and used exclusively as a tool to mark criminals and convicts; only later, after the battles with the British who wore tattoos as distinguishing marks of honor, some Roman soldiers began to admire the ferocity and strength of the enemies as much as the signs they wore on the body … and they began to tattoo themselves on their skin their distinctive brands.

Among the early Christians it was common practice to oppose their faith by tattooing the cross of Christ on the forehead. In 787 d.C. Pope Adrian forbade the use of the tattoo.

In the eleventh and twelfth centuries, the crusaders carried the mark of the Cross of Jerusalem on the body, this allowed, in case of death on the battlefield, to make sure that the soldier received the appropriate burial according to the Christian rites.

After the Crusades, the tattoo seems to disappear from Europe, but continues to flourish on other continents. In the early 1700s, European sailors came in contact with the indigenous peoples of the islands of Central and South Pacific, where the tattoo had an important cultural value. When Tahitian girls reached sexual maturity, their buttocks were tattooed black. When suffering, the Hawaiians tattooed three points on the tongue.

In Borneo the natives tattooed an eye on the palms of their hands as a spiritual guide that would help them in the passage to the afterlife. In Samoa the “pe’a” was widespread, a tattoo on the whole body that required 5 days of endurance to the pain but it was proof of courage and inner strength. Those who succeeded in the enterprise were honored with a big party.

From Cook’s notes (1769), we know that one of the methods mainly used by Tahitians to tattoo was to use a sharp shell attached to a stick. In New Zealand the Maori signed their treatises by designing faithful replicas of their “moko”, personalized facial tattoos. These moko are still used today to identify the wearer as belonging to a certain family or to symbolize the achievements gained during the lifetime.

In the twenties of the nineteenth century began the macabre custom of bartering guns with tattooed heads of Maori warriors. To cope with the demand, slave traders even went so far as to tattoo the natives captured in battle and then kill them and sell their heads. Only in 1831 the British government finally declared the importation of human heads illegal (!!!).

In Japan, the tattoo was practiced since the fifth century BC … for aesthetic purposes … but also for magical purposes and to mark criminals.

Curious to know that the birth of the beautiful oriental tattoos that we all know today is due to the imposition in ancient Japan of harsh repressive laws that forbade the low-ranking population to bring decorated kimonos. As a sign of rebellion these same people began to wear, hidden under their clothes, huge tattoos that covered the whole body starting from the neck to get to the elbows and knees.

In 1870 the Government declared this practice deemed subversive to be illegal, but the tattoo continued to flourish and prosper in the shadows. Easy to understand how the Japanese mafia Yakuza, willingly adopted the “outlaw” practice of tattooing on the whole body.

Their very elaborate drawings usually represented unresolved conflicts but also reproduced symbols of quality and characteristics that these men intended to emulate. For example, a carp represented strength and perseverance, a lion’s ability to perform courageous deeds.

This interesting creature belongs to North American culture and the tribes who lived on the North American continent. This supernatural creature was often used as a symbol on totem poles and people prayed to it, as if it was a known deity. We all know how important nature was to the indigenous North American people, so there is no wonder a creature like this was significant in religious sense.

Thunderbird was the ruler of the world above the ground and the underworld was in control of the vicious panther or in some instances a horned serpent. The purpose of the Thunderbird is to fight against the spirits under the water. They lived on all four sides of the world and anyone who would dream about a Thunderbird is soon to become a war chief.

Choosing a place for your tattoo is a great choice first of all because you can save yourself some pain. Wrist for example is not a very large area, which significantly limits the types of subjects that can be reproduced there.

In the case of subjects with many details is not very recommended, just because they would be too compressed and would still need a very good expert hand to make them look good, but it is perfect for lettering and writing. In addition to healing very quickly the wrists have another valuable feature: a tattoo can be easily covered with watches, bracelets, etc., which could always be useful on jobs and in situations where maximum decorum is required.

Tattoo on the ankle is one of the most painful areas of the body, just because the epidermis is close to sensitive parts such as bones, but it is certainly one of the most feminine places to make a tattoo.  Also in this case, as the surface is not very large, small subjects such as stars, hearts, floral decorations etc. are generally chosen. The ankle is one of the easiest areas to cover with boots, socks, very suitable for those who do not want to put their tattoo always on display.

Tattoo on the ear is also popular and the ear is composed mainly of cartilage and during processing there is not much pain, generally a slight tingling is caused. You can decide to tattoo something on the lobe, on the top or in the inner ear and, given the size, the most suitable designs are small flowers, stars, musical notes etc. To emphasize the tattoo, it is also possible to create something that can be combined with an earring or a piercing, so that the two decorations can marry well together.

Tattoo behind the ear is a very versatile choice when it comes to hiding or discovering the tattoo, especially for those who have sufficiently long hair.

Tattoo on the inside of the arm is one of the places where it is more difficult to hide a tattoo, especially in summer, but it is a very feminine place that lends itself very much to written, tight and compact subjects or bracelets that wrap the entire arm .

Even in this case it is not a very painful area, the only warning is to pay attention to the orientation of the subject, since the arms are very “mobile” parts must consider the fact that the design can be seen straight, bias or even turned upside down in particular circumstances. For those who choose this area we recommend a small but significant lettering, a phrase that you want to keep in mind and observe in intimacy, just raise the arm slightly to have an easy reading and a sensual perspective of your arm.

Tattoo on the finger given the presence of bones immediately under the skin can be very painful, but it will surely be a pain of short duration, since the space to be tattooed is very small.

Tattoo on the shoulder is ideal for those who do not want a tattoo always visible, especially for work or similar issues. Given the difficult position to reach, it is necessary to take particular care in the post-tattoo treatment, better if there is a person able to help you. The shoulder is one of the most classic positions because one of the most versatile, you can really choose any type of subject and size, you will almost always be able to find something harmonious for your body.

Tattoo on shoulder top is very sensual because it is the natural extension of the neck and because it is in one of the areas that is not too visible. Half is hidden from the neck of a wide shirt, the shoulder of a bra or clothes in general.