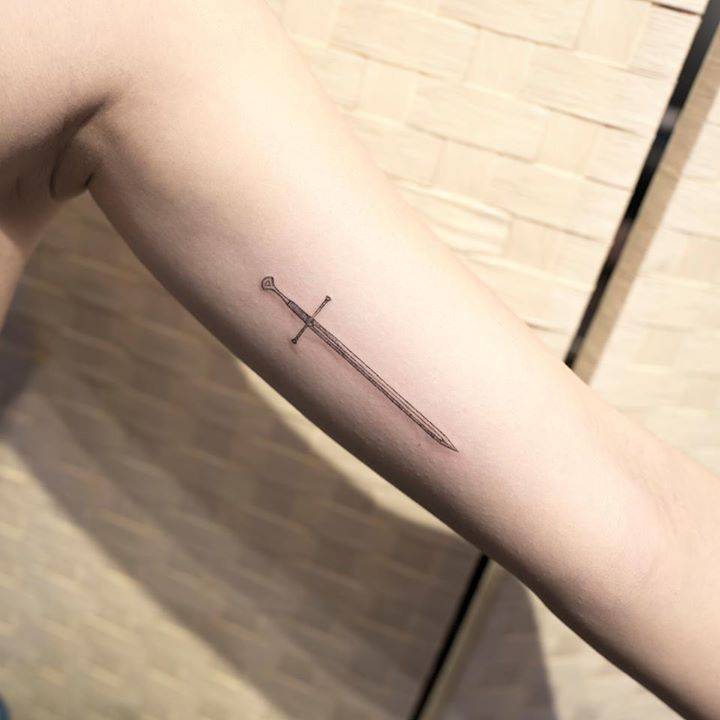 Sword tattoos can be a popular choice for men, women, and couples alike. The design itself is not only simple but the meaning behind it makes this tattoo an attractive choice.

This article will discuss sword tattoo meanings, as well as covering some other aspects that should be taken into consideration before you get your ink done.

We’ll also provide you with some tips on how to go about choosing a tattoo artist and finding the right sword symbolism for you.

There are a number of different reasons why someone would choose a sword tattoo, however there is one primary motive for which this type of design is chosen over any other.

The sword stands for power, strength, and determination. It is also viewed as an object of defense. The sword is used to protect at all costs, even if it means giving up your own life for the sake of another.

Sword tattoos are often associated with individuals who have served in the armed forces or police force. Individuals within these professions claim that it is their duty to protect those that can’t protect themselves. Their sword protects the weak and innocent.

This design is also often chosen by those who would like to show their strength and courage in overcoming personal problems or hardship. This can be seen as a display of power, as you are able to push through hard times and come out on top stronger than ever before.

A sword is also the perfect design for those who are strong of will and desire victory through peace, not war. Having a sword tattoo can mean that you are willing to fight to defend your beliefs but only if you need to. The notion of being peaceful while having the strength needed to protect what is important makes this an attractive option for many.

A sword can also be used as a design for those who follow the spiritual path and its associated ideologies. The sword represents purification of negative energy and protection from evil.

This makes it a popular choice among those who follow pagan beliefs and practices such as Wicca, as well as those within Buddhist, Judaic, Christian, and Hindu religious practices.

The sword is one of the oldest tools used by mankind and has been incorporated into many spiritual rituals throughout history, which can make it an attractive design for those interested in spirituality, if you haven’t already found more attractive designs.

In many cultures, a sword is used as a symbol of loyalty to one’s nation or family. The trust and honor that comes with this design makes it a popular choice among those who have a strong sense of familial ties. It can also be chosen by those who wish to show their allegiance to their friends, partners or even their employers.

Groups such as the Freemasons and Knights Templar often choose a sword tattoo as a sign of their loyalty to one another. This can be seen as a display of power, strength, and courage.

Some people choose to incorporate a sword with another design to create a unique piece of body art. They may also choose your designs based on its meaning, in order to convey the message they wish to send in the most appropriate way.

Sword symbolism in different cultures – what does a sword represent?

The sword has been used in many different cultures throughout history. This makes it possible to find designs that are associated with the culture you belong to, or choose a design based on your heritage.

In Japanese culture, the sword or Katana is traditionally used as a weapon in battle. The Samurai often chose to place their family crest on the sword they carried into combat. This practice can be seen as a way of showing loyalty to one’s ancestors.

The katana was made famous during Japan’s feudal period, when it became known as one of the deadliest weapons used in combat. Thus, a katana tattoo meaning can represent honor, courage, and respect.

Today, people often choose a katana sword tattoo design to show this sense of loyalty and honor toward others. It can also be used to display courage, strength, and power in order to face difficult challenges in life or career paths.

In Thai culture the sword is often viewed as an object that represents power reserved for royalty only. Having a royal symbol as your body art, such as a sword, would have meant you were someone special in society. These symbols are still used by many royals today when they go into battle or when they need protection from their enemies.

Having a sword tattoo design is associated with the Thai belief that the sword is a symbol of purification and protection from evil, as well as strength and courage. For example, a sword hand tattoo in a warrior might mean a pure and protective hand in combat.

In Aboriginal culture, the sword design has many different interpretations. Although it can be used to display loyalty to one’s people or ancestors, it has a more complex meaning than that.

The sword tattoo was often associated with achieving manhood in young men of the tribe. Before they went off to seek their fortunes, they would choose a sword design to represent their power within society. This meant that they were able to form strong bonds with other members of the tribe who shared similar symbols in their body art .

It was also believed that having this type of tattoo, especially if you had your enemy’s blood on your weapon, would give you the power to take over his land and property.

Today, many people choose this design for a variety of reasons. Warriors often use it in order to convey their message in an obvious way. It can be seen as suitable for those who have strong desires for self-protection or wish to demonstrate courage in the face of adversity.

The sword tattoo is also associated with honesty, loyalty, and purity. By combining it with other designs that are meaningful to you, such as entwined snakes which represent rebirth, you can create a piece of body art that has deep personal meaning.

There are many different styles and designs. The simplest designs are often tribal in nature with straight lines, sharp points, and no shading. These can be placed anywhere on the body you desire.

Tribal designs are often chosen to show one’s affiliation with a group or belief system, which renders this style popular among many groups including bikers, athletes, and fraternities.

Thicker tattoos that have intricate details seem to work well for sword designs as they emphasize the idea of strength. Details can be added in any way desired by the wearer but they should always ensure it looks good when they are viewed from a distance.

A tattoo artist will be able to help you choose when it comes to designing your sword tattoo. They will know what works well together and may even have some ideas for you to consider. They can also help you decide on the size and placement of your design, as these factors will determine how visible it is to those around you.

Choosing a tattoo artist who specializes in this style of tattooing is always recommended as they know the industry well and will be able to deliver exactly what you want.

So, what does a sword tattoo mean?

Sword tattoos are a unique way of displaying one’s personality and they can mean many different things to many different people. They often represent strength, spirituality or family ties, so this style is popular among men and women from many different walks of life.

It is recommended that you only have a sword tattoo if it has a special meaning to you and that you do not get one simply because someone else would find it attractive. This way, when people see your design, they will know exactly what it means to you.

We hope that this article has given you some ideas about what your sword tattoo may represent to you!