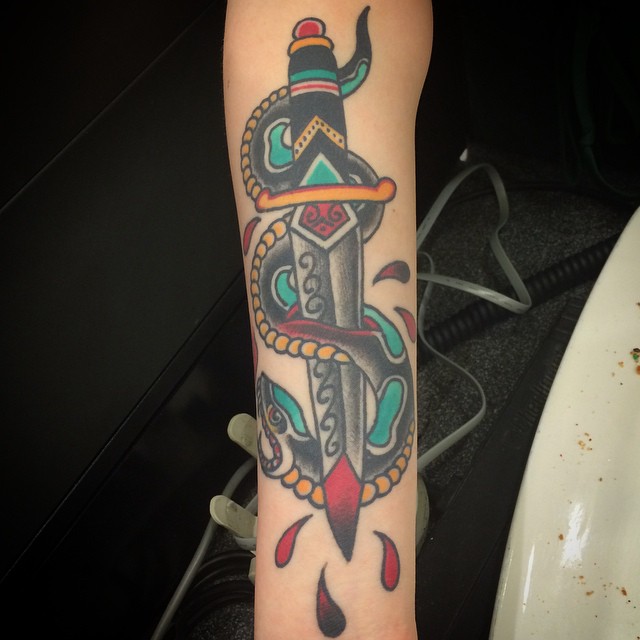 Snakes have been associated with many meanings throughout history, ranging from good to evil. They are often seen as symbols of transformation due to their ability to shed their skin. In some cultures, they are also seen as protectors or healers.

Daggers, however, are often seen as symbols of aggression and violence. They can also be seen as protection against these things. Combined, the snake and dagger tattoo meaning can represent many different things depending on the person wearing it.

Some people may choose this tattoo to symbolize their ability to protect themselves from harm, while others may see it as a reminder to stay vigilant and be careful of those who may wish them harm.

No matter what the dagger and snake tattoo meaning is for you, it is sure to be a powerful and meaningful design. Here is all you need to know about the snake and dagger tattoo meaning.

What Does Snake Tattoo Symbolize?

In some cultures, snakes are seen as helpful creatures that can guide us through difficult times. In others, they’re feared and seen as evil. Snakes are often seen as symbols of new beginnings, change, transformation, and healing. They can also represent danger, death, and darkness.

The interpretation you give to a snake tattoo depends on your own experiences and beliefs, as well as the tattoo’s context. Nevertheless, some general meanings can be derived from snake tattoos as well.

Here are some of the most common snake tattoo meanings:

Snakes are known for their ability to shed their skin and emerge anew. This makes them a symbol of change and growth. A snake tattoo can represent the changes you’ve gone through in your life or the changes you’re currently going through. It can also be a reminder to keep growing and evolving.

Rebirth and regeneration are often associated with snakes. They’re also associated with the curative powers of nature. A snake tattoo can represent your journey of healing or be a reminder to keep moving forward even when times are tough.

Snakes are often seen as dangerous creatures, and they can represent the darker aspects of our nature. A snake tattoo can be a warning to others that you’re not to be messed with. It can also be a reminder to stay alert and be careful of the choices you make in life.

In some cultures, snakes are seen as symbols of death and destruction. A snake tattoo can represent the end of a cycle or the death of a part of yourself that you’re ready to let go of. It can also be a reminder that life is unpredictable and always changing.

In many religious stories, snakes are seen as temptresses that lure us into making bad decisions. A snake tattoo can represent the temptation to give into your darker impulses. It can also be a reminder to stay true to yourself and resist temptation.

What Do Dagger Tattoos Symbolize?

Daggers are often seen as symbols of aggression, violence, and death. They can also be seen as symbols of protection against these things. Daggers have been used throughout history as weapons, and they’re often associated with warfare and bloodshed.

Personal experiences determine how you interpret a dagger tattoo. However, these tattoos have some general meanings.

Here are some of the most common dagger tattoo meanings:

Daggers can be seen as symbols of protection against violence and aggression. They can also be seen as a way to ward off evil spirits. A dagger tattoo can represent your need for protection or be a reminder to stay alert and be aware of the dangers in life.

Daggers are often seen as symbols of aggression and violence. They can represent the darker aspects of your nature or be a reminder to stay calm in the face of adversity.

Daggers can represent the end of a cycle or the death of a part of yourself that you’re ready to let go of. They can also be a reminder that life is unpredictable and always changing.

Daggers are often seen as symbols of strength and power. They can represent your ability to overcome adversity or be a reminder to stay strong in the face of challenges.

Traditional snake and dagger tattoos are popular among those seeking meaningful and impactful tattoos. This tattoo features a snake coiled around a dagger, with the blade pointing downwards. The meaning of snake and dragger tattoo can vary depending on the specific design elements that are used, but it typically symbolizes protection, strength, and power.

The snake is a powerful and often feared creature, which makes it the perfect symbol of strength and power. The dagger represents protection and defense, making this tattoo a perfect choice for those who want to show that they are prepared to fight for what they believe in.

Together, these elements create a tattoo design that is both meaningful and visually stunning. It is also thought to be a good luck charm, especially if the tattoo is placed on the right side of the body. The dagger and snake tattoo can also be seen as a symbol of rebellion or defiance.

What Does A Snake And Moon Tattoo Mean?

A snake and moon tattoo can have different meanings depending on the culture you come from. In some cultures, the moon is seen as a feminine symbol while the snake is seen as a masculine one. When these two symbols are combined, they can represent the balance between masculine and feminine energies.

In other cultures, the snake is seen as a symbol of change and renewal. This is because snakes shed their skin to renew themselves. The moon also goes through different phases, from new to full. So together, these two symbols represent the cycle of life and the changes we go through.

If you’re going through major changes in your life, you may want to get a snake and moon tattoo to represent this. It can be a reminder that change is a natural part of life and that you can make it through anything.

What Does A Snake Tattoo Around A Sword Mean?

The snake is often seen as a creature feared by many, so having a snake wrapped around a sword can show that you are not afraid of anything or anyone.

A snake wrapped around sword tattoo can symbolize many things. Also, it may be a symbol of the snake’s journey and its need to heal. It could also represent Asclepius, the Greek god of medicine and healing. This tattoo could symbolize the healing power within oneself or the journey of self-discovery that comes with it.

No matter what the snake wrapped around sword meaning to you, it is sure to be a powerful and meaningful symbol.

Here are some snake and dagger tattoo ideas that you may want to consider:

This dragger tattoo symbolizes things like breaking away from the constant cycle of life and death. Here the snake is looking defensive and ready to attack. The dagger piercing through the snake’s head shows that there is a way to break free from this cycle.

Here the leaf symbolizes the circle of life and death. The dragger also looks embellished with thorns which could be a warning to not take this tattoo lightly.

This snake and dagger tattoo is in traditional Maori style. The snake here again stands for new beginnings, change, healing, and fertility. The dagger through the snake’s head means that there is a way to break free from the cycle of life and death.

This is all you need to know about the traditional snake and dagger tattoo meaning. These tattoos are popular among both men and women and can be designed in many different ways. For some people, it may represent danger and death, while for others it could simply be an aesthetically pleasing design.

Whatever the meaning may be, there is no doubt that snake and dagger tattoos are some of the most popular designs out there. If you are thinking about getting one, be sure to do your research and find a design that means something special to you.