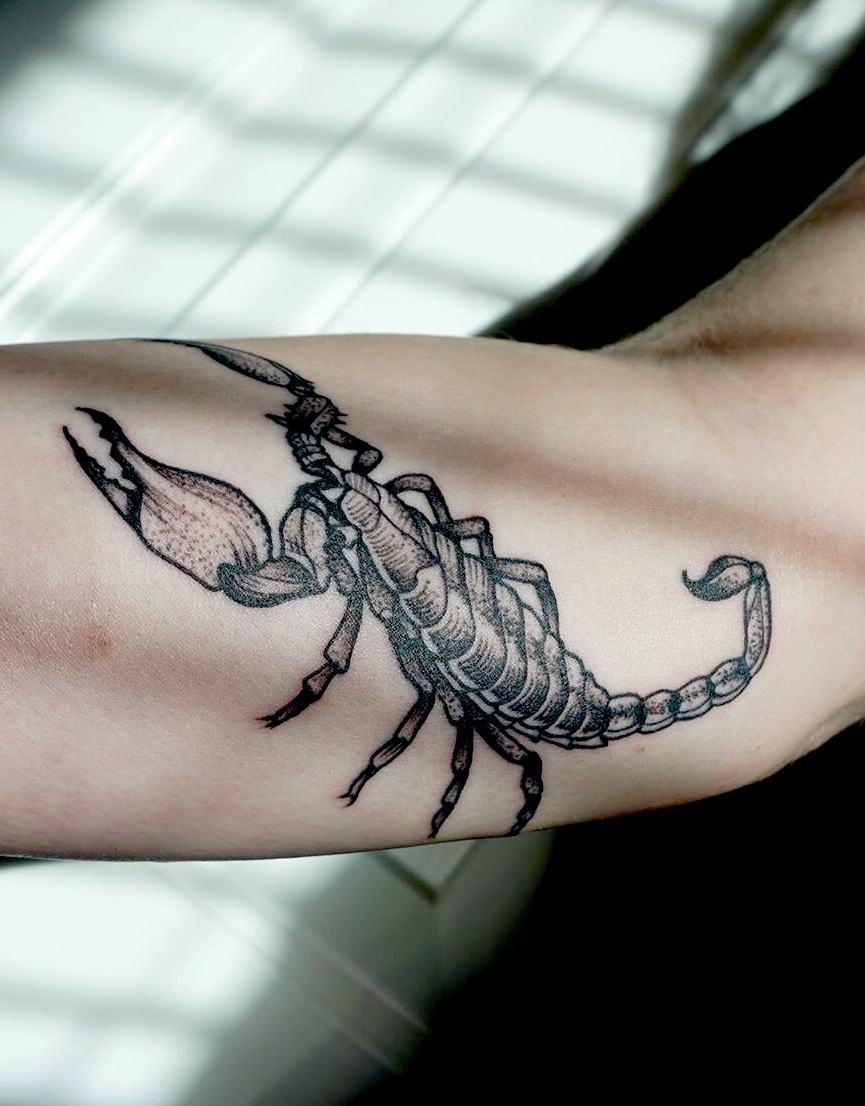 The mystery and fascination surrounding scorpions has caused different cultures around the world to give it meanings that best suit its personality or role in folklore. Although many people see this tattoo as a warning sign, the stories behind them reveal their significance.

If you’re thinking about getting a scorpion tattoo, take into account these interesting facts about scorpions before you go for it.

What do scorpions symbolize?

Ancient Mesopotamians used the symbol of the Scorpion to represent fertility and protection against evil forces. That’s possibly why they used scorpion images on amulets, talismans, and magical seals.

Many Ancient Egyptians and Greeks believed that Scorpions represented forbidden knowledge. To them, the scorpion symbolized the danger of obtaining hidden information because it stings its prey with a poisonous tail when it least expects it.

Scorpions Are Used As Talismans

Scorpions were used as talismans by many countries such as Iran, China and even in some parts of Europe. They believed that these creatures could bring good luck and protection against evil forces or protection from infections and diseases.

The Aztec culture felt really close to the Scorpio because they saw this creature as a representation of a God who had supernatural powers. That’s why they loved depicting it in their art and mythology.

Many people around the world believe that Scorpions are much stronger than snakes because they are able to survive even after being stung by one of them. This is why for centuries, Scorpions have been used as an inspiration for many proverbs, paintings, poems, and tattoos.

No wonder scorpion tattoos are considered ideal for tattoo lovers who also want to show their resilience against misfortune or harm.

Scorpions are thought to be one of the oldest known symbols of power and strength. It is not uncommon to see scorpions on display in museums and private collections of ancient artifacts. Many cultures saw the scorpion as a symbol of protection, which made it an ideal symbol for ancient warriors and hunters who desired protection from enemies and wild animals alike. This can nowadays sometimes be seen in a scorpion gang tattoo.

The scorpion is able to survive even after being stung, which made it a symbol of overcoming hardships (such as war and imprisonment) and emerging stronger on the other end. It became adopted as an ideal emblem for tribesmen who desired protection against harm on their journeys.

Historically, the scorpion has been associated with forbidden knowledge. As the scorpion was considered to be one of the only creatures who could acquire such knowledge without dying, this meaning of a scorpion tattoo can be associated with wisdom (although it’s not the only one!) and insight gained through experience.

The sting of the scorpion is often viewed as a sacrifice required for evolutionary change. A scorpion tattoo design can represent spiritual transformation and rebirth.

The scorpion has long been connected to the concept of death and resurrection. In ancient mythology, dying and rising gods such as Dionysus, Persephone, and Jesus Christ were often associated with the scorpion – as they too were believed to have experienced death and rebirth.

In ancient cultures, the scorpion was often used as a fertility symbol, making it ideal for a feminine scorpion tattoo. It was common to find images of scorpions painted or carved on the walls and doors of newly married couples’ homes in hopes that a scorpion would soon inhabit their space.

Additionally, many people throughout history have worn the scorpion as a talisman of protection and good luck.

Scorpion tattoos in Mexico, Celtic designs, and Egyptian drawings have a similarity that cannot be ignored. Ancient Mexicans depicted scorpions in their paintings with a human body and a snake’s head because they believed it to be a God of fertility, healing, and renewal. Celts considered scorpions to represent protection against evil forces, while the Egyptians respected this creature as one of the oldest sacred animals.

A scorpion tattoo’s meaning may vary from one person to another depending on the culture they come from. Ancient paintings and drawings are filled with different interpretations of how scorpions can be depicted in tattoos. This is why many tattoo lovers choose to look for their symbols and meanings before going for a scorpion tattoo design.

Scorpion tattoos are one of the most popular tattoo options because of their unique symbols and meanings. Other cultures have depicted scorpions through different images, so there’s no limit on how you can show your respect for this creature through a Scorpion tattoo design.

You can either go for something traditional or new age, you just have to be creative when choosing your next body art. For instance, you can opt for a scorpion tattoo design with colors or just black and white, you’ll look fabulous either way!

Scorpion tattoos meanings and designs can be found in many books and websites that specialize in body art so feel free to explore them before going for something specific.

The most important thing is making sure that your ink represents something you believe in. Even though the design is important, never underestimate the scorpion tattoo meaning because that’s where your inspiration will come from.

I hope this article answered the question of “What does a scorpion tattoo mean?”

Scorpion tattoos are undoubtedly among the most stylish tattoos anyone can choose to adorn their body with. Their meanings are filled with symbolism and culture which makes them even more fascinating for tattoo lovers worldwide.

There are so many scorpion tattoo ideas that you can try on your body, just remember to keep it simple – unless you want it elaborate.