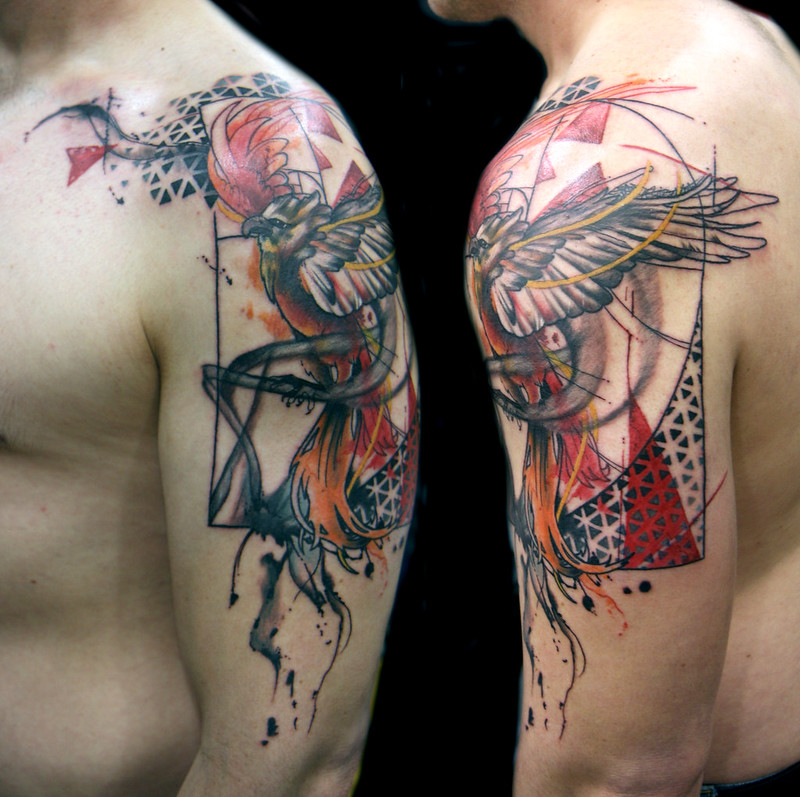 The phoenix is a mythical bird known for its colorful plumage and ability to regenerate from ashes. It has been used as a symbol of rebirth, resurrection, and immortality throughout history. As such, the phoenix is a popular choice for tattoos.

Let’s start with the beginning and understand the background of the phoenix.

The phoenix is a mythical bird from ancient Egyptian and Greek mythology. It is known for its colorful plumage and ability to regenerate from ashes – an ability that is closely linked with the concept of resurrection.

The phoenix first appears in Egyptian mythology as a heron-like bird called Bennu, which rises from ashes every morning and flies to the sun god Ra. The image of the phoenix was later adopted by ancient Greeks, who based their version on a legendary creature known as the Trochilidae or firebird.

The phoenix was an important symbol in ancient Egypt, and it continues to be a popular choice for tattoos all over the world today. The phoenix has been used as a symbol of rebirth, resurrection, and immortality throughout history. It is often associated with the sun, fire, and gold – all of which are symbols of strength, power, and abundance.

Phoenix Tattoo Meaning: What is the meaning of the phoenix tattoo?

There is no single meaning behind all phoenix tattoos; this iconic design means different things to different people. Much like the eagle, lion, and other animals that have been used as tattoo designs for centuries, the phoenix carries a range of meanings and symbolism.

Some of the most common meanings of the phoenix tattoo include:

The phoenix is also a symbol of immortality, as it is said to live for centuries. This makes it a popular choice for those who see themselves as eternal or indestructible. This is the traditional Japanese phoenix tattoo meaning.

The phoenix’s ability to regenerate from ashes also symbolizes victory over death. This phoenix tattoo meaning is a powerful message for those who have faced struggles or loss in their lives.

The phoenix has been associated with the natural world since ancient times, as it is said to live for centuries and then set itself on fire before rising from its ashes. This makes it a popular choice among those who wish to draw connections between themselves and nature, the ideal phoenix tattoo for women.

The phoenix is a powerful symbol of strength and determination. It is able to overcome great obstacles and rise from the ashes anew, representing the power of the human spirit.

The phoenix is a very versatile design, which can fit well in most tattoo settings. This iconic bird can be drawn with traditional colors (like most bird tattoos) or more modern black and gray designs. A phoenix tattoo might be realistic or stylized – though the latter tends to appear cleaner and crisper than naturalistic designs.

With its sweeping wings and fiery plumage, the phoenix can also be rendered in large or small scale. It is often associated with strength, which makes it a popular choice for bicep tattoos and other larger designs. Though generally symmetrical in appearance, the phoenix is still an unusual design that’s likely to stand out when tattooed on any part of the body.

A phoenix tattoo can be placed almost anywhere on the body. Traditionally, this design has been associated with the upper arm and shoulder, particularly in the United States. This is an ideal placement for those who wish to show off their ink.

However, the phoenix can also be tattooed on the back, ribs, chest, leg, or any other location that feels right to you and has enough space to really show it off.

No matter what your reason for getting a phoenix tattoo, this iconic design is sure to be a conversation starter. So if you’re thinking about getting inked with the phoenix, be sure to do your research and find a talented artist who can help you bring your vision to life.