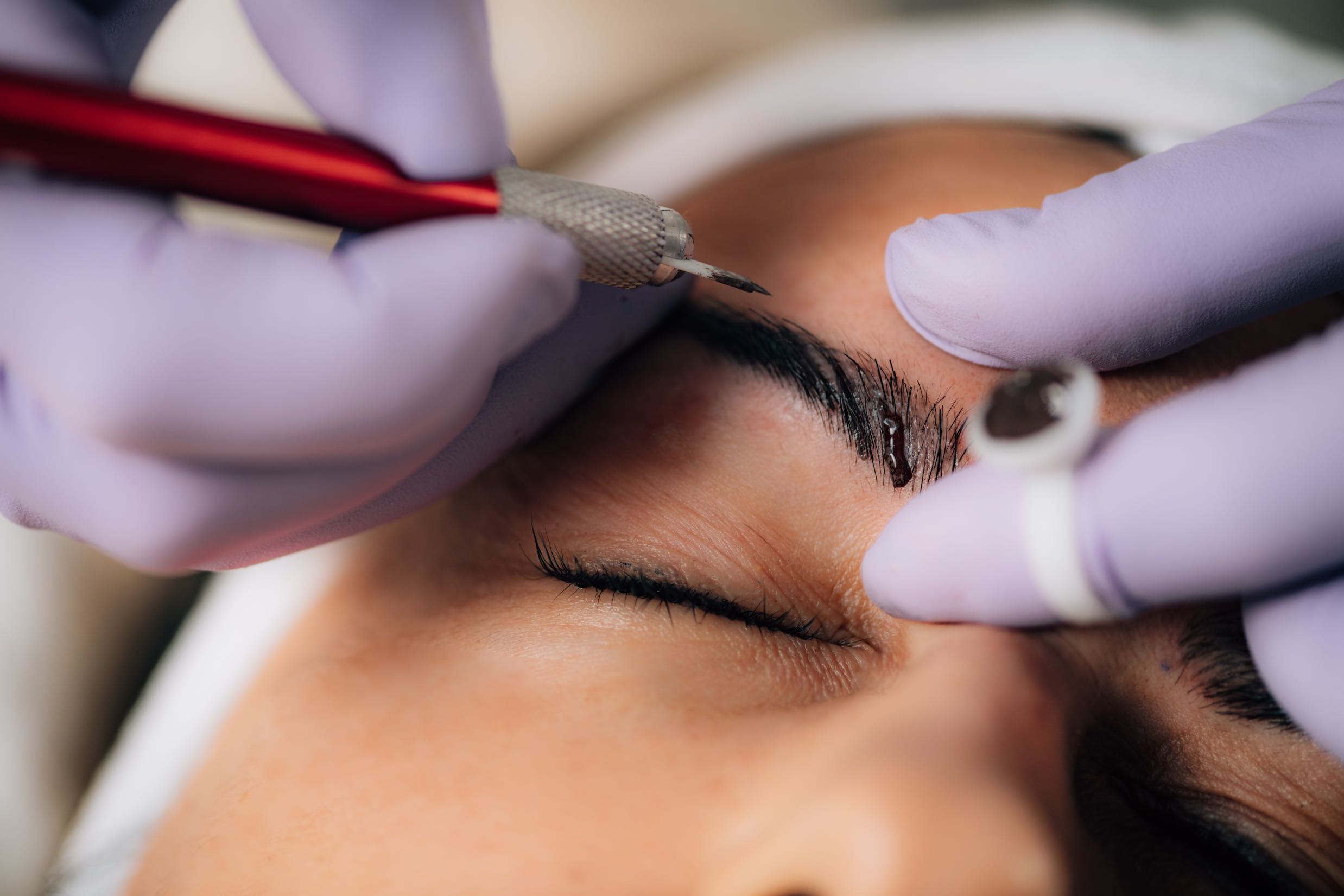 Many people think microblading and brow tattoos are the same thing but that is not 100% accurate. Although microblading also deals with shaping and thickening of the eyebrows, it’s not a permanent eyebrow tattoo—it is a cosmetic tattoo.

Now that we’ve established that they’re not the same, let’s take a deeper look at the differences.

Getting a tattoo to fill your brows out is done with a tattoo machine; needles penetrate the skin and inject the ink. This makes getting an eyebrow tattoo a permanent procedure.

Microblading, on the other hand, is a semi-permanent enhancement of a person’s eyebrows. It is drawn on by hand in numerous individual strokes which gives it a more natural appearance. Since microblading doesn’t penetrate as deep as a tattoo does, it will fade over time.

So, microblading vs tattoo are wholly different techniques using different tools and materials and each has varying permanence. The cost of these two techniques also varies greatly.

How do you choose between tattoo eyebrows and microblading? Well, you can start by weighing the pros and the cons.

Eyebrow tattooing gives you immediate, smudge-free brows after one session. You will, however, have to endure quite a lot of pain to achieve the final result. That’s not the only drawback of eyebrow tattoos. You also have to consider that the ink will change color over time and may ‘bleed’ somewhat, which can make your eyebrows appear bigger.

Unfortunately, it can look like you drew on your eyebrow with a sharpie when this happens. Keeping this in mind, it is best to go for permanent tattoo eyebrows if you only want to fill out a small section; the middle part, for example.

Microblading isn’t as painful as eyebrow tattoos but you will experience some discomfort as it requires several cuts to be made to your skin. Since microblading is semi-permanent, you have to go for a touch-up every six months.

This isn’t necessarily a bad thing as you can opt to change your brow color at this time—something that isn’t possible with permanent tattoo eyebrows. Of course, going for touch-ups every six months is a lot of expense on top of an already expensive procedure.

True, you might get some therapists who do it at the fraction of the cost other microblading therapists ask, but remember, although semi-permanent, choosing someone who isn’t qualified will leave you with wonky-looking brows for at least six months.

Let’s recap the good, the bad, and the ugly of microblading vs tattoo eyebrows.

4 Key Differences and Why You Should Care

As briefly covered above, there are distinct differences between the two procedures.

1. How Long It Lasts

The pigments used in microblading will take a few years to fully disappear. As your skin goes through its natural cycle the ink keeps rising to the surface and starts to fade.

For your brows to continue to look good, you will have to go for the microblading procedure every six months.

This gives you a kind of freedom: You can change the color of your brows or alter the shape based on the latest eyebrow trends.

Eyebrow tattoos, on the other hand, penetrate the skin deeper and are as permanent as any other ink you get on your body.

If you have any tattoos on your body, you’ll know that black doesn’t stay black—it changes to a more blue/green hue. This color change won’t happen to microbladed tattoos as the ink used is entirely different from that used to do traditional tattoos.

In fact, microblading uses a specific pigment especially made for the procedure. Even as the color fades, it will stay true to its original hues.

Eyebrow tattoos often look unnatural. Since it is applied using a traditional tattoo machine, the strokes are too ‘mechanical’ to mimic natural-looking eyebrows—it looks flat, blocky, and uniform. This can lead to the sharpie-brow mentioned earlier.

Microblading, however, is drawn with the hand and that makes a big difference. The ability to ‘blade on’ each hair individually leads to a more authentic-looking brow. A professional microblading therapist has the ability to make the filled-in areas look like a denser version of your natural brow.

There’s no doubt that an eyebrow tattoo is more painful. The level of discomfort during a microblading procedure is vastly less because therapists usually use lidocaine to numb the area. This makes microblading relatively pain-free. You’ll likely only feel minor pressure or if you have a low pain threshold, it may feel like someone is tweezing your eyebrows.

One thing microblading and tattoo eyebrows have in common is aftercare. Since your skin is being pierced or scraped, an open wound is created that will require care and time to heal. You have to treat your new eyebrows as open wounds and apply the right aftercare lotion.

Some other general care guidelines include:

Both microblading and tattoo eyebrows will take between four and six weeks to fully heal.

If you’re still unsure whether you want to go for microblading or permanent tattoo eyebrows, let’s answer some of the most frequently asked questions.

Can you microblade over tattooed eyebrows?

That is indeed possible if your eyebrow tattoo has lightened significantly. The microblading therapist just has to keep in mind that tattooed skin can change in texture and even scar somewhat, so they will need to adapt their technique slightly.

I got my eyebrows wet after microblading. What now?

This may shorten the lifespan of your microbladed eyebrows and the water will disrupt and lighten the pigment. Instead of six months, you may have to go for a touch-up sooner after getting it wet. So, take extra care to keep your microblading dry!

Can my tattoo artist do my brows?

The short answer is yes but let me put it this way: Just because they can doesn’t mean they should. Tattooing eyebrows takes a certain level of finesse and not all tattoo artists have what it takes to do eyebrow tattoos.

I suggest you find someone who is a portfolio of eyebrow tattoos you can look at before you make your final decision. The same goes for microblading therapists; make sure you check their previous work before sitting in their chair. Your eyebrows are in a very visible area and the last thing you want is for them to stand out for all the wrong reasons.

Choosing between microblading vs tattoo eyebrows is ultimately up to you. I gave you all the necessary information and now it is up to you to determine the look you’re going for and how permanent you want your eyebrows to be. Of course, the pain is also a factor you’ll have to consider.

There’s no doubt that microblading produces better, more natural results. There’s also a type of freedom that comes with choosing this technique as you can update your look every few months. That doesn’t mean tattoo eyebrows don’t have their place; some people don’t want to go for touch-ups every six months and would rather do it once and get on with life. That’s fine too.

Whichever technique you choose, please let a professional tattoo artist or microblading therapist do it for you. Your eyebrows are one of your most important and prominent facial features, so treat them as such.