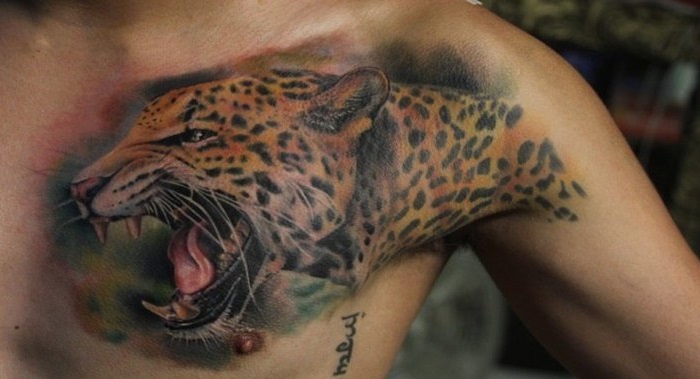 There is an interesting thing about jaguars which you probably don’t know. Although they reside and live in America, parts of the south and in the central part of it, to be precise, these beautiful animals originate from Asia.

It was discovered that they have found a way to come from Asia to America through Bering Strait. They had to travel a long way:  all through North America, and they found their home in the great jungles covering pieces of South and Central America. They have found serenity and a comfortable  home in the jungle, where not many humans reside. They just wish to be hidden from the curious eye of a hunter.

Jaguars are known for their spots, but there are jaguars without them too. Jaguars without spots are called panthers and they are also respected as jaguars. You probably didn’t know this, though it is known that all of the “wild cats” are somehow related.

The Jaguar tattoo has a deep meaning and it is mostly a symbol of strength and spirit. Jaguar is a cautious animal and he is known for his great hiding skills. He is fully revealed only during the hunt and at the last moment when his prey cannot escape anymore. This is the only time you can see him in full exposure and this is usually the time when hunters catch them.

Jaguars have great instincts and they are very powerful animals. That is why they have been respected throughout the history, especially by native people who spread legends about them. They used to think that jaguars were connected to religion and karma.

The jaguar is known for its elegance and beauty, and the bravery which is mostly coming from the fact that he is stronger and faster than most of his opponents.

All the ancient civilizations, including Mayas, Incas, and Aztecs, had a big respect towards jaguars. They made totems and made sacrifices to it, since the animal often attacked villages. Little did they know that it is a natural wish for a jaguar to eat. Luckily, they used to feed them, as mentioned, so they would satisfy their cravings.

A lot of their houses, walls and jewelry had Jaguar motif as the main motif.

Jaguars were considered as Gods in some nations and were considered to be guides for the deceased. People who believed in this were of opinion that they must always keep the jaguar spirit happy or they will be punished with misery in the Afterlife.

Even in those ancient times people tattooed jaguar spots on their bodies, to pay respect to this majestic animal. It was something that not quite a lot of people did, but those who did were very honored and loved.

The belief that an unhappy jaguar spirit brings a bad harvest, brought jaguar a new symbolism. Jaguar became the symbol of prosperity. People started to worship them even more, especially those that were always cautious of their harvest.

Mayans, however, thought of jaguars as  symbols of power and divinity.  All their festivities and celebrations included jaguar totems and only the most powerful people in the tribe would be allowed to wear jaguar pelts and paws. It was a sign of honor.

All the jaguar rooms were decorated in honor the Jaguar gods and after the official coronation ceremony, every Mayan ruler changed his name to incorporate the word “Jaguar” as a symbol of his power and divine right to rule.

Many warriors in the history of men kind had jaguar emblems as their sign of bravery and spirit which led them into great battles.

Getting a jaguar tattoo is a way to show your warrior nature which is leading you in life. The person that has it probably decided to get it in order to tell a story about their life, which may be related to birth, prosperity, strength, wisdom or danger.

The Aztecs even had an army which was called the Jaguar Knights, and they were known to be highly capable and vicious. Being one of the Jaguar soldiers was a big honor and everybody knew that it meant that the person was highly trained soldier.

Jaguar tattoos are always connected with power and strength, and this is something that is very common for the “big cats” or “wild cats”: leopards, jaguars, panthers etc.

The meaning of this tattoo can be understood as:

Secrecy – The jaguars are known for their secrecy and their way to live undiscovered and be unseen in the jungle. Getting a jaguar tattoo can give a feeling of secrecy to you, and let people think that you are a person who treasures intimacy.

Royalty – A jaguar tattoo is considered as a noble sign of a person who is different from others by its power and elegance.

Power – This is the strongest meaning of jaguar tattoo since it is considered that this is the most known jaguar characteristic. It symbolizes elegance and power at the same time.

Cunningness – Jaguars are known as good hunters and they have great skills in catching a pray. Jaguar tattoo can also have a meaning of cunning and intelectual person who knows what he/she wants and how to get it.

Beauty – When you look at a jaguar tattoo you can see the great beauty of this animal, which may be a reflection of the bearers beauty.

Elegance – A beautiful jaguar tattoo is a sign of sofistication and elegance which can be especially emphasized by putting a tattoo on the fitting place.

Strength – This jaguar tattoo meaning is connected with the meaning of power due to the fact that jaguar owes his power to his strength. This is the reason why men often choose a jaguar tattoo.

Jaguar Tattoos are mostly made in black and white, because of the beautiful spots on jaguars body.

Jaguar Tattoos are often placed on the large groups of body muscles so the tattoo would seem like moving.

It is mostly worn by men who want to show their strength and inner power.

This jaguar tattoo is one of the most common tattoo of this animal. It shows a big front side of jaguar, with head and killing paws made in strong black and white version. The stunning green eyes give this tattoo life and you get the sense that you are watched by the animal on the move.

This tattoo is made in a few different versions.

The first one is a big brown spotted jaguar made to look like he is going to jump from the back right in front of you. It covers the upper part of the back, starting from the neck.

One of other versions is the same as the one mentioned above but it is made in color. There are jungle details and a lor of green behind the jaguar, so the whole tattoo looks like a real photo from the jungle. This tattoo has to be done by a good tattoo artist, because it has a lot of details.

This tattoo is often placed at the rare side of the leg because it is made as a copy of a real jagauar totem of Mayas and Astecs so it has to go on a narrow place. Totems are tall and thin so legs are a great place for them.

Jaguar hanging on a branch tattoo

This great jaguar tattoo is often made for the front part of arms, because it gives great space for a jaguar to hang on, from a  shoulder where his head is, to the hand where his legs and tail are placed.

The 3D jaguar sleeve tattoo is an extremely lively looking tattoo which completes the whole length of the sleeve.

This great piece of art tattoo is made of the jaguar look as it was in the time of Aztecs. It has very detailed eyes and paws, and the center of the artwork arw claws which are made sharp and long.

This kind of tattoo is also connected with Aztecs. It is made of a head of an Aztec warrior, member of “Jaguar Knights”, with a jaguars head placed on his head as a kind of a headcover which distinguished them from other Aztecs. History is really magical.

Although it sounds like a skull of a jaguar is in question, it is really a human skull placed in the jaguars open jaws. It is quite a majestic tattoo which speaks about the strength of the tattoo bearer. Many people are afraid of death and this tattoo shows that you are not: you are stronger than it.