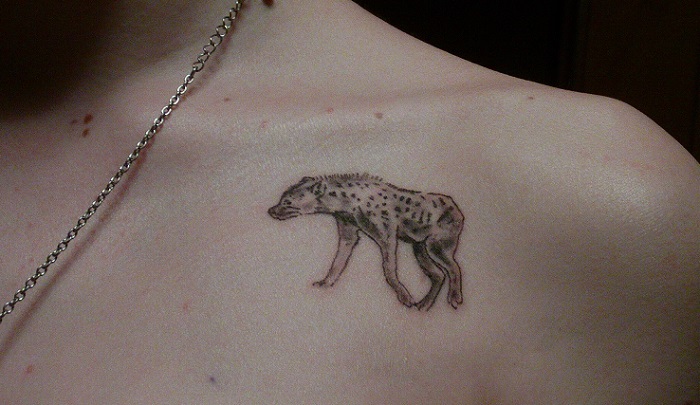 There is no doubt that tattoos may have different meanings and they usually symbolize something very important, so if you want to have a tattoo, you have to decide what your tattoo should represent.

In this text you will have the opportunity to find something more about the tattoo of a hyena. Since prehistoric times this animal was represented as something negative, because it was believed that hyenas had preyed on humans and eating them.

These and similar beliefs about hyenas exist even today. For example, in Tanzania, it is believed that if it happens that a hyena is howling in the night when someone gives birth, it means that this baby will be a thief in the future.

Although it is only a legend, people in this country don’t like to hear hyenas howling. In almost all cultures in the western parts of Africa, hyenas are considered to be very dirty animals that are communicating with witches and other evil creatures.

In the arabic world it was believed that hyenas are actually vampires who are sucking the blood of brave people. In the Christian tradition hyenas are also represented with a negative symbolism.

However, there are some parts of the world where hyena doesn’t have such negative symbolism. In the eastern parts of Africa it is believed that hyenas can create the sun and warm the Earth.

There are also many other legends and stories about hyenas, but in most of them, the symbolism of these animals is not good.

Even though this animal has almost always had a negative symbolism, there are some people who are choosing these tattoos to decorate their bodies. There is no doubt that hyenas have a very powerful meaning in the world of tattoos.

We have already said that hyenas usually have negative meanings and they are usually associated with immorality, cowardice, impurity and death.

Sometimes they may also be a symbol of catching a good opportunity and corruption. Hyenas are often associated with stupidity as well.

We have mentioned that sometimes these animals may have a positive meaning and it usually happens in some parts of India and Afghanistan. In these countries hyenas are regarded as symbols of virility, fertility and warmth.

However, most of the meanings related to hyenas are negative, so there is a question why do people choose to have these tattoos on their bodies. It is believed that these tattoos are ideal for some people who are feeling misunderstood in this world.

If you decide to have a hyena tattoo, you should be prepared for many situations when people will talk about your tattoo and they will probably have a negative opinion about it. But, you should have in mind that this tattoo should have a special meaning only for you. If you know what your tattoo is symbolizing and if its meaning suits your personality, then you don’t have to worry.

Many people believe that hyenas are hiding many good things under their surface. However, there is no doubt that these creatures deserve our attention.

Regardless of whether which design of a hyena tattoo you choose, you should know that your tattoo will be original and it will atract a lot of attention.

These tattoos are carrying a great amount of energy and also movement. If you are a playful person and if you have a high level of energy, then you should opt for a great hyena tattoo.

There are so many designs when it comes to hyena tattoos. First of all you should find a good tattoo artist and discuss with him about the tattoo that will be best for you.

Very common hyena tattoos are the tattoos with a hyena ready to catch its prey. It means that on this tattoo you can see this animal with the open mouth and sharp teeth. There is no doubt that this tattoo will attract a lot of attention.

This tattoo will be a symbol of your ferocity, impurity and something wild that exists in you. It will symbolize your wild nature. We have already said that these tattoos are common for people who are feeling misunderstood in the society. In this case the tattoo of a ferocious hyena will be a great option for you. Of course, one of the most powerful tattoos of this type is a tattoo with a sword that is going through the head and the mouth of a ferocious hyena. There is a little blood on the sword as well as in the mouth of a hyena.

As with all other animal tattoos, tribal tattoos of hyenas have always been very popular. If you don’t like many details on your tattoo and if you would like to have it in a traditional style, then we recommend you to choose a tribal hyena tattoo. You can also choose a tattoo of geometric hyena in which her face is not visible, but only the body.

If you want to have a tattoo which will certainly attract a great attention, then we have an idea for you. You can have two hyena heads on your breasts, one of them is a head of a male and the other is a head of a female hyena. They are looking to each other with their mouth open. They are both ready to attack and there is a sword between them. This tattoo has a strong symbolism and you should ask your tattoo artist for more details related to this tattoo.

There are also tattoos in which hyena is catching its prey. Sometimes you may choose a tattoo with a couple of hyenas and its symbolism will be even stronger.

Another interesting design for this tattoo is a laughing hyena. In this case hyena can have a positive symbolism. If you are a playful person who loves laughing, you should choose this tattoo, which represents a total contrast to the usual nature of hyenas. But, you should have in mind that laughing on your tattoo doesn’t have a positive symbolism always.

Sometimes it may be ironic laughing. A hyena may be laughing because she will catch its prey very soon. There are so many meanings that can be related to the laughing hyena tattoo.

As we have already said, you can have a hyena tattoo done in black color only, but you can also choose different colors to represent this animal more realistic. The colors that are usually used for these tattoos are brown, green, red and yellow. The eyes of a hyena may be done in red, yellow or maybe blue color.

Of course, it is important on which part of your body you want to have a hyena tattoo. You can wear it on your arm, leg, on your back or maybe on your stomach. There are people who are wearing hyena tattoos on their wrists and hands as well.

These are some of the most common hyena tattoos. You have seen that most of them are representing a wild side of a hyena and her ferociousness. Hyena with her sharp teeth which is ready to attack and scavenge someone is one of the most popular hyena tattoos. In most tattoos hyena looks like a devil.

This animal is a symbol of immorality, ferocious nature and death. However, we have also mentioned that there is a tattoo of a laughing hyena as well.

We hope this article helped you understand better the meaning of hyena tattoos and their symbolism. Also, we hope that you have found some designs that could be a great choice for your new tattoo.