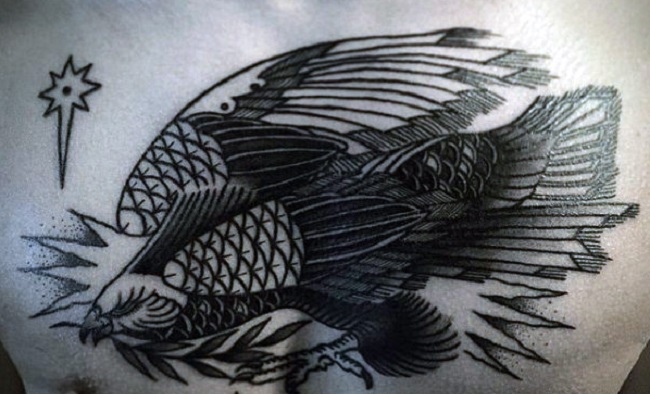 When we think of a hawk, we think of honor. This majestic bird goes high in the sky and represents everything people cherish: freedom, power and energy.

Although many people think that hawks look at other animals in a patronising way, this isn’t true: they only do that when searching for prey, they are very calculated.

Getting a hawk tattoo is a great way to show your power and to get respect.

Hawks are known for their great eyesight and their impressive perception.

They are known to be intelligent and this can be seen with their great hunting skills. They have a very developed sense of space and therefore can be interpreted by many other people as creative too.

Their hunting skills have been recognized by men very early, so the hawk became a great help to men in hunting. It can never be fully tamed, though, so you have to be very careful with the things you do around it.

Hawks have a great connection with humans and have been a part of our legends for hundreds of years.

People believe that birds are as emotional as we are because of their wish to always be free, and that that’s the reason why we are so connected.

They were considered to be the soul guardians of the dead. You can see why some people get creepy tattoos of hawks, too.

This fact can be an inspiration to many black and white adaptation of hawks, but we will talk a bit more about this later.

Native Americans thought of them as an incarnation of their ancestors who passed away so they respected them a lot. Nobody was allowed to touch them, hurt them or believe in the fact that they bring bad luck. 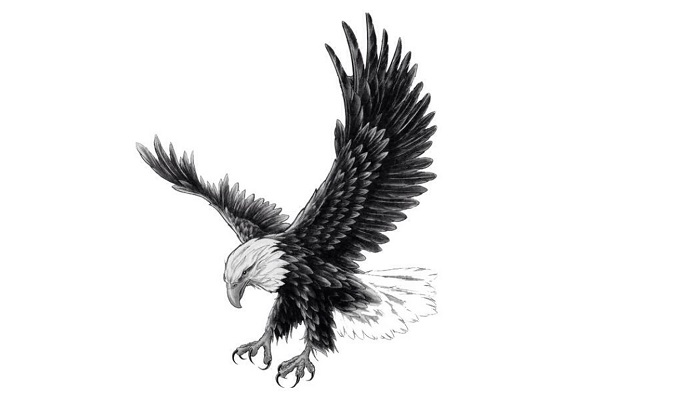 The hawk is also greatly respected for its fighting spirit so the Native Americans believed that it was a great warrior symbol and that the spirit of the hawk they worshiped will give them better warrior skills and make them greater warriors.

That is why the hawks are sometimes considered as the symbols of war.

The hawk and his spirit are related to great virtues so getting a hawk tattoo can be a great way for you to show that you are also honorable and noble.

The meanings of Horse tattoos

Hawks have many traits related to them, and most of them are positive:

Courage – one of the top hawk traits shows its unstoppable heart which can overcome pain and tireness in order to succeed in the things one wishes to do.

Honor – hawks respect each other and wouldn’t do anything to lose their honor. They are always a bit above other animals, if not psychologically, then physically.

Nobility – one could say that a hawk is a really special animal when it comes to this trait. Although you have probably seen a lot of facts about their way of treating other animals, you may not know that a hawk actually never kills an animal which has a lot of children nearby.

Energy and Passion – they are very energetic and have strength to do anything they need to. They do it with great passion and are known for not giving up. They are one of the rare animals that can actually fly for a very long time without getting exhausted.

Intellect and Cunning – they always make a plan about the way that they are going to trick their prey. They never go into anything blind, without any direction, and this is something that a lot of people would assume, but don’t really believe.

War – even though a hawk can have many positive traits, one of the most famous things people know about hawks is that they are great hunters and very precise killers. They don’t have to think a lot about this since they have a natural instinct that helps them.

Hawks tattoos are a great way to show your power and strength. That is why a lot of artists depict this bird in flight and place it on strong muscles of men: on biceps. That is because it gives a more dramatic look.

The most popular bird tattoos are the eagle, the hawk and the raven. Obviously, all of them have a symbolic meaning to the person that has the tattoo: especially if the person is somehow connected with a memory in their life that features this bird.

After them come the falcon and the sparrow. They are less popular, but many people still get these tattoos.

The hawk is one of the fastest hunters on the globe. The hawk can rise hundreds of feet in the sky, see his pray down on the ground and use their sharp eyesight and great perception, and go down in just a few seconds, catching his prey without prey even noticing what is happening.

This is why a lot of men and women choose hawk as their tattoo image. They are thrilled with its power and the strength and his killer instincts.

In ancient history he was considered as the guardian of the souls of deceased men and women, especially during the time of ancient Egypt. This is the reason why, during the early years, no one was allowed to hunt them and it was considered to be disrespectful if you did this.

Native Americans always had a special respect to the hawk and it was honored very much and had a high status in tribal totems. In many remains of native people’s things we can see that they loved hawks: they sometimes even engraved their faces as lucky charms.

The hawk tattoo is often made with a family shield behind him or with colorful feathers which draw attention to the tattoo. This depends on what portion of the hawk’s character do you want to portray.

Some tattoos are made with a hawk flying and surrounded with moon and stars in the sky.

This is more of a dreamer tattoo and is great for those who are very creative and want to show off their talent.

Hawk tattoo looks great as a full back tattoo which looks amazing or you can have a smaller tattoo on your ankle or neck and it still looks great.

This tattoo is extraordinary and leaves no room for anything than to admire this gorgeous image. You have to be very brave to get this because it takes multiple sessions to get this piece done.

It is made as a flying hawk with his wings spread all over the bearer’s back and every feather seems to be alive. Hawks majestic eyes focuse on the person who is looking at the tattoo.

The claws are detailed to the maximum leaving no question about the strength and the killer instinct of this hawk. It’s for those who are very determined and men often want to show off their masculinity with this tattoo.

Hawk with his Prey Tattoo

This interesting tattoo shows the image of a big hawk carrying his prey in his claws. Most of the time is some kind of reptile we’re speaking about, but sometimes people put a very specific animals in the claws of a hawk: depending on the message they want to send.

Sometimes it isn’t even a proportional image and a hawk can carry an elephant as a sign of unexpected, remarkable strength.

It can be made in black and in color, but even when the hawk is black, the prey is always in color to distinguish itself from the hawk or vice versa. It seems like women like the coloured in tattoos much more than men do.

This is also a very popular hawk tattoo and is mostly placed on the underarm all the way from the elbow to the hand. It can be made in various sizes, depending on what message you want to send to the person seeing it.

It can be made in black but since it is only representing one feather it is mostly in brown, grey and similar colors. You can also make a rainbow feather and it is common for women to get this done because it looks more alive.

Hawks feather tattoo symbolizes protection and strength and so anyone that wants to remind themselves of the long way they passed can get this tattoo.

This kind of tattoo is very popular because of the great colors the feather is made of. It combines red and brown.

It is interesting to have this tattoo since this bird is legally protected in many states.

These hawk tattoos are beautiful because of the way they are made. They are made in black, sometimes brown and show the apstract strength of a hawk.

Through history, the hawks were considered as very spiritual animals so they were always connectex to tribal art.

This admirable tattoo is similar to the full back tattoo but is even more prominent due to the place where it is tattooed on. Again, this one takes up a bit more space and you will need to go to a few sessions to get it finished, so you need to be strong and have a high tolerance for pain.

The chests are a great canvas for this tattoo because there is enough room to spread the hawk’s wings and to make a big balanced hawk tattoo.

This looks especiallly good on men because they have flat chests and the hawk can be displayed very nicely. Women make this tattoo on their back more than on their chests, but it depends on the woman. It is especially popular for those who had a mastectomy to do this, as a sign of strength.

This tattoo has a great meaning to the bearers. It is made as a hawk with a family coat of arms as a part of his body.

Sometime it contains a family name or some significant numbers.

This tattoo is connected with the Mason and Pagan hawk symbolism. In eastern countries, it is connected to a special feeling of awareness and being awake, seeing things the way they truly are.

It contains some kind of triangle or a pentagram with a third eye in it, while two hawks warch over it, one from each side.

The hawks on this tattoo are identical, one is a  mirror image of another. It has a secret meaning to anymore that gets it.

Watercolor hawk tattoo is a great tattoo for its bearer, especially ladies because it represents a softer version of the powerful hawk.

It is made in just a few colors, brown, red and green are the main ones.