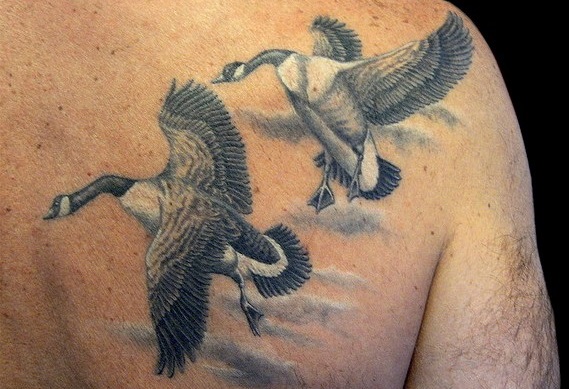 Unlike architecture, sculpture, painting and other forms of expression, tattooing is difficult to pin to a certain date of creation because there are few archaeological remains of it. Tattoos live and die together with their wearers, while tattoo tools are very rarely found and recognized in their original purpose because of their miniature and disassembly.

Also, the official archeology does not recognize the ornamental surface decoration of sculptures from pre-historic cultures as a tattoo representation. The reason for such behavior is probably the fact that most of the recognized archaeologists grow up in dominant, petty-bourgeois cultures, who are ashamed of their barbaric origins and therefore negate them. That is the reason for the misconception that tattooing from wild tribes comes from exotic jungle destinations.

The fact is that tattooing, along with many other customs that modern civilization abhorred, was very much developed among our pre-Christian great-grandparents. Charles Darwin wrote back then: “There is no nation on this planet that does not know this phenomenon. ”.

The oldest archaeological traces about tattooing are about 12 000 years old. These are already mentioned sculptures with tattoos. The first undeniable proof is the ice mummy of the tattoos named “OTZI”, found in the Alps between Austria and Italy, about 5400 years old. This is followed by a whole series of recent ice mummies found in burial chambers in Russian steppes, tattooed mummies from Egypt and portrayals of Greek, Roman and Egyptian chroniclers. It is not possible to pinpoint the beginning of tattooing because it has developed independently in every corner of the world.

More recently, many “scientific” works have been written that explicitly described tattooing as a phenomenon in certain tribes, religious and subculture groups. It is very often implicated that it is the result of deviant, amoral and antisocial behavior, or even mental lability. Experts who support such theses are based their theory on earlier work by psychiatrists from major European powers who were used to justify their colonial policies.

They portrayed natives in the colonies as deranged barbarians who were unable to lead their own land and therefore needed mentally superior Europeans as saviors and rulers. Freethinking dissidents who dared to think or look different were also declared dangerous barbarians and eccentrics in totalitarian politics, so they could be arrested and silenced more easily. Interesting is the fact that research supporting these theses was conducted in prisons and asylums of the nineteenth century, and so it is very clear that all those interviewed were crazy and criminals.

Any opinion that tattoos are the mark of high society rank, the nobility and different high achievements, was systematically omitted and concealed, which is why today wrong opinions about tattooing exist.

Konrad Lorenz, a doctor of veterinary medicine, a zoologist, ornithologist, is the founder of ethology as a science derived from comparative scientific observation of the behavior of humans and animals. He explored the wild goose in their natural surroundings and found that the similarity with some human behavior is astounding.

Wild geese are strictly monogamous animals, very often the marriage lasts for 50 years, and only two years less than their life. The first year is very often “in love” and “faith.” A young wild goose listens to a young wild male geese who passionately falls in love with her overnight. They always “go” together.

Only the second spring they “marry”, build a nest and enter into sexual intercourse. When the young are born, they lead, store and feed them together until the autumn, and sometimes until the next spring. Then they are completely devoted to building nests and new generations, and last year’s gooseberry, but adults, go their own way.

The sadness for the lost “spouse” is pure and dramatic. A male or a female looking for a lost partner for days and nights, constantly calling for it. If he died, lost or was killed, which sometimes also happens, the sadness lasts for a long time, and the wrinkles around the eyes of the anxious show an experienced observer shock and sometimes incurable sorrow. Some “widows” are impotent and will not “re-marry.”

Professor Konrad Lorenz believes that sexual intercourse with wild geese is not in the foreground, but based on love and friendship. He concludes this from the fact that there are lifelong friendships between the two males. These inseparable friends are constantly singing their “triumphal shouts” tune, especially when they battled with others and when their friend won.

Sometimes such a pair joins a female, and usually takes a long time until one of them gets it. Sometimes all three remain together and they form the “marriage” of the three.

Geese are symbols of joy, partnership, community, loyalty, parenthood and movement. They also symbolize marital fidelity which is the reason why they are a great option for everyone who wants to get a tattoo devoted to someone they love.

Goose tattoo might not be as popular as tattoos of falcons or other birds, but many people aren’t familiar with the symbolical meaning behind this amazing bird. In recent years, goose tattoos started becoming more and more popular and people started recognizing the symbolical value of this amazing bird. When choosing a goose tattoo it is important to first think of the symbolical meaning you want to represent with the tattoo. Whether it is marital fidelity or simply parenthood, the design of the tattoo should reflect that desire.

Goose tattoos are usually one in a way that they are represented in a pair, so two geese in flight or on the ground. When doing a pair of geese, this tattoo is going to perfectly represent the symbolical importance of geese and what they actually represent. Choose a spot where your design is going to truly stand out and catch the eye of the people looking at you.

Goose tattoo can be perfectly done in smaller size or in larger size, so it is up to you to choose which one is the one you want.

Geese might not sound as powerful as perhaps an eagle tattoo, but this doesn’t mean that this beautiful bird is not important in symbolical sense. Geese symbolize love, affection, fidelity and parenthood, which is why they are great ways to devote the love you are feeling to your closest people. Geese tattoos can be done in smaller and bigger sizes, an in both cases they can be represented realistically and abstract.

Either way, consult your tattoo artist and try to find the perfect design for your tattoo and one that is going to perfectly represent everything you want to show. Geese are a beautiful bird and the amount of symbolism behind it is definitely going to make your tattoo stand out.