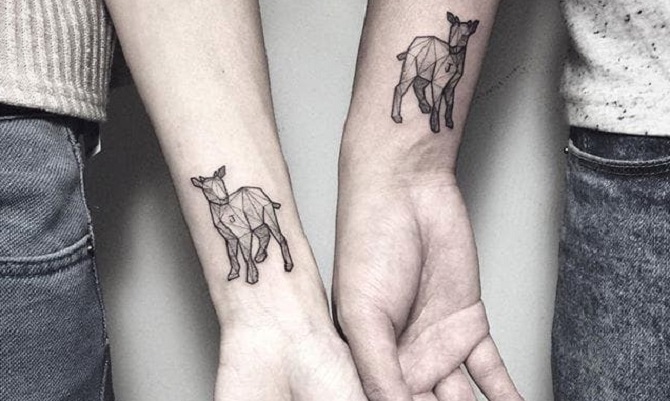 The goat is a very special animal that can be looked upon from many different angles: some peopple feel like they are a blessing, something that keeps people in rural places alive and wealthy, while some people find them intimidating and therefore don’t think they are a sign of good luck.

The goat has been a sign of life and prosperity in many ancient cultures, but has also been a sign related to satan.

Many cultures used to have a special relationship to this animal and that’s why it is very popular nowadays to make tattoos about it, especially if you’re connected to any of those nations.

Goats have been precious to mankind from the early days. It was one of the first domesticated animals, humans realized how precious goats are: they give meat and milk and are not hard to feed.

That’s why a goat was very close to the human: they lived in the same parcel, sometimes even in the same house.

Nordic legends, which were always connected with animals, say that the god Thor had his chariots pulled by goats while he flew through the sky. This shows that a goat can also be very strong, a sign or prosperity.

The legend also said that the same god Thor ate his goats before going to bed every night.

The same goats reincarnated the next morning. It’s a very interesting legend which speaks about the close connection between a goat and a god.

In Greek mythology, the god of wilderness, Pan, was half-man half -goat. Pan is one of the reasons why goats are connected with fertility: Pan was half goat and was known as a very lustful creature. This idea stayed interesting throughout the years.

After some time, the goat began to be related with some occult elements. It wasn’t so popular at the beginning, but as the number of the cults grew, it became more and more known that goats can also be a sign of something bad.

Some of these occult elements are roses from the legend of god Baphomet, who was also half goat. In the past, this God was related to Templars Knights who were suspected of worshiping this God and it brought more attention to Baphomet than needed. 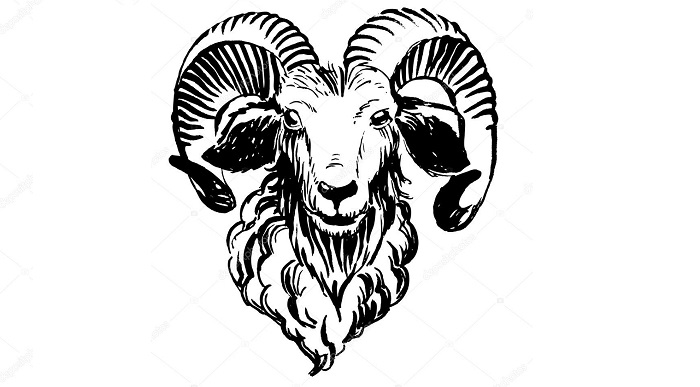 The legend about this god spread very fast.

This legend and its connection to Templars made the goat tattoo with pentagrams very popular. However, not a lot of people decide to get this one done because it is usually connected with many bad things, especially nowadays.

Judaism, an ancient religion, had the scapegoat as a very powerful symbol. It was considered to be a way to take away the sins by sacrifice. The scapegoat became a widespread term and the tattoo with Jewish symbols became more spread.

This term “scapegoat” is not first used by jews but by Babylonians and the Jews picked it up. However, this is also a part of their culture they don’t speak much about for it is sort of weird and creepy too.

It was a tradition to let the goat (scapegoat) “escape” from the village in order to carry out all the sins of the villagers. They used to do this once a year and it was supposed to bring the whole village luck for the next, upcoming one.

For habitants of India, the billy goat became the symbol of the fire, from which a new life is born, so the goat has a very special meaning for them. We all know that people from India have a really special connection with a lot of animals, this may also be one of them.

Goat tattoo can also be understood as a symbol of ones ambition. It comes from the fact that goats love to climb and they do it because they are stubborn,  they pass the trip no matter the problems they encounter.

Goats are also animals known for their curiosity and the fact that they are very nosy. Some of the known facts involving goats are: goats chew everything to see if it is eatable; goats have no problem with walking up to strangers and starting some kind of interaction.

Many people actually fear goats because of the fact that they can sometimes be intrusive.

Since goats can be interpreted in a lot of different variations, there are many different goat tattoos. Depending on who you are and what your connection to this animal is, you can get various styles done too.

As mentioned, it can be interpreted in many ways, but it has to have a meaning to the bearer of the tattoo. This is not a kind of tattoo you put without meaning or you put because it is beautiful.

Since goats are included in many human legends, it is obvious that it was precious to people.

Some civilizations even worshiped it and those who are from the mentioned civilizations get these tattoos done in order to pay respect to their ancestors.

The meaning of goat tattoos

That is why goats can have so much symbolism attached to it! Let’s check out some of the things goats can be connected with:

Curiosity – they are known for their fearless curiosity and they will come just a few centimeters away from something they find interesting, not being scared of it at all. If you are also always looking for and adventure, never afraid of new things, you might want to check this out.

Intelligence – goats are pretty smart animals, little did you know. They have a great sense for what’s going on around them and they let no one interupt them.

Ambition – their fearless climbing to heights where humans get dizzy approves the connection between goats and ambition. To be honest, most people don’t see goats as ambitious animals, but they don’t think about the fact that goats live in mountain areas where life is a bit hard.

Virility and Fertility – it is connected with the god Pan who was half-goat and was very lustful.

Playfulness – if you’ve ever read Heidi, you know a lot about this. If you didn’t, we’ll just let you know that goats can be really fun to play with since they can be stubborn and they love to win!

Wealth – since goats give milk and meat, but goat cheese can be also made from the milk, the goat has been seen as something that feeds and lets people live a prosperous life.

Goat tattoos can be found in many different variations: from cartoonish to skull tattoos. It is all up to you to decide which one you want. A lot of goat tattoos tend to be comical and a lot of them are oriented on Paganic symbolism.

This is the fun portion of goat tattoos and it makes the image of goat look non-threatening and fun. If you have a special connection with goats from, perhaps, your childhood, maybe you would like this one.

It can be tattooed anywhere you like it, but you must be aware that some places are not too great for this animal tattoo. That’s why people mostly choose small goat tattoos.

These are often called Billy Goat Tattoos because of the funny and playful side of them. It is chosen by people who are positive and love to jerk around, and is a way to never grow up.

This kind of tattoo is related to all the cults connected to the goat, from the past and today.

The goat with the third eye represents a legendary god named Baphomet. This is connected to the fact that the third eye senses more than our natural senses do, it’s almost magical.

The goat tattoo is therefore connected to the satanic meanings which come from legends in the past. People who have this tattoo are interested in the different kind of arts called the dark arts, sometimes even participate in those.

This tattoo is actually a tattoo of Capricorn, one of the Zodiac signs in astrology. It is a good choice for people born under this sign to get it, or those who have a special connection to someone who was born in this specific month.

It is related to a legend of the Greek god named Pan who jumped into the Nile after fighting Typhon, who was a scary sea monster back then. Pan’s part of the body which was under water turned to a fish tail, and the rest stayed in the form of the goat as it was before.

Many people who grew up in the nature, maybe in mountain areas, have a special connection with this tattoo. If you’re one of them, you must know what a great feeling it was to be free and away from the modern world. This tattoo shows simplicity, love and peace.

If you didn’t connect this tattoo with your childhood, in your mind this meaning may be different and that is totally okay. The most important thing is that you know what it means to you.

Some people believe that this tattoo brings luck and that you’ll have a happy life if you have a free, ambitious, quirky goat laying or playing around in nature.

However, this will come true only if you believe in goats, their meaning and their famous history.