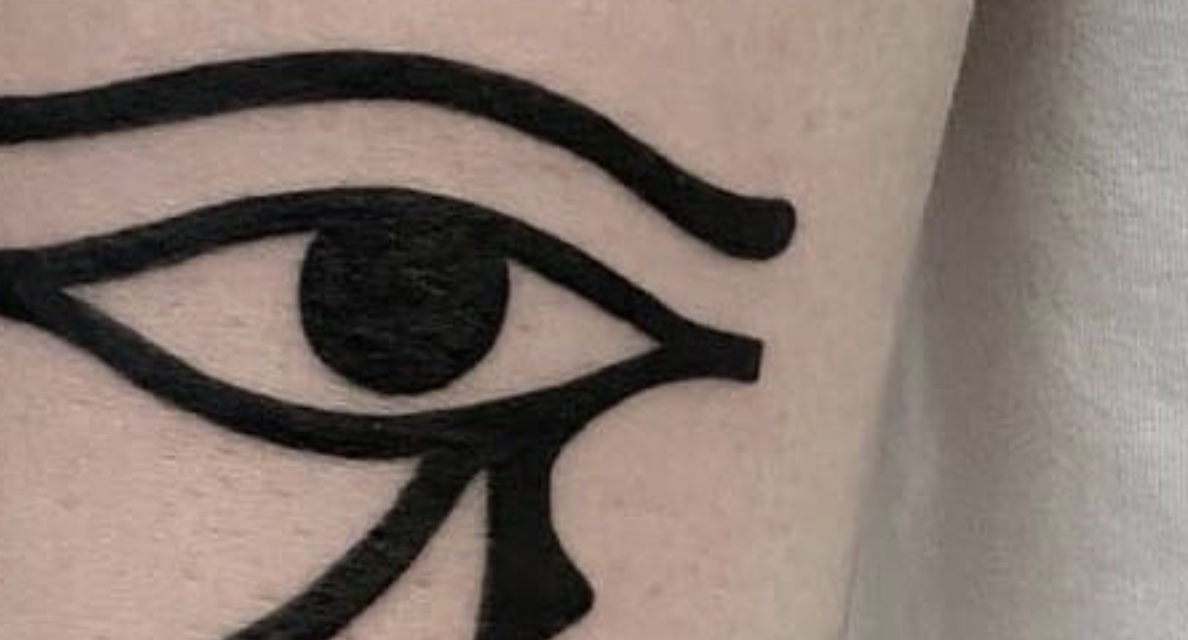 You’ve no doubt seen the Eye of Horus at some point in time if you watched a movie set in Ancient Egypt. This symbol has been around for centuries and many people have decided to get a tattoo of it.

In this article, we share with you all you need to know about the meaning of an Eye of Horus tattoo.

If you don’t understand the meaning of the Eye of Horus, you may not understand the true power of this symbol and why it has adorned human bodies for centuries in some way or another.

There is some controversy around getting the Eye of Horus tattooed on you. It centers around using sacred and esoteric symbols without knowing the meaning behind them.

There are some who believe that such images carry power and if you get a tattoo of one of these symbols without understanding it, you may be aligning yourself with a type of energy you don’t actually want to attract.

There’s also some frustration coming from people who actually understand the meaning of the Eye of Horus symbol when they see someone just getting it because it “looks cool.” There’s a sense of reverence and respect that is lacking in this regard and this may anger some people.

In other words, when someone asks you if you know the meaning behind the Eye of Horus, it’s best to know the answer. Take the time to study Egyptian culture and their beliefs before committing to getting such a powerful image as a tattoo. Well, we suppose that is exactly what you’re doing by reading this article, right?

So, let’s educate you on the Eye of Horus for you to make an informed decision.

The symbolism behind the Eye of Horus is somewhat tricky and perplexing. That is because the image as a whole is actually a mixture of different elements and significance.

Ultimately, the symbol is a mixture of different meanings tied up in one element: the Eye of Horus. In a nutshell, the Eye of Horus, also known as the Eye of Ra, exemplifies health, knowledge, and power.

It is also believed to be a symbol of protection for whoever wears it. No wonder sailors painted the symbol on their ships before setting sail—they believed it would keep them safe from the sea and pirates.

Let’s look at the different parts so that we can understand the whole a little better.

The Eye of Horus also goes by wedjat eye or udjat eye. It is the symbol of the Egyptian god Horus; one of the oldest among the Egyptian gods. The sun illuminates everything, which was then shown to the god Horus—making him the all-seeing one. This means the eye and the sun are synonymous in this symbol.

There’s also the fact that the eyes are considered the window to the soul. In the same way, the Eye of Horus is a gateway to everything that is mysterious and unseen in both life and death. The eye is also open and shines a light on the path forward, leading the soul on its journey.

There is more than one explanation of the teardrop in the Eye of Horus symbol. It is believed that when Horus and Set were fighting over Osiris’s throne, Set ripped out Horus’s eye which left behind a tear mark after Thoth restored the eye.

There’s also a theory that the mark is similar to that around the eye of a peregrine falcon. This makes sense since Horus considered the falcon as a sacred animal. The falcon is also associated with the sun and is considered just as all-seeing from high up in the sky. The Eye of Horus is said to make it possible for anyone who wears it to see beyond what mere mortals see.

Horus revered another animal: the serpent. He was especially fond of Ureaus, a fire-spitting snake who protected the god and all of Egypt.

Ureaus is a female serpent and is often associated with a cobra—a snake with the power to control life and death.

Since the spiral extends from the Eye of Horus, it may also be symbolic of an increase in consciousness after passing on. The Egyptians see the spiral as a symbol of life/death, growth/recession, and expansion/contraction. It represents the cycle of life and its continuity. For Egyptians, death is only another curve in the spiral, which signifies a new cycle of life.

Here are a few words associated with the Eye of Horus tattoo:

The Eye of Horus is usually drawn in thick, black lines with a particular focus on symmetry. The tattoo artist should pay particular attention to the shape of the eye: it should have an almond shape with perfect dimension to pay tribute to the incredible skill of the Egyptians. The eyebrow, curling line beneath and teardrop should be created with mathematical perfection.

Although the eye can be rendered in many different ways, the above should be the foundation to build from. You can also decide to combine the Eye of Horus with other symbols.

For example, adding wings or feathers to the design puts more emphasis on the falcon than on Horus. You can also place the eye at the point of a pyramid to emphasize that it is a symbol of protection.

If you’re not a fan of doing things the traditional way with thick black lines, much like they would using kohl—ancient eye makeup—you can add some color to the eye. This often makes the Eye of Horus tattoo stand out more.

People often choose to use a falcon’s actual eye color as an homage to the falcon symbol that forms part of the Eye of Horus. Other times, people opt for green or blue eyes as they appear brighter and will make the tattoo more visually appealing.

It’s possible to make the Eye of Horus tattoo really stand out. You don’t have to go big to make a statement, instead, you can go the realistic route. Your tattoo artist can use more shading to make the eye stand out by differentiating it from the rest of the symbol.

Although the Eye of Horus tattoo is fairly easy to do, adding a touch of realism makes it more challenging so you should make sure your tattoo artist is confident that they’ll be able to do it up to your standards.

We suggest you look for design ideas on the internet so that you have a visual representation of exactly what you want. They’ll then be able to tell you if they can do it or not.

Placement of Eye of Horus Tattoo

There are no real limits to where you can put your Eye of Horus tattoo. If you want it large, you can place it on the inside of your bicep, or the outside. If you want to go smaller, your wrist or ankle are good options.

Why not behind your ear or in your neck? The possibilities are endless. The Eye of Horus is a classic tattoo that is fairly simple to do, which makes it an easy, yet stylish piece of body art.

The Eye of Horus symbol has a lot of powerful meanings behind it. As with any symbol, if you see and think it will make a pretty tattoo, first do some research. Sometimes a pretty image may have a meaning that you don’t agree with and then you’ll be stuck with it for life.

If you know the meaning of the Eye of Horus tattoo and you feel it is something you really want to get, you then have to decide on the placement and design.

Although the basic elements of the Eye of Horus need to be there, you can add other symbols, use color, or make it more realistic. When it comes to placement, your whole body is a suitable canvas, so it is up to you if you want it visible for all to see, or somewhere tucked away where it is your personal reminder of its meaning.

As always, make sure you go to a professional tattoo artist who can deliver the kind of work you want. You don’t want to walk out of there with a botched Eye of Horus tattoo just because you didn’t do your research beforehand.