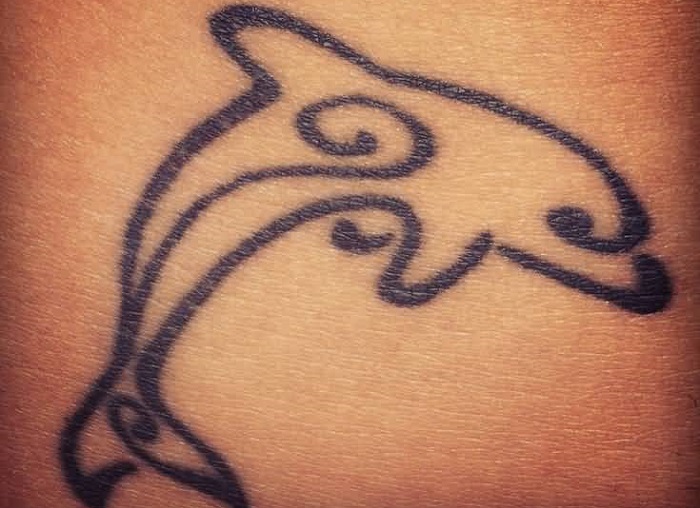 Dolphins are one of the most elegant animals in the world. They are extremely intelligent, which can be seen when they are trained. They are mammals, just like us, and their talents are numerous.

There are a lot of legends about dolphins and the most common ones are with dolphins as the brave animals willing to help in times of jeopardy.

Sailors and men at sea often meet dolphins swimming near their boats and all of those encounters are filled with joy. This motive has been made into movies many times.

The ancient Greeks were especially thrilled with dolphins and always thought of them as a good sign. If your ship was acompanied with dolphins it was considered that your trip will be good and safe.

Another legend spoke about dolphins as animals close to sea nymphs and that their presence was a message from them. However, this is something that not a lot of people believe to be true.

It takes only one encounter to become a big fan of dolphins. They are extremely social and joyful, also very well connected to each other. They can feel the other dolphin’s presence and they form bonds really quick and easy, just like humans.

Ancient Greeks respected dolphins because of their intelligence and they have considered them to be in connection with a god named Apollo.

The dolphins were considered “Kings of the Sea” and had all the royal traits like strength, beauty and authority. The dolphins were legendary for their sensitivity and were known as a carrier of souls. They are a vulnerable animal because they get emotionally attached to people too.

One of the most essential things to know about dolphins is that they are very playful. This makes them a very good companion and people love to have them tattoo’d on their body because it makes them feel like they are not alone.

Their nature is also very compassionate. They are highly bonded amongst each other and the pack is always there to protect the members. This makes them unique water animals.

Dolphins are especially protective about the pregnant members of the stack and they will defend her with their lives. This shows how very well connected they are and how they even have a hierarchy in the emotional lives they live, which is pretty fascinating, but not weird: they have high IQs for animals.

Dolphins are beautiful creatures and dolphin tattoo symbolizes their character:

Playfulness – Dolphins love to play and are in a very cheerful mood most of the time. They can be a great friend and this can be seen in various movies.

Free-spirited –  The dolphin tattoo can also show the person’s free spirit. The dolphins cherrish their freedom and love the open space of he sea. They don’t tend to stay at one place for a long time, except when one of the dolphins in the family is hurt and the others are staying near him to take care of him.

Intelligence – Dolphins are one of the most intelligent animals on the planet. It is known that they have a great memory so if you get this tattoo it can have this meaning for you.

Harmony – Since dolphins live in harmony and love to bond, a dolphin tattoo can show your feelings about the necessity of having harmony in life or showing that you have reached it.

Gracefulness – Dolphin tattoo is graceful in any design because these creatures always swim and move gracefully.

Community and Family – A dolphin tattoo can be your way to show how much you appreciate your loved ones and to show the world how family is very important.

Protection – Dolphins are very protective about the pack members. Let your tattoo show how you feel the same about it. They have feelings really similar to the human ones, you can see that if you look into a bit of research on them.

Women mostly have dolphin tattoos, but there are some men who respect the free spirit of dolphins and who love the sea, so they have tattooed dolphins too. Surfers for example. They think of themselves free of boundries just like the dolphins.

Tribal tattoo symbolizes the human bond with nature or with the closest people you have, your loved ones. Tribal dolphin tattoo has a very deep meaning of bonding with the ocean and the world beneath the surface as well, so this tattoo is mostly for people that feel a connection with people and things around them. They sort of radiate awareness.

A lot of these tribal tattoos are actually symbols of unbreakable and strong bonds between the members of the family.

Polynesian people seem to have a  special bond with dolphins which started hundreds of years ago. That is why the Polynesian culture has many dolphin designs and several different tattoo designs with dolphins included.

All Celtic tattoos are strongly connected to paganism and legends. The Celtic Dolphin tattoo shows great connection to nature and the harmony which keeps nature alive and in growth.

Celtic dolphin tattoo are most commonly made in black ink and some of Celtic symbols are added to them, mostly in the area between the body and the tail. It is all up to you to make this tattoo a bit more personal, though.

The usage of Celtic knots or loops is very often and the dolphin is shaded blue to give it a lively look. It is always wanted for a dolphin tattoo to look dynamic in order to present a better picture.

Dolphin Butterfly Tattoo is not so common tattoo because these two animals are considered to be representatives of two different elements from nature: air and water.

Still, the two animals are connected with their free spirit and their nature which cannot be suffocated. They are both adventurous and tend to move a lot during their lives.

There are three top-used designs of dolphin butterfly tattoo. The first is a butterfly greeting a dolphin after he dolphins porpoises out of the water.

There is also one version of this tattoo which is made with a dolphin who has the wings of a butterfly.

The last tattoo is a mix of tribal butterflies and tribal dolphin tattoos, but it is also popular to get the one where the butterfly lands on the dolphin’s nose. This one is really cute so women often choose it.

Sometimes the tattoo artist incorporates these two different elements to emphasize the ability of dolphins to live in harmony with nature and all the creatures.

The tattoo is made as two dolphins which circulate very closely so they remind of the yin-yang symbol. Yin and yang are, according to east Asia, two primary forces that created the universe. One represents earth and peace, the other one air and chaos. However, they are an example of two forces that don’t cancel each other out although they are very different. It is believed that these two forces created planet Earth.

They have to be different to look even more similar to yin – yang. One of them has to be darker than the other. Many people also like to use their eyes as the dots in the “droplets”.

Dolphin heart tattoo is a very popular tattoo by women. One of the reasons for it is its deep meaning which combines the ability to combine harmony and love with family and friends. Usually those that care about their family lives much get it tattooed, but it don’t matter.

Women who get dolphin tattoos like this combination to show their good character and their friendly nature.

This interesting common tattoo represents duality of life, but also balance and partnership. Dolphins are very emphatic and they can feel when the other one is happy, sad and hurting much better than other animals do. They also communicate on a higher level than other animals so they create a much stronger bond.

The dolphins are known as very compassionate animals and will never leave the other dolphins if they are in trouble. That is why two dolphins represent community and strong bonds.

It is often made with two Bottlenose Dolphins coming to the surface of the water, tightly jumping together.

Submarine dolphin tattoos are often made with a submarine near the dolphin.

Sometimes the submarine is even yellow, like in the famous song “Yellow Submarine”, sang by The Beatles. This tattoo would represent the modern connection with dolphins and many people that worked as sailors used to get a tattoo like this one.

Another version includes the complete picture of the underwater scene where a submarine is flowing through the water and the dolphins surround it and swimm alongside.

Men rarely want to get a dolphin tattoo but if they choose it, it will be a tattoo of the lone dolphin but it has to have some other  characters involved in the scene. There are often mermaids or Neptun in the scene.

Sometimes these tattoos include anchors or some other water symbols that make them more manly, however, it doesn’t matter what gender you are in order to get these tattoos.