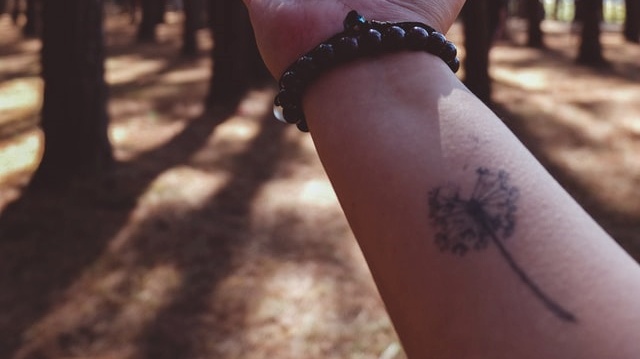 Dandelion tattoos have been growing in popularity in recent years, but what do they mean?

The dandelion is a flower that grows all over the world. It gets its name from the French word dent-de-lion, meaning “lion’s tooth”, because of the jagged edges of its leaves.

The meaning of a dandelion tattoo can vary, depending on the person getting the tattoo. They can represent new beginnings, hope, change, and self-expression. They can also represent freedom and joy.

Let’s look deeper at their symbolism as well as some of the most popular dandelion tattoo designs.

What is The Meaning Of a Dandelion Tattoo?

Dandelions are often associated with new beginnings (a popular tattoo symbolism), because they can grow in the most unexpected places. They represent the hope and potential for new beginnings, no matter how bleak things may seem.

Dandelions are also associated with change. They can grow in any kind of weather, and they always manage to find a way to reach the sun. This can be seen as a metaphor for how people can overcome any obstacle in their lives.

Dandelion tattoos can also be seen as a way for people to express themselves. They are often chosen because they are unique and have a lot of symbolism attached to them.

Dandelions are also associated with hope. They may not look like much, but they keep pushing through until they find their time to shine. This can be seen as an inspiration for people who need some extra motivation in their lives.

Dandelions represent freedom in a number of ways. They can fly in the wind, and they can grow anywhere they want. They often spread themselves far and wide, which can be a metaphor for how people should embrace their freedom. This is a meaning similar to the one people often get from bird tattoos.

People often get dandelion tattoos because they are cheerful flowers that represent joy. They may seem small and simple at first glance, but they bring happiness wherever they go. This makes them great symbols of joy in one’s life.

People who have lost someone to suicide sometimes get dandelion tattoos as a way for them to cope with their loss. The dandelion is seen as an important part of recovery because they are seen as symbols of new beginnings and second chances. This makes them great for coping with trauma or rejection after the loss of a loved one.

The dandelion in full bloom

This is probably the most popular design for a dandelion tattoo. It represents the hope and potential for new beginnings that the flower represents.

A dandelion blowing in the wind

The blowing dandelion tattoo meaning often represents freedom and joy in life. It is a simple but powerful image that can be interpreted in many ways.

A dandelion with roots spread out

This design is often chosen by people who want to represent how they’ve grown since a tough experience in their lives. The roots are symbolic of the person’s strength and how they’ve managed to stay grounded even in the toughest times.

A dandelion with seeds blowing in the wind

This design is often chosen by people who want to represent hope and change in their lives. The seeds blowing in the wind are symbolic of the endless possibilities that come with change.

A black and grey dandelion

This design is often chosen by people who want to represent freedom and joy in their lives. This minimalist dandelion tattoo is simple, but powerful.

These flowers are known for their unique appearance and ability to grow in even the most unexpected places. Here is some more information about these interesting plants:

So, there you have it!

That’s all you need to know about dandelions and their many meanings.

If you have a dandelion tattoo, let us know what it means to you in the comments below.