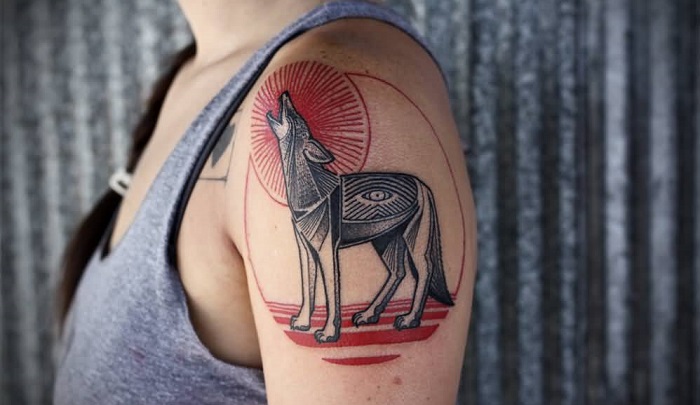 Since ancient times animals were a great inspiration for many tattoo designs. A special importance was given to wild animals, because they could represent people’s strength and bravery. In this article we will talk about coyote tattoos and their symbolism. People have always been afraid of coyotes, but they have also admired them. This animal was found in the mythology of different tribes of Native America.

First of all we have to say that the word “coyote“ is an Aztec word that was used for tricksters. In old Native American cultures, such as the culture of Aztecs or Mayans, the coyote was considered to be a trickster.

Also, these animals were bringing creative energy and music to local tribes and they were teaching people many secrets of the medicine. In many Native American cultures this animal is used as a totem for medicine and healing. It is also believed that coyotes were the animals who showed people how they can make fire.

Sometimes this animal was also associated with sexual pleasures. There was even a belief that the coyote god was using clever words to seduce women. Very often it was believed that coyote was a symbol of fertility so it can bring a new life .

As you can see, there were many stories and myths about the coyotes throughout the history. Coyote had a special reputation among people because they loved this animal but at the same time they were also afraid of it. But, there is no doubt that people admired this animal and its powers.

That’s why since old times many people wanted to have tattoos of this animal on their bodies. In this article we will talk about the coyote tattoo, its meanings and symbolism. We will also give you some interesting ideas and designs for this tattoo.

If you have decided to have a coyote tattoo, you have to know first something about the meaning and symbolism of this tattoo.

We have also mentioned that many legends were talking about coyote’s trickery and greed, his cheating and lying, but also about his sexual side.

There is no doubt that coyote is also a symbol of family and communication. These creatures never go alone. Coyotes usually live in groups and they have a special way to communicate among themsleves. For them family is on the first place and they are ready to do everything to protect their group.

Even though many characteristics of coyotes are negative, there are also many positive things that we can relate to these creatures. Coyotes are survivors and they are able to adapt themselves in each situation. Coyotes were usually learning the hard way, but they were able to transform depending on the situation.

They have always been used as a symbol of survival, strength and health. Coyotes are adventurous and independent. If you can see yourself in coyote and if you have any of his characteristics, then it would be great to have a coyote tattoo.

There are many interesting designs and ideas when it comes to coyote tattoos. If you have decided to have a coyote tattoo on your body, we will give you a couple of interesting ideas. First of all we have to say that tribal tattoos are among the most popular, because they are related to different tribes and traditiones.

If you want to have a special tattoo with coyote that only a few people has, we recommend you to choose the so called outline butterfly and coyote tattoo. If you would like to have a simple tattoo of coyote, without any special details, you can choose a tattoo design called outline coyote.

There are also different tattoo designs with tribal coyote head, so you should look all of them before you decide which is the best for you. 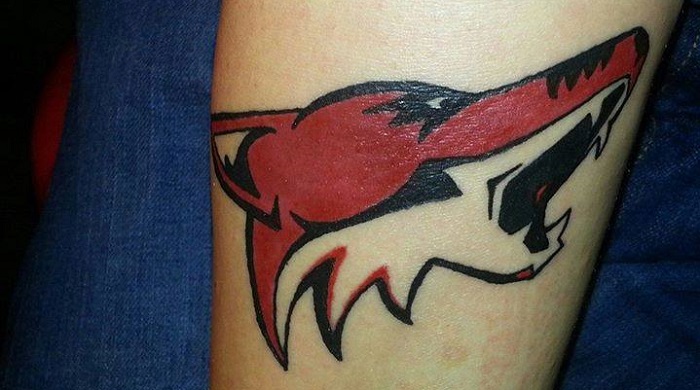 There is also a popular coyote paw print design as well as a tribal dancing coyote. In the recent times many people are doing animated cartoon coyote tattoos, which can also look great on your shoulder or back. It is also important to mention that you don’t need to have a tattoo with only one coyote, but with two or more of them. There is a popular tattoo with two coyots and a deer as well.

These are some of the most common ideas and designs when it comes to coyote tattoos. We hope we have helped you decide which tattoo is the best for you.

Actually, coyote tattoos may be done on almost each part of the body, but the most common places are legs, arms and shoulders. Many people have done these tattoos on their wrists, backs, forearms and other parts of their bodies.

The coyote tattoos are usually made in brown color, but there are also shades of red and yellow. You can also choose black and white coyote tattoo design as well.

There are so many designs, ideas and colors that you can use if you decide to have a coyote tattoo on your body. Whatever you choose, you can be sure that your tattoo will attract attention and it will have a specific meaning.

As you can see, a coyote as a very respected animal in Native America. It was used as a totem and it was considered to be a sacred animal. We have already said that this animal is a symbol of trickstery, but also a symbol of independence, wisdom and bravery. It means that coyote tattoos can represent all of these traits.

As you could see in this article, coyotes are paradoxical beings. On the one side, these animals are tricksters and liars, on the other side they are survivors and teachers. The stories about coyotes can bring important lessons to people. It is believed that there is a little Coyote in all people, which means that all of us have some coyote’s traits.

It was believed that a person who decides to have a coyote tattoo on the body is usually a person who loves to live day by day. This person may want to have great benefits without hard work. This person may also be a trickster, but there is no doubt that we are talking about a strength and brave person.

Now when you know all the traits of coyotes, it will not be a problem for you to understand the symbolism of a coyote tattoo. If you think that you have any of these traits, it may not be a bad idea for you to choose a coyote tattoo for yourself.

As you could see, there are many styles and designs that you can choose, but most important is not to confuse a coyote with a wolf, because these animals are not the same. Because of that we recommend you to go to a certified tattoo artist.