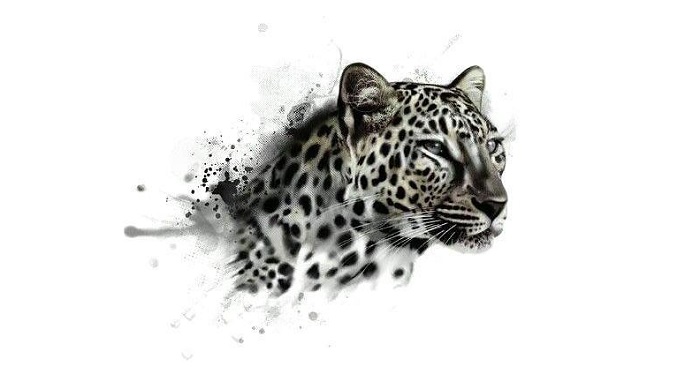 Our tattoos have always a special meaning for us. They may represent our personal traits and also important periods and persons in our lives. There is no doubt that some of the most popular tattoos are tattoos of wild animals. Their ferociousness and wild nature is something that has always attracted people all over the world. That’s why many people are choosing to decorate their bodies with wild animal tattoos.

Which animal will you choose for your tattoo, depends only on your own. But, we will give you some interesting ideas and present you things that you may not have heard about.

Have you ever wondered which animal is the fastest animal on our planet? Well, we have the answer for you. If you think that it is a tiger or maybe a lion, you are making a mistake. The fastest animal on our planet is a cheetah. This is a large spotted cat that lives in Africa, but it can be also found in some parts of Asia. Even though this is a big wild cat, cheetah can be easily domesticated. In the past many rich families had a cheetah as their house pet.

A cheetah was an animal for the elite and it was considered to be a great hunter. This animal was especially typical for British royal families in the past. You may not have known, but there are many families that have this animal even today. A cheetah is a popular house pet in many parts of the world, but there are also parts where it is illegal to possess a cheetah.

A cheetah was a popular motive on many paintings during the Renaissance. There are great masterpieces in which we can see the perfect curves of a cheetah’s body and feel the power of this animal.

However, the symbolism of a cheetah is also present in our culture and everyday’s life. For example, there are many cheetah characters in cartoons and you certainly remember the image of a cheetah from your childhood. It is not easy to forget its perfect spots and body.

However, one of the most popular ways to show the power of this animal is through tattoos. In this article we will talk about cheetah tattoos and their symbolism. There is no doubt that this animal has a strong symbolism in all cultures. You will see something more about its meanings and we will tell you why so many people choose to have this tattoo.

Also, we will present you some of the most popular cheetah tattoo designs and we will give you interesting ideas for your own cheetah tattoo.

There are many different meanings related to cheetah tattoos. If you decide to have this tattoo, you should know that it will attract a lot of attention. If you are a person who loves to be in the center of attention, then this tattoo may be ideal for you.

First of all we will say that the word cheetah actually has the meaning of the spotted one. Of course, it is important to mention that one of the rarest cheetah species is the so called King Cheetah. It is recognizable for its black mane and it has also some other characteristics that are very unusual.

We have already said that a cheetah was a favorite house pet of many royal families in ancient times. Because of that a cheetah is usually considered to be a symbol of power and status. It is also important to mention that many kings and statesmen in Africa are wearing clothes made of the skin of a cheetah.

Not only is a cheetah a symbol of power, but also a symbol of agility, beauty and elegance. This animal is graceful and beautiful, so it can not leave anybody indifferent. Actually, it is usually said that a cheetah is one of the most exotic cats on the Earth. If you decide to wear this tattoo, it would mean that you are a person who attracts a lot of attention.

We can also say that a cheetah is a symbol of agility and seduction. This animal is very intelligent as well.

A cheetah tattoo is a great option for people who are determinated and focused on their goals. Cheetah is an animal which is always focused on its prey and it never gives up from hunting. Of course, we have already mentioned that a cheetah is a symbol of speed as well.

Now when you know what are the meanings related to a cheetah tattoo, you can decide if this tattoo is good for you or you should look for some other tattoos. If you like the symbolism of a cheetah and if it fits to your personality, then you should continue reading this article. We will give you some interesting ideas and designs for you cheetah tattoo, which will make your tattoo even more interesting and attractive.

When it comes to designs of this tattoo, you have to decide if you want to have the entire animal on your body or only a part of it, for example a head or any other part of its body.

However, the most important part of every cheetah tattoo are the spots on a cheetah’s body. Many people opt to have only a Cheetah Print Tattoo. These spots will look very attractive on your skin, regardless of whether which color of the skin you have.

Most people opt to have cheetah spots on their hips, thighs or maybe on their backs. It is recommendable to place a cheetah tattoo on the part of a body where a large group of muscles is. It will look amazing and it will make this tattoo even more realistic. It will look like as if the spots were really a part of your own body. A print of a cheetah can symbolize your animal instincts and your wild nature. These tattoos are extremely popular among some women who want to show their wild and exotic nature.

This tattoo could be great for you shoulder and the upper part of your arm. An angry cheetah tattoo could also be a great choice for inner biceps of a man or maybe for his arm sleeve. Men also usually opt to have a print cheetah tattoo all along the back.

There are also designs with cheetah’s eyes only. Of course, in the background there is a cheetah’s print which attracts the biggest attention. If you decide to have a tattoo with a cheetah that is trying to jump, it could be a symbol of your desire to achieve something and to have progress.

There are also designs in which a cheetah is resting in the tree, so in this case this tattoo may be a symbol of harmony and peace.

You can choose a part of the body where you would like to have this tattoo. It will look great on each part of your body. Don’t wait anymore because your cheetah tattoo will give a great sensation to your body. It will make you even more attractive and people will certainly give you a lot of compliments. As we have already said, most popular are cheetah print designs, but you can choose any other design that you like.

If you decide to have a cheetah tattoo, it will be a symbol of your hidden power and danger that exists deep in your personality.

Also, it will symbolize your wild nature and your agility. Your wild nature may be hidden under your fragile appearance, so nobody can know how powerful you are.

We hope this article has been useful for you and you have certainly found something interesting for your new tattoo. Now you know what a cheetah tattoo means and why many people opt to have this tattoo.

Also, you have seen some of the most popular cheetah designs. We hope that our article helped you find out the real meaning of this tattoo and understand its symbolism.