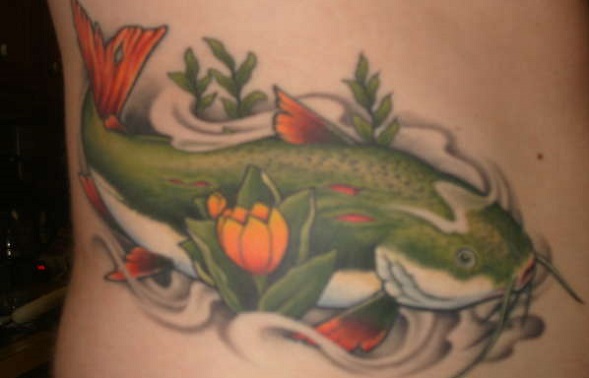 Animal tattoos date back hundreds of years. Our ancestors painted animal tattoos on their bodies to attract the animal strength and abilities into their lives. Animals always played an important part in lives of ancient cultures and they saw them as protectors and guardians of entire clans.

Before there was today’s religion, people believed in the power of nature and the beings living inside it.

They carried special significance and importance in lives of ancient cultures, which is why they would often paint different animals on their skin to show their dedication.

Besides this purpose, animals were there to give us a feeling of hope and strength we so desperately needed to push through difficult moments in life.

In today’s article we are going to talk about Catfish and the significance of its symbolism in tattoo art. So, if you are thinking about getting this tattoo, this article is definitely going to be interesting to you.

Catfish is a freshwater fish who has a very characteristic appearance. Catfish has long whiskers and is by size a pretty large fish. They usually settle between calm and fast river current, and underneath stones or wood remains. Throughout history, catfish as well as other fish sorts, were praised and considered to be holy animals.

An interesting fact, based on archaeological research, is that fish bones, both freshwater and sea fish, can be found in areas that are not geographically close to the sea or river. This shows that fish were traded and that people were buying it too far from their catch. Nehemiah’s book says that the fish was imported even from Tire and sold to Jerusalem. Since the fish would quickly get spoiled, it was obviously sold dried or salted, to preserve it for a longer time.

The catfish appears as a symbol long before the emergence of Christianity and is represented in many ancient cultures and civilizations. The catfish symbol appears in the east and is mentioned in the ancient books. According to the legend, Manu cultivated fish that were growing bigger, eventually dragging over the flood to a safe coast. It would be some kind of connection between the fish and its appearance as a sea sail.

Fish is the embodiment of Vishnu. Manu means a man. Manu is the first priest and victim. Manu is the father of humanity and originates directly from Svayambhua “Self-standing” from Brahma. He is a goddess, identified with Prajapati, the lord of all created beings, and even himself, the supreme soul of Brahma. In Rig-ved, he is called a father’s fault and is said to have given birth to people with his daughter. He passed on the teachings of Upanishad to people.

In Egypt, fish was fresh or dried which was a daily food for the people, was forbidden to any consecrated being, the king or the priest. According to some legends, the divine beings from Busiris move to Chromis, which requires restraint from the fish. The fish is a twofold creature: As a silent creature confusing, hidden, but brilliant under the green Nile, being in the water, was a participant of terrible drama.

Since the first Christians were persecuted because Christianity was not recognized, they had to hide and communicate often with secret symbols that only they knew the meaning. The symbol has the power to connect visible to the invisible.

The first Christians chose a fish symbol for the symbol of faith in God’s Son. Jesus Christ, the son of God, the Savior is written in Greek by Isu Histo Teu los Sotir, and the pronouns of the letters give the word IHTIS, which in Greek Greek means “fish”. The fish symbolizes the souls of the saved Christians.

Catfish is a symbol of an adaptable personality and a human who can easily get along with the changes around. When choosing the right catfish tattoo consider that catfish is also a symbol of instability and destruction, but also deception and chaos. These symbolical meanings are quite negative, so be careful when choosing this tattoo. It can be a terrible idea if you wouldn’t like that kind of symbolism on any part of your body.

However, Catfish can be interesting to people who are looking for something sinister and mysterious to tattoo on their bodies. Catfish usually spend their days lurking from the darkness, waiting for prey to come along so they can attack it. You can use this symbolic meaning and think of a creative tattoo for your body.

Tribal catfish tattoos are also a good idea if you don’t want something traditional or ordinary. Tribal tattoos are interesting because they are able to present an object or animal in such a way, that you can’t surely say what you see in the image. They are almost as modern art pieces, so this is an interesting idea for a Catfish tattoo.

You can tattoo an entire maritime theme on your body, if your goal is to do a larger piece, and catfish is going to be an ideal addition to that. Seas and river bottoms are always symbols of mystery and searching for something that might not be there. If your Zodiac sign is Pisces, Catfish is an ideal tattoo for you, especially if you find yourself to be similar to the character of this fish.

Catfish can be tattooed alone or with other fish. You can tattoo it attacking its prey or lurking it from the darkness.

Watercolor style tattoo with maritime theme is also beautiful and it goes together perfectly with Catfish tattoo designs. Depending on the way you see this animal, you can tattoo it scarier or more tame. This is a great tattoo idea for those who like to fish and spend their days next to lakes or seas.

Some Catfish ideas can very much look like Koi fish tattoos so if you would prefer Catfish over Koi fish, you can still use colorful style to represent this tattoo design more prominently on your body.

In conclusion, tattoo design and idea is something you can surely get off the internet but not as a copy-paste design. If you want something truly unique and representative of you, try to come up with a special concept that is going to be special just for you. This way you are going to get something to remember and be proud off, that is going to be on your body forever.

Catfish has a lot of negative symbolic meanings, so be careful when choosing this tattoo. If your goal is to represent overcoming these symbolical meanings (e.g. chaos), then Catfish is a perfect option to choose. Before making the final decision, consult your tattoo artist and together find a perfect tattoo that is going to fit your desires and needs.