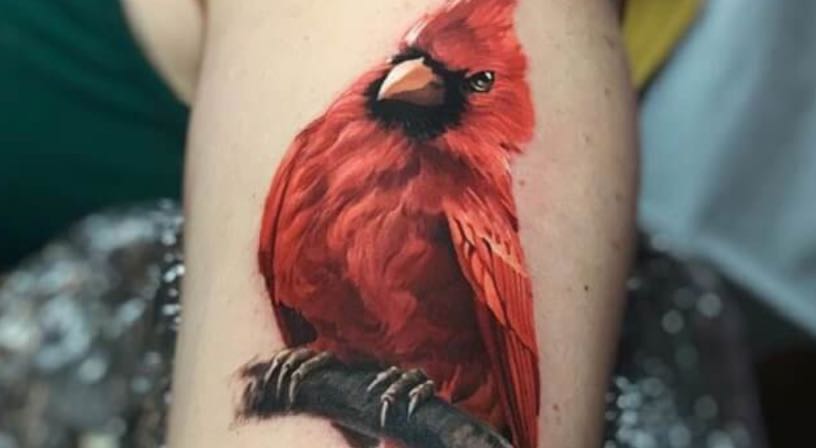 Cardinals are beautiful birds that are known for their vibrant red plumage. They are also seen as symbols of strength, power, and determination in the bird world. When it comes to cardinal tattoo meaning, there are a few different interpretations.

For some, cardinal tattoos represent the cycle of life and death. For others, they’re seen as a reminder to stay strong in the face of adversity. No matter what your interpretation is, there’s no doubt that cardinal tattoos can be beautiful and powerful works of art.

If you’re considering getting a cardinal tattoo, read on to learn more about its symbolism and meaning. You’ll also get some inspiration from our collection of cardinal tattoo designs.

Everything You Need To Know About The Cardinal

The cardinal is a beautiful red bird that is native to North America. The male is especially stunning, with its bright red plumage.

Cardinals are interesting because they don’t migrate as other birds do. This means that they can be seen in the same place all year round. It makes them one of the most recognizable birds in North America.

If you’re thinking about getting a cardinal tattoo, it’s important to know the meaning and symbolism behind this beautiful bird.

The cardinal is often seen as a symbol of strength and determination. This is because they can withstand the cold winters and continue to live in the same place all year round.

The bird is also seen as a symbol of hope and joy. This is because their bright red plumage is a reminder of the beauty of nature and the hope that Spring will come again.

Here’s what the cardinal tattoo means and symbolizes.

The cardinal has long been associated with Christmas time, and the symbolism behind this dates back to Germany. In the past, craftsmen would build birdhouses for these birds as they didn’t migrate and were always present in winter.

Not only are cardinal’s a beautiful sight, but keeping them around was also in the best interest of the bird’s safety. Thus, cardinals soon came to represent all the positive feelings associated with the Christmas holiday, such as compassion, happiness, and hope.

The cardinal tattoo is often seen as a symbol of power. This is because cardinals are known to be very aggressive when it comes to defending their territory.

Both male and female cardinals will fight for hours each day during the spring and summer to make sure that other males do not enter their territory.

Cardinals are also seen as a symbol of grace and nobility. This is because of their elegant appearance and the fact that they are not afraid to stand out from the crowd.

They are known for being very vocal birds, and their unique song is often used in media to represent happiness and joy. In addition, the cardinal’s red plumage is seen as a symbol of good luck in many cultures.

Cardinals are a popular choice for a totem animal because they are associated with happiness, positivity, and energy. People who identify cardinal birds as their totem tend to be optimistic and enjoy life.

If you are feeling sad or down, especially during the winter months, you can call on the cardinal spirit animal for guidance and reassurance.

The cardinal’s vibrant colors are a reminder that even in the darkest of times, there is always light and beauty. As the Dalai Lama said, “Find hope in the darkest of days and focus on the brightest.” When you see a cardinal, take it as a sign that better days are ahead.

If you’re looking for a tattoo that represents strength, determination, hope, and joy, then the cardinal is the perfect choice for you.

The red cardinal is a beautiful bird that has many meanings and symbolism attached to it. One of the most significant red bird tattoo meanings is that of love. This spirit animal often appears to those who are on the horizon of a new relationship or other significant event filled with romance.

For some, the cardinal may also appear during pregnancy as a guide for the new parent. The red cardinal’s spiritual meaning is one of fighting against insecurities and striving for self-empowerment. This red bird is a reminder to stay true to ourselves, recognize our power, and keep moving forward toward our goals.

Cardinals are truly a blessing, especially for those who are struggling with uncertainty. Thus, the red cardinal tattoo is perfect for anyone who wants a reminder to stay strong and keep fighting for what they want in life.

Cardinals are known to be romantic and devoted lovers. Native American folklore believes that if a single person spots a cardinal crossing their path, they can expect to find a romantic partner soon.

For people who are already in committed relationships, cardinal may signify a renewed spark of romance.

Cardinals also serve as a reminder of monogamy, which is an important value in many Native American cultures. The legend of the maiden and the red bird is a popular story that tells of the cardinal’s role as a messenger of love.

The cardinal has a long and storied history in mythology and folklore. In various tales, the cardinal is closely related to the phoenix, often taking on similar symbolism. For example, in Egyptian mythology, the cardinal is often seen as a red bird living in the desert of Arabia.

This bird is seen as a bringer of good luck and is often associated with the sun. The Greeks also believed that cardinal birds were the birds of the sun and that their songs were so beautiful that even the sun would stop to listen.

In Cherokee mythology, cardinal birds are also seen as bringers of good luck and are often associated with predicting the weather. Simple Cardinal bird tattoos have a long history of symbolism and meaning and continue to be a popular choice for tattoos.

The angry red bird is often associated with anger or aggression. Whether you’re a fan of the Angry Birds game or simply have a personality that is often seen as angry, this tattoo design is sure to please.

Wrists and ankles are the most common places to get this tattoo. This tattoo looks great when it is combined with organic ink.

This cardinal tattoo is perfect for couples who want to show their love for one another. The two birds perched atop a branch signify the everlasting bond between two people. Get this tattoo inked on your wrist, ankle, or any other body part to show off your affection for your loved one.

New parents or those expecting a baby will appreciate this tattoo design. The small cardinal bird perched on a branch represents the new life that has been brought into the world. This tattoo can be placed on any part of the body and is a great way to show off your love for your new arrival.

How To Choose The Placement Of Cardinal Tattoo?

Choosing where to place your cardinal tattoo depends on what kind of statement you want it to make. Below are some important aspects to consider in this regard:

Cardinal tattoos are pretty striking, so you want to choose a visible placement. Place your tattoo on your arm or leg if you want everyone to see it. You might consider placing it on your chest or back for a more discreet tattoo.

The size of the tattoo is another factor to consider. A large and detailed tattoo requires a placement that can accommodate it. Places like the back, chest, or thigh are ideal for larger tattoos.

For a smaller, more delicate tattoo, find a placement that is not too bulky. That’s why small tattoos are suitable for the wrist, ankle, and back of the neck.

You must also consider your pain tolerance. Tattoos on the ribs and spine are notoriously painful, so you might want to avoid them if you have a low pain tolerance. Instead, try somewhere like the upper arm or calf, which are generally less painful.

Depending on the placement, cardinal tattoos can take a while to heal. Places like the back and chest take longer to heal, while smaller places like the wrist and ankle heal more quickly.

Consider these factors when choosing the perfect placement for your cardinal tattoo.

When it comes to a cardinal tattoo meaning, there are a few different things that this tattoo can symbolize. For some people, the cardinal tattoo is representative of good luck. In other cultures, cardinal tattoos might be seen as a sign of power or virility.

If you’re thinking about getting a cardinal tattoo, take the time to think about what this tattoo means to you and what you want it to represent. This way, you can be sure that you’ll end up with a tattoo design that you’ll love and be proud to show off for years to come.