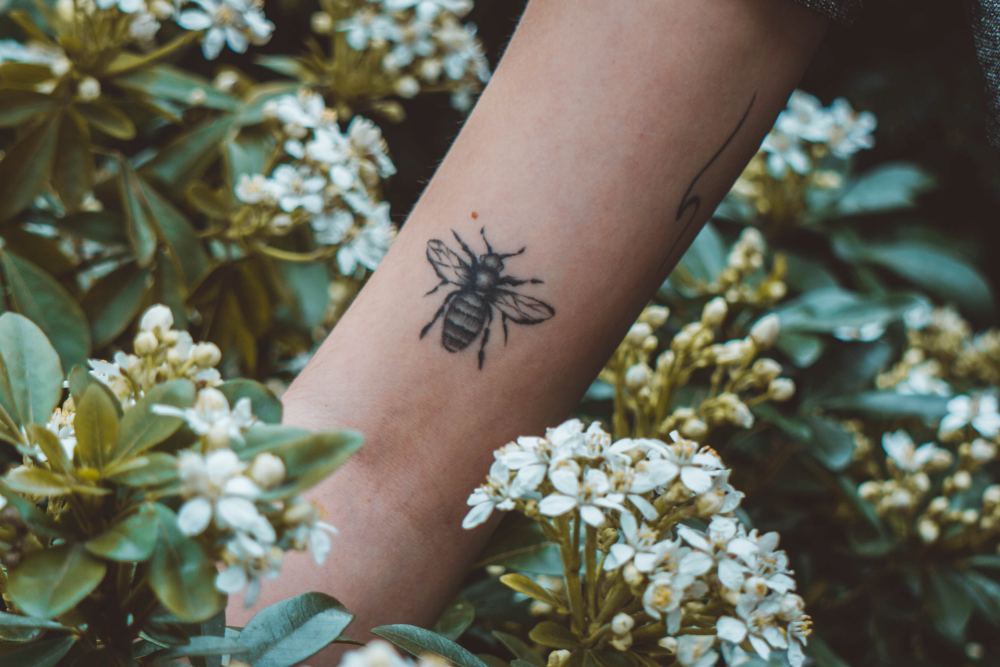 Tattoos are one of the most common ways to express oneself nowadays.

People get tattoos, not only because they like them, but also because they believe that the tattoos have a certain deep meaning and symbolism.

The bee tattoo can be a good choice for those who want to express their love towards nature and people.

In this article, we will try to figure out what bee tattoos really mean.

Bee tattoos can stand for hard work and diligence. Bees are known because of the big amount of work they have to do everyday. During its lifetime, one bee is able to produce only one twelfth of a teaspoon full of honey. So the honey bee tattoo meaning especially is associated with work and collaboration.

Honey bees use pollen as a source of protein and their sole carbohydrate intake comes from honey which they store in the beehive. Bees work like a part of an enormous and complicated mechanism which works for the benefit of the entire bee community.

People with bee tattoos usually want to express their love towards work and diligence, and show that they are always ready to help others.

Bees are famous for the community they live in. Their society consists of three castes: queen, male drones and female worker bees. The drones’ only task is to fertilize the queen bee, but workers have much more responsibility than that.

They do all of the work around the beehive- they feed the larvae, collect nectar and pollen, defend their colony against parasite attacks etc. If someone wants to express his or her love towards family values, a queen bee tattoo can be a perfect choice – this tattoo will show others that you value your family as much as bees value theirs.

People who get a bee tattoo usually want to express their love towards social life and human society in general. The bee community is very unique because it consists almost entirely of females (the only exception is the male drone). The worker bees build honeycomb cells out of wax where one single egg is deposited in each cell.

The newly hatched larva receives food from adult worker bees. This way all the bees provide themselves with baby food! Of course, hard work doesn’t go unnoticed. A worker bee is able to achieve the highest rank in society- that of an egg laying queen bee.

In this symbolism, the queen bee tattoo meaning would be associated with the rewards of hard work and family!

The biggest product of the bee community is honey. Beekeepers are very well aware of how important honey can be for their business. We all know that bees produce honey, but did you know that an individual bee makes only 0.3 gram (0.01 oz) of honey in its entire lifetime?

So why do they make it then? Bees use honey as a source of food during wintertime when there are no flowers available to collect nectar by transforming nectar into honey!

The hard work pays off – not only because every member of the bee community eats, but also because they don’t have to face problems with food supply during harsh weather conditions – although, lately, not even that is enough!

People who get a bee tattoo usually want to express their love towards harmony. They want to show that they agree with the values of cohabitation and peace. These people appreciate good relations, family values, and a hard day’s work done.

Bees are known as diligent and optimistic animals which is why their association with positive things perfectly fits those who want to express their optimism through tattooing!

Bee tattoos are often chosen by girls who want to show their femininity. Although many people perceive bees as rather aggressive insects, they are actually very peaceful creatures. Bees live in hives where work is divided among all the members of the community.

One out of three bees is a virgin female called a worker bee or a neuter bee which has no stigma on its body until it leaves the hive for mating with drones from other hives at the end of summer season (this happens only once in each lifetime).

Bee tattoos are one of the most popular tattoos among women. This is because bees are associated with feminine values such as virginity, motherhood, or maternity, which is why many girls choose this tattoo when it comes to expressing their love for femininity through inking!

People who choose to get a bee tattoo usually also want to express their love towards beekeeping itself. There are many different species of bees in the world today.

The most important ones when it comes to beekeeping are the European honey bee (apis mellifera), the Eastern honey-bee (apis cerana) and some other native American species such as blue orchard bee (oemleria cerana), alfalfa leafcutter bee (megachile rotundata), alkali bees (nomia melanderi) etc.

It is said that there are only seven kinds of occupations in the world – one of them is beekeeping.

Bee tattoos can also stand for love towards nature. Honey bees are one of the most important kinds of insects which directly affect humans by pollinating over 80% of all fruit, vegetable, and seed crops grown in North America.

This way they provide us with lots of healthy food.  Without bees, our environment would be completely different.

Tattoos often have different meanings depending on the culture which uses them. For example, Polynesian people associate tattoos with strength, while Samoan people see them as a way of spiritual self-improvement. Maoris use tattoos as status symbols that show their belonging to different classes.

Tattoos are also used in religions – for example, Hindus consider them to be sacred, while Christians see them as a manifestation of evilness and negative energy.

You can find bee tattoos in many cultures – for instance Asian culture has an association with bees which is associated with diligence, hard work, and death (bees are known as the souls of dead people). When it comes to Celts, however, they believed that every person had their own bee which helped them in hard times when they needed support most.

African tribes believed they could connect with their ancestors through these insects – they wore beehive pendants around their necks because they thought bees would make contact with departed souls on their behalf.

If you are getting a tattoo you should be aware that the meaning can change depending on the culture which uses it. This is why you need to understand the bee tattoo symbolism before getting one so that you can be sure it will have a particular meaning for you.

What bee tattoo design should I choose?

There are many different bee tattoo designs to choose from – you can make a decision based on the size of your tattoo, personal preferences, and the place where you want to put it on your body.

Small bee tattoos look really cute. They can be placed anywhere on the body but they look best when they are on forearms, legs or lower backs because of their size.

Large bee tattoos, on the other hand, look more masculine and bold because of their size. They are best suited on the arms, legs, and back.

Tattoo artists often create bee tattoos in various different styles and they can look really attractive and unique because of this. There is an old school style which uses traditional elements such as cross hatching, shading, or dotwork to create a realistic-looking image of a honey bee. This way the tattoo looks like it was drawn with black ink and its stinger seems large and sharp.

Then there is also the classic American tradition where bees are usually shown holding flowers in their pincers which makes them look cute rather than dangerous.

You can also choose from other styles such as “new school”, where your tattoo will show just its outline without any shading or coloration while the contemporary style will give you a tattoo that is colorful and has blended colors. It usually looks as if it was made from spray paint or ink splatters.

In order to pick the style that suits you best, you should think about your personality, personal preferences, and the location where you want to put your tattoo, and inform your artist. Usually, old school styles suit men while “new school” and contemporary styles look more feminine.

So, what does a bee tattoo symbolize?

Bee tattoos can stand for femininity, hard work, and connection with nature. They can also indicate the person’s love towards beekeeping.

The meaning of a bee tattoo is not universal – it changes depending on the culture which uses it. If you want to get one, make sure you know what kind of message it will send before committing to a final decision.

Bee tattoos can be very meaningful and it is best that you know what kind of message you are sending before getting one done.

I hope this article has given you useful information about bee tattoos so make sure you think carefully before making the final decision!