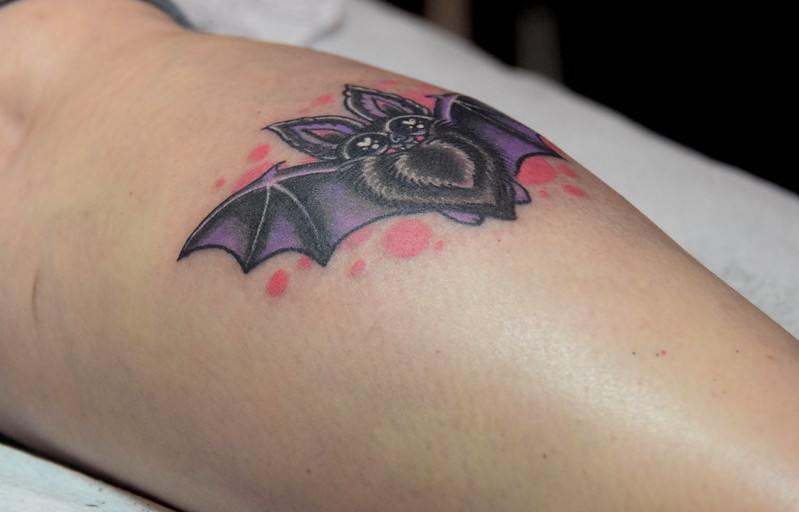 Bat tattoos are fairly popular, and commonly used in many kinds of designs. They can be found as part of a larger piece or even on their own.

Many people see bats as fearsome creatures that should not be trusted due to pop-culture and horror stories, but the truth is they actually symbolize protection and good luck if you’re willing to turn this flying mammal’s image around.

Bats are very similar to birds in the sense of having hollow bones and thin wings, which makes them perfect for flying. However, they are also nocturnal animals that can see exceptionally well in the dark thanks to their eyesight.

Bats usually eat insects but some species prefer fruits or small vertebrates like fish or frogs; they’re not interested in humans at all (while there’s still debate on this matter).

If bats do bite someone, it’s usually because they feel threatened and mistook them for something else. The most famous type of bats are fruit bats, which are the ones you usually find in tropical countries.

Bats are known to have a lifespan of around 20 years on average, although there are some species that can live up to 33 years.

The meaning of a bat tattoo

Bats are one of the most symbolic animals around the world, and even though they’re not as popular as eagles and other birds you’ll find plenty of bat tattoo designs. There are multiple options for the symbolism of a bat tattoo, and we’ll list some of them below:

One of the more common bat symbolism meanings is to see bats as a sign of death and bad omen, but the truth is they actually represent rebirth.

In some countries like China, Mexico, and Japan the bat is known as a symbol of death and rebirth; they say that when someone dies their soul turns into a bat (that’s why popular culture likes portraying bats as vampires) and it can transform back to a human after spending seven years in this animal form.

People all over the world see bats as protectors, which is why many gang members get bat tattoos (among others) to show their allegiance with the group. Many clans used bat tattoos in their flags and family crests because they believed these animals could bring good luck.

The bat’s survival instincts and protective traits make it one of the best choices when it comes to getting a tattoo. The bat lives in darkness for most of its life which makes it hard to spot, but at night time they still come out to hunt or protect their territory from invaders. They usually have a very good sense of smell and can hear anything from miles away thanks to their large ears.

The bat is known for being a stealthy hunter that quietly sneaks up on its victim before landing a fatal bite in the back of their neck. It’s a strong and powerful animal that can survive in many conditions for a long time, which is why it’s also considered as the guardian of the night.

Bats are symbols of good luck and prosperity because they can see well in the dark. This is why many traditional doctors in Africa, Asia, and Europe used to use bats’ eyes to prepare homemade remedies for eye problems.

Their unique way of hunting has made them a symbol of speed since ancient times, which is why people believe that having a bat tattoo will bring them luck and protect them from accidents. Moreover, bats are just as powerful as eagles and many other birds that people see as symbols of good luck.

What does a bat represent in different cultures

Many cultures throughout history have seen bats as a sign of death and rebirth, but the truth is people from different countries see these animals in completely different ways.

Many tribes in Africa consider the bat as an animal with magical powers capable of influencing the weather. African cultures believe that bats are responsible for bringing storms to dances, which is why they use them to decorate their masks and other traditional items.

Aztec mythology: Aztecs used to see bats as symbols of death and rebirth because they look like dark shadows when they fly at night, especially if you’re near rivers or lakes during summer time, it can be really gloomy.

Mesoamerican cultures also believed that the bat is a symbol of fertility and good luck because people who lived in those times believed these animals were hermaphrodites; this is why you shouldn’t kill them if you want to have a baby as soon as possible.

Mayan mythology: The Mayans used bats as one of their symbols because they consider it a guide between the realm of the dead and the living, which is why it’s often seen around skulls and other elements related to death.

Chinese culture: Chinese people see bats as protectors and spiritual guides, but they’re also known for being associated with bad omens like in many western cultures. This goes back to ancient times when most towns were built near rivers or lakes and they used to have a lot of bats living near them.

Japanese culture: Japanese people believe that the bat is a messenger from the gods, but it’s also a symbol of love and happiness since most boys choose this animal as their favorite one.

Many cultures all over the world see bats as good luck charms, but some of these animals are also symbols of death and rebirth. This is why you need to be very careful before choosing this tattoo because it’s not always a positive sign.

Some of the most common bat tattoo ideas include:

Bat tattoo designs are usually black or grey, but you can also see colorful ones if the artist has used bright colors to paint them. The good thing about these tattoos is that they look great on both men and women, which is why they’re perfect for couples who want matching tattoos!

If you understand the meaning of the bat tattoo, and it’s a sign that matches your personality, then this is perfect for you.

Just make sure you discuss all the details with your tattoo artist before he starts sketching something to make sure you get the tattoo you really want.

The bat’s unique way of hunting has made it one of the best choices when getting tattoos; especially if you want to show strength, courage, and wisdom.

Bats are also associated with good luck, fertility, and prosperity, but they’re also seen as spiritual guides that can help you develop your psychic abilities.

Finally, bats are highly respected in most cultures around the world because of their ability to adapt to every situation no matter how difficult it is.

As you can see, the traditional bat tattoo has a lot of different meanings depending on who gets it and for what reason, but there’s one thing that never changes: people see it as a symbol of courage, wisdom, and strength.