It is known that each tattoo on a human body has a deep spiritual meaning. Among many animals, various types of insects can also provide inspiration for great tattoo designs.

In this article you will have the opportunity to find out something about the symbolism of ant tattoos. It is known that people don’t like many types of insects, but ants have never been the subject of the human hatred.

There is no doubt that ants have been a very important part of the human history. They are one of the oldest creatures on our planet. These insects have also an important place in religion.

In the Bible and also in the Quran there are many stories and parables about these hard-working insects.

What ant tattoo may symbolize and why this tattoo is considered to be so powerful? Which secret meanings are hidden in this tattoo? If you are interested in tattoos and if you would like to have one, you should read this article.

We will tell you what ant tattoos mean and what they may symbolize.

Also, we will give you ideas how these tattoos could look like and you will read about the most popular designs of ant tattoos.

We hope you will like this article and it will help you decide if you want to have the ant tattoo on your body.

It is known that ants are forming a colony and they always live together. In general we can say that ants are considered to be strong and hard-working insects. There was the philosopher in ancient Greece who portrayed ants as wise insects that were working hard while other animals were playing. There is a lot of truth in it. Ants divide their labors among themselves and they are also very social.

They are known as great fighters because they will fight even with the insects that are stronger and bigger than them. An interesting fact is that most of these strong and hard-working insects are females. Another thing that you may not have heard about ants is that they are very intelligent.

However, the meaning of ants is different in different parts of the world. For example, people in China believe that ants will bring them compassion and justice, but the situation in Switzerland and also in Bulgaria is completely different.

These people believe that ants will bring them misfortune. In Estonia it is also believed that ants are a symbol of luck, so it is good to see these insects in the house. We will also mention indigenous people in America who considered that ants are sacred animals.

It is also known that ants are usually associated with hard work and endurance. In Africa it was believed that ants can bring people the message from the God. There are also many other symbolic meanings of the ants, but in most cultures ants have positive symbolism.

As you have seen, the most important symbolic meanings of ants are their hard work, teamwork, discipline, organization and strength. If you think that you have any of these characteristics, you may be thinking of having the tattoo of ant on your body.

If you would like to have a tattoo, the first thing you should do is to determine on which part of the body this tattoo could be. Of course, the place of the tattoo on your body will in a great extent depend on the symbolism of a tattoo. If you have decided to have ant tattoo on your body, we recommend you to do it on your arm, shoulder or maybe on your leg. 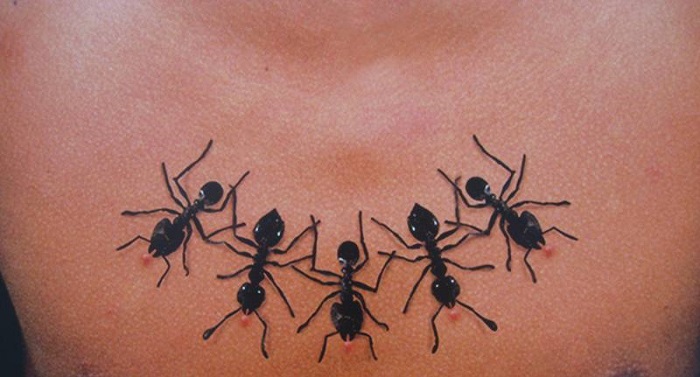 Some people have this tatoo on the abdomen or on their back. But, it is important to mention that there are also people who have this tattoo on their whole bodies.

When it comes to color which will be used for your ant tattoo, many artists choose red and black color. It is also possible to use green, yellow, brown or some other color. Actually, you can choose the color you want for your tattoo, but it would be the best to ask your tattoo artist to help you decide.

When we talk about the design itself, these tattoos may have different styles. You can have the tattoo with only one ant or many of them on your body. Many people want to have tattoos where the ants are crawling on their bodies. 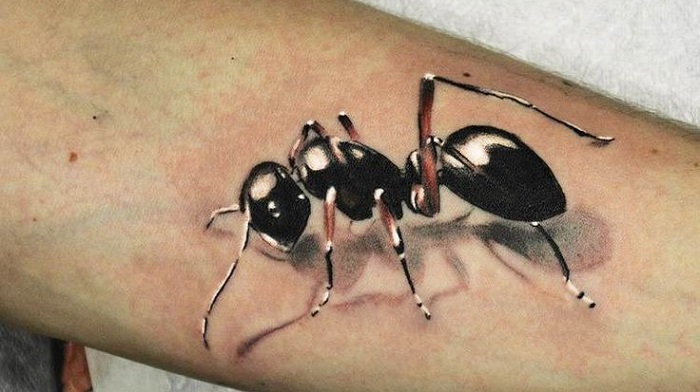 You can also decide if you want to have a tattoo with male ant or with female ant. In both cases the symbolism of these tattoos is the same. Even though the ants are ruled by females, tattoo with a male ant will also be a symbol of strength and intelligence. It is also possible to have the tattoo of an ant and another insect that you choose.

There are also cartoon ant tattoos, which usually symbolize the innocence and frivolity of children. These are usually some motives from popular cartoons, such as for example A Bug’s Life. 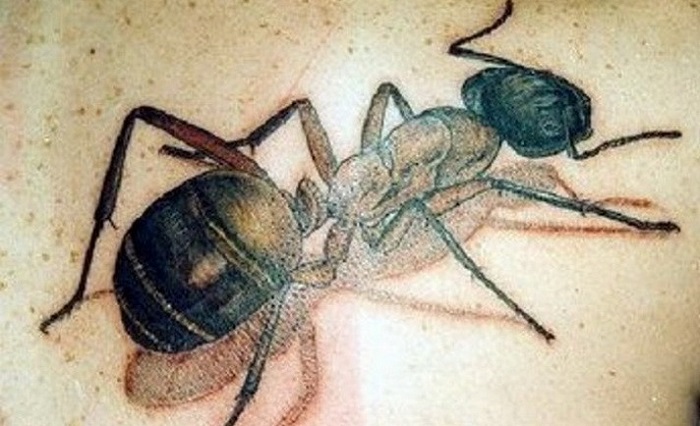 There are also simple ant tattoo designs which are recommended for people who love to have a simple image on the body. There are also 3D Ant Tattoos, which will give you an impression of a real ant that is sitting right on your body. Very popular designs for these tattoos are also ants in combination with leaves, as well as the Ant man, a superhero from a popular comic book.

Of course, of the crucial importance is to choose a good tattoo artist who will be able to portray this tattoo in detail. If he makes any mistake on your tattoo, it could cause a negative impression.

We have also to mention that some people who behave in an unusual way and who have many piercings and tattoos on their bodies, will also want to have the ant tattoo and they choose to have it on their  head or even on their face. Sometimes they want to have these insects on their whole bodies, because it could be a sign of their repulsiveness and freaky nature.

Now when you have seen the symbolism of ant tattoos and something about their design, you have to decide if this tattoo is the best choice for you or you should look for something else. As we have already said, tattoos with ants are usually a symbol of intelligence, hard-work and strength.

Also, they may represent wisdom and loyalty. If you think that you have these characteristics, then it would be a great idea to have the ant tattoo. We hope that we have given you some interesting ideas, so it will not be a problem for you to choose the design you want.