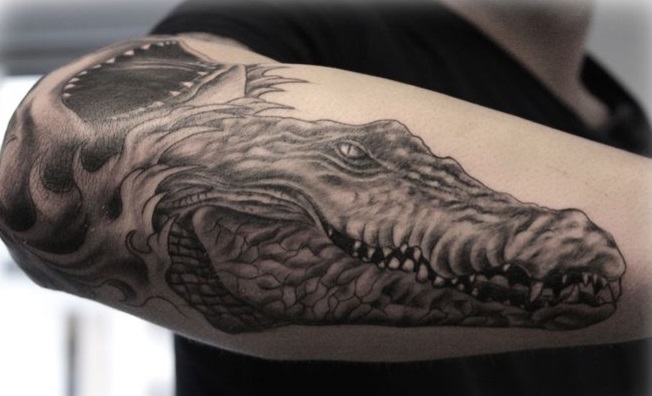 It is known that tattoos hide many secret meanings that usually reveal the nature of the person who wears this tattoo. Sometimes it is easy to understand the meaning of a certain tattoo, but many times it is necessary to think a lot to discover what this tattoo may symbolize and why someone has chosen it. There is no doubt that animal tattoos have always been among the most popular tattoos all around the world.

They had a special symbolism, because it is believed that all people have animal instincts and sometimes all of us are guided by them.

Wild animals are the greatest inspiration for animal tattoos. There are many different designs for lion tattoos, tiger tattoos, snake tattoos, etc.

However, in this article you will have the opportunity to find out something more about aligator and crocodile tattoos. These tattoos have been very popular in the recent couple of years and their symbolism is considered to be very powerful.

In this text we will tell you why many people are interested in these tattoos and what they actually mean.

If you have a plan to decorate your body with a tattoo in the near future, but you don’t have idea what your tattoo could represent, then you should read this article. We will give you great ideas and designs for your alligator or crocodile tattoo, so we are sure that this article will be very useful and interesting for you. If you have decided to put an attractive tattoo on your body, we are sure that alligator or crocodile tattoo can be a great choice for you.

If you are wondering why alligator and crocodile tattoos are so popular, we will tell you something that you may not have known. Actually, these animals are living on our planet since the time of dinosaur. It means that they are among the oldest animals on our planet. They have survived the apocalypse and they have been able enough to adapt to new conditions and environment around them.

Because of that alligators and crocodiles are considered to be symbols of adaptibility and survival. Very often these creatures symbolize the hiddden danger and death that is coming slowly.

But, sometimes crocodiles and alligators have also positive connotation. They can be a symbol of maternal love, because female crocodiles are protecting their nests very fiercely. There is no doubt that these animals are also a symbol of primal instincts and creative forces.

It is important to mention the scaly and strong skin of alligators and crocodiles, which protects them against predators and harsh elements in the environment. Even though these animals are very strong and powerful, they have also their weak sides. The biggest vulnerability for crocodiles and alligators is their soft abdomen.

In old times it was believed that crocodiles symbolized life and creation. In different cultures there were different beliefs related to these powerful creature, but in all cultures these animals had a special symbolism. There was the Egyptian god who was protecting pilgrims from alligators and crocodiles that lived in Nile. It is also interesting that the Egyptians built the whole city, called the city of Asinoe, that was dedicated to crocodiles and alligators. When it comes to Mayans, they believed that the crocodiles were the basis for the Earth to exist.

Actually, they thought that our planet was supported by huge crocodiles. The history also says that native Americans believed that alligators and crocodiles symbolize status and power. We will also mention the symbolism of these animals in Hindu tradition. Among Hindy people crocodiles and aligators are considered to be a symbol of sexuality, emotions and subconscious mind.

You have probably heard of the so called crocodile tears, but you should know that it is not just a phrase that we use or just a myth. It is discovered that crocodiles have special eyelids with lubricant fluids, so we can say that some crocodiles cry. It usually happens when crocodiles are out of water and when they are in danger.

Now when you know symbolic meanings of alligators and crocodiles, it is important to know that these creatures are not absolutely the same. There is a couple of traits that is different between crocodiles and aligators, so the biggest of them is their jaw. It is known that crocodiles have a longer jaw that is V-shaped, while alligators are known for their short and round jaws.

Now when you know something more about the nature of crocodiles and alligators, it is not difficult to realize what the tattoos with these animals may symbolize. Even though alligators and crocodiles are not the same, they both represent danger, fearlessness, ruthlessness and strength.

Also, we have already said that these tattoos may be a symbol of creation, status and subconscious. You may not have known that alligator and crocodile tattoos are usually a symbol of masculine powers and their virility. That’s why in most cases men are doing these tattoos rather than women. Now you will see some interesting ideas and designs for alligator and crocodile tattoos.

There are many different designs when it comes to crocodile and alligator tatoos. These tattoos can be made in a diffferent size and color, depending on in which part of the body you want to have this tattoo.

Also, you can choose tribal patterns of this tattoo or you prefer having these animals as cartoon characters. 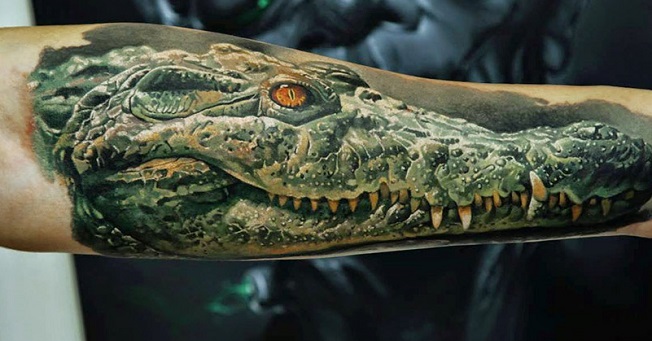 Tribal crocodile and alligator tattoo design is one of the most popular designs when it comes to animal tattoos. This tattoo was especially popular among Native Americans and it had special spiritual messages related to their culture and tradition.

This tattoo is also considered as a symbol of water, nature, virility and masculine powers. If you choose a tribal tattoo design, this tattoo will represent your animal instincts, your strength and your ferocity as well.

On the other side, there are also crocodile and alligator tattoos based on cartoons. In this case these animals may be represented as lovely and kind. There is a cartoon in which the alligator is represented as a small harmless child. This way we can say that if you choose the cartoon tattoo of alligator or crocodile, it will symbolize your innocence and a gentle part of your personality. This tattoo can also be interpreted in different ways. It is true that all of us are kind and gentle, but animal instincts are hidden deep inside all of us.

It is also very important to choose the place on your body where you will put your crocodile or alligator tattoo. These tattoos can be made in almost all parts of the body. They will look great on your arm, leg, back or even on your stomach. Some people have this tattoo on their necks or breasts. When it comes to colors, you can choose between black and white tattoo, but there are also many colorful designs that look very attractive. It is best to ask your tattoo artist for advice.

We hope this article was interesting and useful for you. We are sure that you can understand better the symbolism of these powerful reptiles and tattoos made with them.

As you have seen, crocodiles and alligators have always been great inspiration for people and they had many different meanings in different cultures. But, there is no doubt that people have always been afraid of these animals, because of their appearance and ruthlessness.

If you choose to have a crocodile or alligator tattoo, we are sure that you will attract a lot of attention among people. There is no doubt that a great number of people want to have alligator or crocodile tattoo, especially over the last several years. It may be because of their long history on this planet, but also because of their strength, powers and their ferocity. If you are looking for something unique to put on your skin, then you should think of this powerful tattoo.